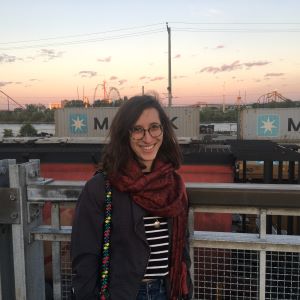 Elizabeth (EB) Landesberg is a filmmaker, producer, educator, and translator. She has collaborated with young people through educational programs, media workshops and community organizations around the world. Most recently, she was one of the producers and editors of the cross-border collaborative documentary Only the Ocean Between Us created through Another Kind of Girl Collective, which had its world premiere at Hot Docs 2021.

EB received her MFA in Experimental and Documentary Arts from Duke University in 2013, where she then taught in the Program in the Arts of the Moving Image for three years. As a Felsman Documentary Fellow in 2014-15, she facilitated documentary workshops with teenagers in Lima, Peru, who researched and created projects about their own communities, families, and cultures. It is with two of these teenagers that the Syrian members of Another Kind of Girl Collective began their first cross-border collaboration, the result of which was the feature film Only the Ocean Between Us.

EB’s experimental and personal films revolve around themes of labor, power, memory, mourning, humor and culture. her latest short film, On the Road and Other Places, screened at Cosmic Rays and Mimesis Documentary Festival, 2020. She was also a Visiting Fellow at the 2019 Skidmore Storytellers Institute, director of the Lewis Hine Documentary Fellows Program from 2015-2021. From 2021-2022,  she worked with Anglia Ruskin University’s StoryLab, where she was one of the facilitators, sound recordists and cinematographers of a film co-created with British veterans and the organization Veterans in Communities, about transition to civilian life.