Stepping Up the Game

Bonnie Harris-Lowe is a nerd with an agenda. A self-declared child-at-heart with a love for animated television, the 2017 Honors graduate attended Comic-Con in San Diego dressed immaculately as Captain America, her favorite superhero. As much as she loves these stories and characters, she believes they can be improved— especially within her greatest passion of all, video games.

“My whole thing with video games,” says Harris-Lowe, “is that representation of women, minorities, and LGBT groups is not good and it’s rarely even there.”

And she’s out to fix it.

First stop: The University of Southern California in Los Angeles. As the recipient of a George Lucas Family Foundation Endowed Student Support Fund for Diversity scholarship, Harris-Lowe will earn a master’s degree in interactive media. She started in August.

California is a long way from Greenville, S.C., where Harris-Lowe grew up the daughter of an African American mother and Caucasian father. During her video game-obsessed childhood, The Legend of Zelda: The Wind Waker became her “superhero origin story.” In the game’s leading lady, Tetra, Harris-Lowe finally saw a good character with brown skin. Then came the pain when Tetra underwent a transformation sequence that left her with the same pale skin as countless other characters.

“I still remember looking at that and feeling just so hurt by it, because these are games I love—these are characters I love,” she says. “So I don’t want people to feel like that!”

She plans to write more stories for women, minorities, and LGBT individuals into video games. “I’ve been writing since I was really little, so it seems natural,” says Harris-Lowe, who also wrote the story and script for a musical produced at USC for Off Off Broadway, a student-run theater group. With her media arts major, she says she can continue her lifelong preoccupation with creating stories, especially in different technological mediums, including video game design.

“There are a lot of jobs available,” she says. “Writer, artist, and coder are the three that everyone thinks of, but there are so many more layers that go into making a ‘big name’ game.” Still, Harris-Lowe knows it’s through creating the stories for games that she can truly fulfill her own imperatives.

It’s a mission she followed with her Magellan scholar research, which morphed into her Honors senior thesis. “It’s all about representation of women and people of color in games, but it’s also about how their representation in games affects how they’re treated by other gamers within the community.”

Harris-Lowe is adamant about changing the perception outsiders have of the gamer community. The belief that teenage boys are the biggest gamers is false. The true demographics are about equally divided between men and women, she says. “Even women in the 18-to-24 age group play more games than teenage boys.”

The racial diversity of gamers reflects the racial makeup of the U.S. population as well, she notes. “So obviously, not homogenous!”

Making inroads won’t be easy, she says. “A lot of the big developers are reproducing a lot of the same narratives, because they sell. They know they have a market and while it’s not all of the market, it is a big market, and even those who do not fit into the demographic will still buy games because we love playing games, and that’s all there is.”

There are other important reasons those exclusions frustrate Harris-Lowe. “Video games have an immense amount of untapped potential as a tool for teaching and as something that can really shape people’s hearts and minds, because so many people do it now.”

Because video games require interaction between product and consumer, they provide a power films and television can’t. “You can get invested in a movie and a TV show, but nothing’s going to put you in the space like a game.” That’s why gaming can “become a good tool for not only teaching, but as an instrument of social change and shaping societal ideals.”

As serious and consequential as gaming can be, Harris-Lowe doesn’t forget that video games are, above all, fun.

“Frankly, the state of the world has been getting me down,” she admits. “In thinking about what types of games I want to make, I realized I want to make lighthearted games that can connect with people in the midst of all that seems to be going wrong everywhere right now. This is my own way of putting light into the world.”

To her, gaming should, and can, always include something positive, whether it’s through the story, characters, or ideas.

“I just think there’s so much they could do if they’ll only step up their game!” she says, delighted with the pun. 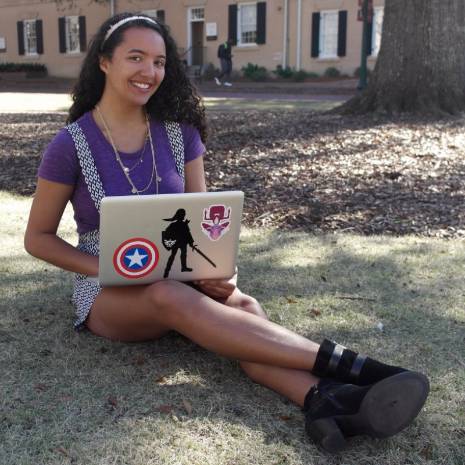