Artist on call: How one art student helps peers develop their own

In the Honors community of scholarship and love of learning, one student has learned that sometimes it’s through helping others develop their own passions that we can learn the most.

Studio art senior Olaf Tollefsen has always loved art: Anime, graphic design and classical pieces are just a few of his favorites. But when he started college, he had no idea that three and a half years later he would be helping other students realize their love for art.

As student curator of the SCHC’s Artists in Residence program, Tollefsen has assisted in running three cycles of the program, working with 23 students over the years. The Columbia native works alongside assistant dean Ed Munn Sanchez to provide students the opportunity to nurture their love for the arts, no matter their form.

“It’s really fun to see how everybody’s approach in art is affected by their studies,” he says. “Just sort of seeing how all these different people are like, ‘Oh, I thought it would be fun if I take this thing from this medium and this thing from this science and kind of merge them together.’”

The Artists in Residence program encourages students to pursue their artistic passions by providing the means to create and display their pieces. Each year, talented students write proposals for and receive up to $750 to create the art project of their dreams.

At the end of the cycle, the projects are displayed in an exhibition at the Honors Residence Hall, with artists making introductory speeches at an opening reception. The artists also get the chance to introduce their art off campus by mingling with artists and creatives around Saturday’s Soda City market on Main Street. Despite it being an art program, the majority of participants major in unrelated fields.

Tollefsen hasn’t been an Artist in Residence personally because he focuses on coordinating everything from an outside perspective, staying away from any bias. His work with the program lasts from start to finish, from recruiting students to setting up the final display. While most students apply via the online application, occasionally Tollefsen runs into a peer he thinks would make a good fit. He and the rest of the committee—overseen by Munn Sanchez and advisor Anna Redwine, herself an artist—typically select around ten students for the program each year.

More important to the selection process than artistic ability is creativity of ideas for a project. The bigger the idea, the better, Tollefsen says.

This year’s group stands out, he says, because of the creativity of projects and formats. For one photography project, a pre-med student has drawn inspiration from her cancer research that uses jellyfish.

Past projects have included a student who developed homemade dyes using fruits and vegetables, while another wrote a short story series based on her experiences as a nursing student.

For Tollefsen, the most rewarding part is seeing students falling back in love with something they may have forgotten.

“For a lot of people, the artistic side sort of falls away once you enter college because you have so much other stuff to do,” he says. “So, having to not worry about that, having the motivation to actually do things that they enjoy, I think they enjoy that a lot.”

Being curator has given him the chance to develop himself as a leader outside the studio. Tollefsen has had to learn how to communicate with artists whose interests lie beyond his familiarity. This, he says, gives him the chance to expand his own horizons and help the students.

What’s next after graduation in May? Perhaps a career in filmmaking, where Tollefsen hopes to merge his love for art and storytelling. Although he hopes to work independently as a printmaker and illustrator, he wouldn’t mind returning to his collegiate experience as a curator for a time after graduation.

“I’m just sort of following the things I enjoy until they lead to something where I’m like, ‘This is what I’m going to do for the rest of my life.’” 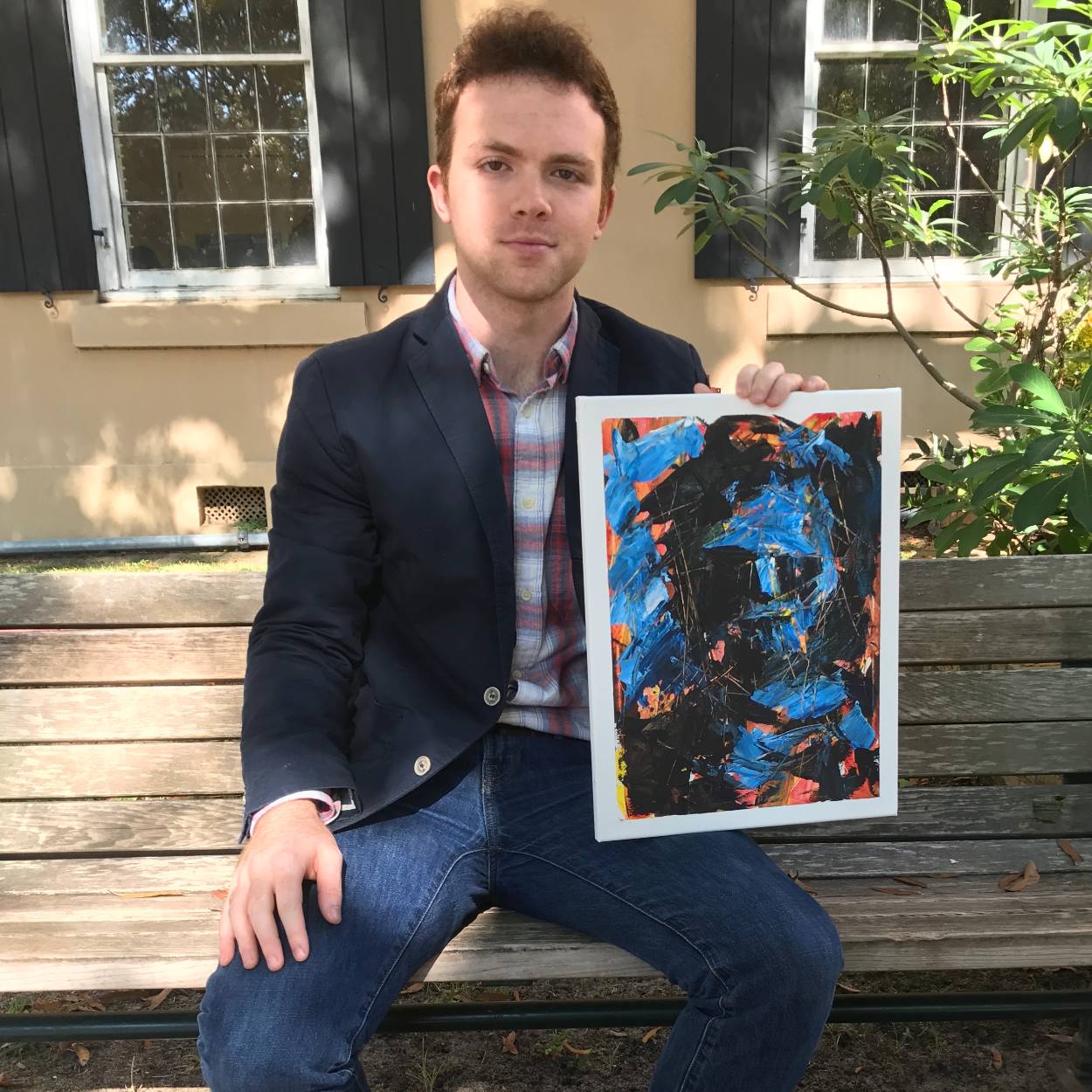 Senior Olaf Tollefsen has always loved art. As student curator of the SCHC’s Artists in Residence program, Olaf has helped other students realize their love for art.