The Emergence of Bedroom Pop

Many little kids dream of becoming rock stars, but Honors College sophomores Evan Delp and Robert Magee are on their way to making that fantasy a reality. Their band, Homemade Haircuts, made a campus splash with the January 2019 release of their first EP, Hold the Door. The EP has reached 150-plus monthly listeners, with more than 2,000 streams on their song “Weather,” composed when Hurricane Florence created time off from class.

Having met as high school seniors at a University of South Carolina scholarship interview, Delp and Magee soon realized they shared a passion for music as well as international business, their intended majors.

“We joked that if we both ended up going to South Carolina that we should start a band,” says Magee, a Sanford, Florida native who also studies management (entrepreneurship) with a minor in Spanish. Delp, from Telford, Pennsylvania, studies supply chain management and minors in French and psychology.

The pair moved into the Honors residence hall later that year, and “became close friends who love playing racquetball and eating brioche bread,” Magee says. Though at first the relationship was mostly non-musical, for Magee, teaching himself guitar was a welcome reprieve from the daily pressures of academic life. By the end of freshman year Delp and Magee had written a few songs together and decided to seriously pursue the band they had joked about before. And thus, inspired by the events of a hot weekend camping in the Everglades, Homemade Haircuts was born.

“Our sound is heavily inspired by bedroom pop and indie rock influences,” Magee says. “Bedroom pop resonates with us because it shows how creative people can get when making full songs within the confines of their own bedroom.”

Delp and Magee both write their music, usually starting with one of them bringing up a lyric or chord progression. “Pretty much every day we send each other voice memos of us humming or playing a rhythm,” Delp says. “I think we’ve both gotten pretty good at knowing fairly quickly whether a demo warrants more development.”

Writing and releasing Hold the Door followed a similar process. The band’s goal for the fall 2018 semester was to finish perfecting their pop/rock sound. During winter break, Magee and Delp met to produce it. “We booked Rob a plane ticket to Philadelphia and spent a little over a week recording and producing the EP in my bedroom,” Delp said.

The duo also visited New York City during the break, providing, in Delp’s words, “a sense of what it would feel like for other people to listen to our tracks as they go about their daily lives.”

Homemade Haircuts’ influence isn’t limited to Spotify, though. The duo hosted a release party for the EP, and played at Garnet & Black’s spring issue release party.

“We hope to play more gigs in Columbia, the Carolinas, and beyond as we explore the concept of what a Homemade Haircuts live set needs to bring to the table,” says Magee. “As a duo, we know that we’re going to have to approach live performances a bit differently than most larger bands, but we’re excited about the creativity we’ll be able to put into it.”

The band plans to release a new EP before August – they’ll be rooming together this summer in Charlotte doing internships - then reunite in the fall of 2020 after both members study abroad.

“Senior year our plan is to live together and work on the album,” Delp says. “I’m very excited for the unreleased songs that we are working on now for our next project. It feels like a progression of our songwriting, our production skills, and an evolution of our sound as a whole.”

As Delp puts it, he and Magee ultimately are just “two bros who love making music and fit guitar jams in between classes when we can. We have no idea where Homemade Haircuts is going to take us and how we’re going to grow as a result—but that’s the most exciting part.” 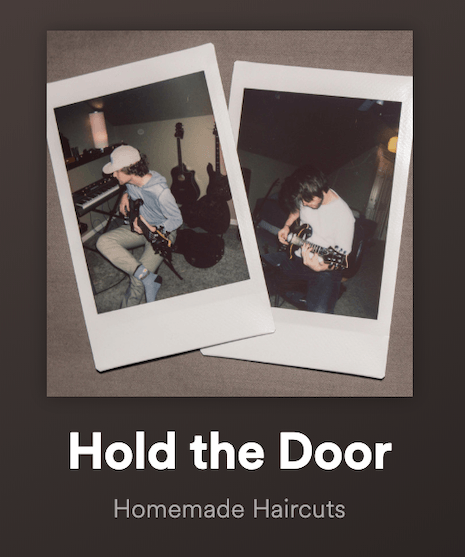 Delp and Magee's first Album Hold the Door is available for streaming on Spotify.