Friends since freshman year, recent graduates Casey Hasenbein and Rachel Wood grew so close during their four years in the Honors College that they can finish each other’s sentences. So it was only natural that the exercise science majors would want to work on their senior thesis together.

“We asked ourselves, ‘What’s an at-risk, under-served population we can help?’” Hasenbein says, explaining that she and Wood didn’t want to write a more conventional research paper for their thesis. Their preference was to continue their passion for health and fitness, and to share it with those who needed it.

Hence the creation of Be Your Best S.E.L.F. (Strength, Energy, Life Skills and Fitness), their thesis project that ultimately bonded them to a group of girls at Epworth Children’s Home in Columbia. It didn’t come easy, and it didn’t come fast, but by the conclusion of their seven-month program, Hasenbein and Wood had learned a big lesson too: Before they could teach anybody about health and fitness, they had to gain their students’ trust.

Showing up Monday night after Monday night eventually drew the younger girls to the older ones. “The first time we hosted they were standoffish and giggling at us,” Wood says. “But later, they came and talked to us and were open. Having consistent people in their lives started to change the girls’ attitudes towards us.”

When they began planning their program, Hasenbein, from New Jersey, and Wood, from Illinois, didn’t know where to find the right group of students in Columbia. Angie Sellers, Wood’s boss at FIT Columbia, suggested Epworth. With Epworth’s permission, an SCHC thesis grant, and help from thesis advisor Barbara Cuevas, a clinical instructor in the Arnold School of Public Health, Be Your Best S.E.L.F. launched. The duo began teaching 10 to 20 high school girls in October.

Wanting to also make it practical and empowering – they knew their students also would be at risk for domestic violence – they solicited help from SASS (Surviving Assault Standing Strong), a Columbia company that provides self-defense training. Wood had taken CEO Shannon Henry’s self-defense course at the University of South Carolina during the spring 2018 semester, and thought her teacher would be a good fit for the Epworth students. Henry quickly agreed.

“We were super-excited,” Henry says. She had recently founded SASS Go, a non-profit arm that provides free self-defense instruction to at-risk populations. Its goal is to reach “every woman, every girl, everywhere,” says Lisa Ewart, the organization’s executive director. By August 2018, Be Your Best S.E.L.F. had two partners—SASS Go and Epworth.

The program alternated focuses from week to week. One week Henry or Ewart would teach self-defense moves or bring in a guest speaker, including representatives from the sex trafficking non-profit Lighthouse for Life. Other weeks, Wood and Hasenbein led the girls in an exercise program, or invited a Zumba instructor to make the girls’ sweat equity a bit more enjoyable.

In their seven months managing their program, Hasenbein and Wood learned that even the best-laid plans may require some change. “We realized we weren’t exactly keeping their attention, especially with the exercise portion,” Wood says. “So, we just wanted to know what would be best for them, and if that meant we needed to restructure a bit, that was okay.”

Using feedback from the students, who come from all over South Carolina, Hasenbein and Wood decided to expand Be Your Best S.E.L.F. to two nights a week, a sign their hard work paid off.

“We’re offering them not only health and wellness and physical activity, but on top of it safety, security, and emotional intelligence,” Henry says. “It’s a well the girls can come back to and get what they need.”

By the time Hasenbein and Wood were wrapping up their program in April, they had come to agree with Shannon Henry that “relationships are more critical than cars and wealth.” Befriending and mentoring the students was more rewarding than promoting a healthier lifestyle, their original intent.

While Hasenbein and Wood are going out of state to physical therapy school after graduation, Henry and Ewart are confident the program will continue somewhere, in some format.

“The fact that we all come in and say, ‘We do care,’ is powerful,” Henry says. “It’s something the girls need to keep hearing.”

During the last Monday night of the fall semester, Wood arrived at Epworth with reindeer antlers, homemade brownies and a box full of Be Your Best S.E.L.F. T-shirts.

After listening to a guest speaker and advising Hasenbein and Wood about how they could improve the program for the next semester, Wood handed the shirts out to the girls.

“The Lotus flower grows out of the mud,” Wood says to the students. “It says that no matter where you came from...

… You can be beautiful,” Hasenbein concludes. The friends were still finishing each other’s sentences. 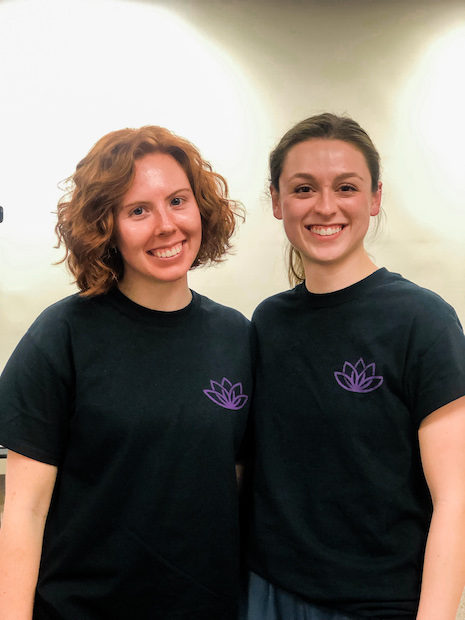 Recent Honors College graduates Casey Hasenbein and Rachel Wood wanted to take a less traditional path when it came to working on their senior thesis. Because of their passion for health and fitness, they created the program Be Your Best S.E.L.F. (Strength, Energy, Life Skills and Fitness) for high school age girls at the Epworth Children's Home in Columbia.