From classroom to craft brewery

Chris Herron, a 2003 graduate of the Honors College and former UofSC athlete, is the founder and CEO of Creature Comforts Brewing Co., one of the fastest growing breweries in America. After gaining valuable corporate experience with large companies like Miller Brewing and Diageo, he took a leap of faith and began creating a business plan for a start-up brewery. Along with two other SEC school graduates, Herron launched Creature Comforts based in Athens, Georgia in 2014.

Their brewery is built on the idea of improvement through curiosity. Herron believes that a curious mind leads to better living – a decidedly Honors College sort of idea.

Herron says, “Connection to purpose and desire to do good for our community has allowed us to attract great people, and [has allowed] for us to have a meaningful impact.”

The results speak for themselves as the company has almost a 100% retention rate for its full-time employees.

Chris graduated from the Honors College with a double major in finance and marketing while being a member of the soccer team. During his time in college, he met his wife Laura – a fellow Honors College graduate and student athlete. He says his college experience provided valuable time management and prioritization skills.

“Learning how to balance the rigors of school with the schedule of a D1 athlete set me up well for life - trying to manage all the different things that pull at you. And I actually wrote my [Honors] senior thesis on how to set beer coolers to optimize profitability so what I was working on then directly led to where I am today,” says Herron.

Having developed an initial interest in homebrews during his college years, he later won the Guinness US Employees Inaugural Homebrew Competition – although he jokes that his experience with homebrews confirmed he was more suited for the business side than the brewing side. Chris’ partners today refer to him as “The Ultimate Warrior” and value his varied experience in finance, sales and marketing. Their partnership demonstrates the success of blending the art and science of brewing with the technical aspects of business.

These skills helped Herron on his way toward a non-traditional career path as an entrepreneur in the craft brewery industry. Like Creature Comforts, he credits his success to curiosity. He also stresses how important it is to never stop learning. In fact, his education did not end when he received his degree. He continues to seek advice and ask questions of people at all levels because everyone adds value to the decision-making process. The Honors College was instrumental in continuing to foster Chris’ intellectual curiosity as he was able to gain the educational foundation to pursue his passion.

“It is great to have an idea on where you want to go, but to also remain open to the fact that there are nearly unlimited paths to getting there.” 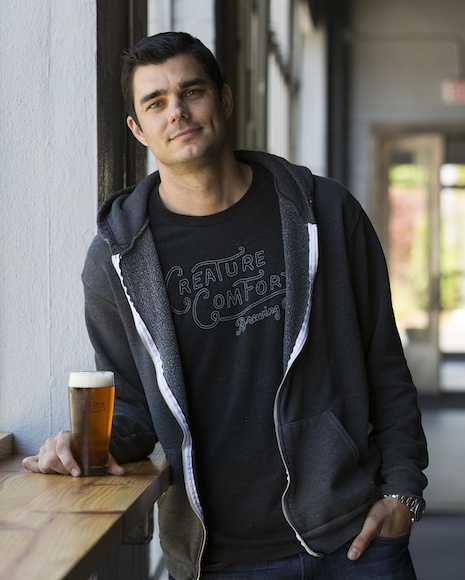 Chris Herron, a 2003 graduate of the Honors College and former UofSC athlete, is making waves in the craft brewing industry as the founder and CEO of Creature Comforts Brewing Co., one of the fastest growing breweries in America.