Everyone who knew him loved him

Don Fowler came with a lot — a lot of stories about politics in America and the South, a lot of wisdom about how to succeed in the world, and a lot of index cards.

Yes, index cards. The beloved veteran of American politics, who was on a first-name basis with presidents, carried index cards. That’s how he learned who his students were, year after year. And after 46 years of teaching at the University of South Carolina, nearly 20 of them in the South Carolina Honors College, Fowler passed away. He died Dec. 15, 2020, at age 85, of leukemia.

“It was the great good fortune of so many of our students to have Don Fowler teach for the Honors College and for the Washington Semester Program,” says Steven Lynn, dean of the Honors College. “How many teachers could arrange a Skype call with a former vice president (Al Gore) of the United States? How many teachers formerly chaired the Democratic Party? To talk with him, you might not guess he had an expansive political career on the national and state level. He was humble, interested in his students, in everyone, and he wanted everyone to know more, to get along, to work to make things better. I’m truly sorry he is gone.”

And so are so many others. From Estonia, where she’s working as a Fulbright English Teaching Assistant, Emily Herd recalled the “iconic” index cards she and other students filled out about themselves and their political interests.

“Oftentimes the cards would be lost and remade throughout the semester,” she says.

To her, Fowler’s attention to those cards, and need to keep them, represented his dedication to his students.

“He would offer to help students however he could, providing them access to his wide range of contacts.”

Herd, ’20 political science, took two courses with Fowler, one on campus in Columbia and the other as a student in the Washington Semester Program.

“He would tell stories from his life during lectures that were straight out of a U.S. history textbook, especially his stories from the DNC during the Watergate scandal.”

But it was his “warmth, wit, and genuine old Southern charm” that endeared him to her and her classmates.

“Dr. Fowler taught me about the value of building personal and professional relationships, even during a tense political climate,” Herd says. “More than once during my eight months in D.C. I would be talking about Dr. Fowler and the other person would reply that they too had a connection to him. It seemed that everyone who knew him loved him.”

Born and reared in Spartanburg, South Carolina, Fowler earned his first degree, in psychology, from Wofford College, in his hometown. Though he earned his master’s and doctorate in political science at the University of Kentucky, the Palmetto State was always home.

“He taught me that all roads lead back to South Carolina, and we must always put country before party,” says Olivia Widenhouse, ’18 political science. “Dr. Fowler taught me the importance of loving where you are from and how to invest in that community.”

Widenhouse, also a Spartanburg native, stayed in Washington, D.C., after her semester there in 2018. Now working as scheduler for S.C. Rep. William Timmons, she still marvels at the time Fowler came into class a little late, talking on his phone.

“He said, ‘Well, Bill, I just walked into my class, so I’ll have to go.’ Dr. Fowler was hanging up on the former president of the United States.”

Fowler’s interest in politics began at age nine, when in 1945 from the back of his horse he watched President Franklin Roosevelt’s funeral train pass through Spartanburg. He shared his learning and experiences in his courses, including “The State of American Politics” and “The Four Freedoms in the 21st Century.” National Chair of the Democratic National Committee from 1995 to 1997, Fowler also managed Fowler Communications, an advertising, public relations and governmental affairs company. He and his wife, Carol, hosted several Democratic candidates through the decades, up through 2020. They knew the Fowler residence was an important place to stop.

“From Dr. Fowler I learned listening is just as important as speaking,” she says. “I learned, even in politics, simple kindness and compassion can go a long way, and when you lead with those, you’ll accomplish much more.”

That Fowler was espousing those ideas during the virulent 2016 presidential election was surprising to McKenna, an Atlanta native, and her classmates.

“He easily could have let being a longtime Southern Democrat get him down, but he always believed in valuing all of our opinions and thoughts, regardless of students’ politics. It opened up avenues for discussions to be deep and interesting and productive.”

Now reporting for WRCB-TV in Chattanooga, Tennessee, McKenna recalls Fowler as “quiet and contemplative, but never in a way that made you feel he wasn’t listening.” When he did speak, everyone listened.

“You knew to hang on to his words,” McKenna says. “He had this way of casually dropping into conversation history-making stories he’d been a part of like they were nothing. He really was a living piece of history.”

Fowler would fly to Washington one day a week as a guest lecturer, flying back after class.

“Honey, call me a You-Ber,” he’d request of a student after class ended, Widenhouse says.

She, Herd, and many other students, alumni, and Capitol Hill staffers attended his surprise retirement party at Union Pub, a popular restaurant and bar. But the truly popular one was the guest of honor.

“He appeared touched that we would want to celebrate his long engagement with the program,” Herd said. “I will always remember the look of joyful astonishment on his face.” 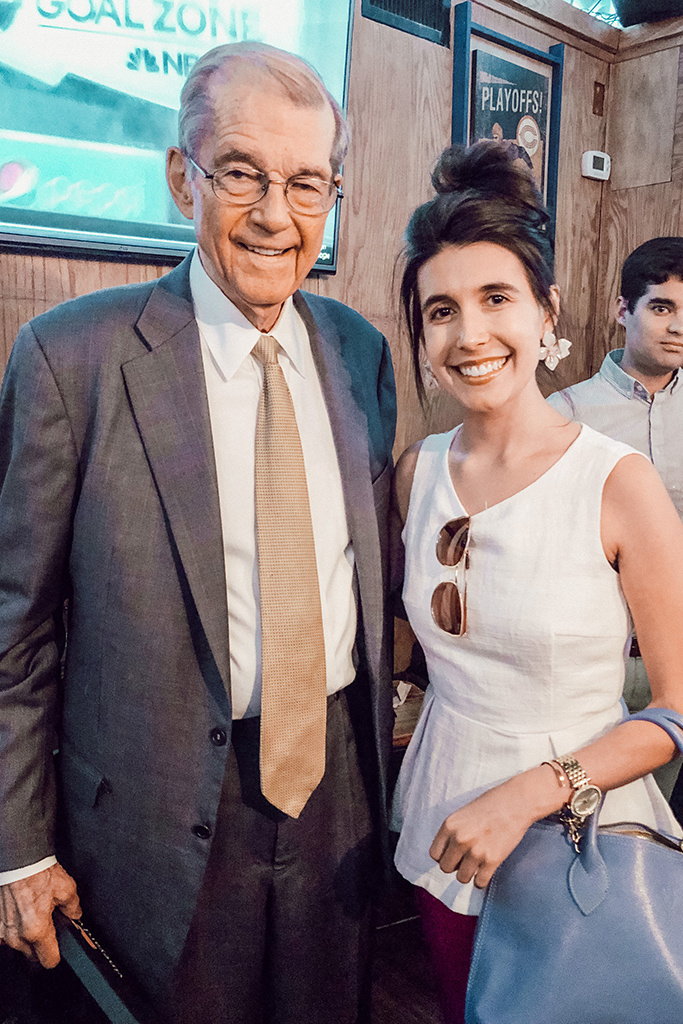 Don Fowler's commitment to the South Carolina Honors College and the Washington Semester Program was unparalleled.