An issue of moral urgency

Maybe it’s to be expected that women’s names would dominate the life story and memorialization of Dr. J. Marion Sims. South Carolina-born and South Carolina College-educated, Sims is the “Father of Gynecology” after all.

Besides Betsey, Lucy and Anarcha, the enslaved Black women he conducted his experiments on in 1840s Alabama, there’s Mary Smith, one of many Irish immigrants he operated on after he moved to New York in 1853.

But there’s a new name to be added to the many that swirl around the controversial doctor, who famously didn’t use anesthesia when practicing his surgical techniques on oppressed women. That name is Nicole Chandonnet. In her senior thesis, the 2021 South Carolina Honors College graduate lays bare the white supremacy that undergirds the whole story of Sims and his memorialization in Columbia. It’s a story of massive ironies, one that connects the plantation mentality of the 1800s with the eugenics movement of the early 1900s, threaded together by a patronizing view of womanhood many today find abhorrent. Recipient of the 2021 William A. Mould Senior Thesis Award, Chandonnet researched why and how Sims is memorialized on the South Carolina statehouse grounds and the University of South Carolina campus. Her work brings to light the names of lesser-known women, those who sought to promote Sims for their own purposes. Download and read the thesis»

“Nicole’s thesis examines an issue of moral urgency for the University and broader community: the board of trustees asked the state legislature in June 2020 for permission to rename Sims College in repudiation of the white supremacist implications of the tribute,” wrote history professor Thomas Brown in his nomination letter for the award. “The research culminating in Nicole’s thesis is the most thorough historical investigation of the naming of Sims College in 1939 and the antecedent dedication of the Sims Memorial on the grounds of the South Carolina state house in 1929 in existence. Her work identifies new dimensions to the disturbing act of commemoration.”

“Disturbing” is a good word for Sims’ practice of operating on Black or “unfit” women without anesthesia. Believing – as many White people then did – that Black people could endure pain better, he also withheld anesthesia because it was in its infant stages, and speed and dexterity were considered more important for patient care. Still, “unsettled” is how Chandonnet felt when she learned that Betsey, Lucy and Anarcha were expected to continue with their domestic chores while under experimentation. Anarcha survived 30 surgeries.

“They were treated as specimens for him to test his new discoveries,” Chandonnet said. “They never lost their identification as slaves.”

Though Sims left South Carolina in 1835 and never came back, even living in London during the Civil War, his surgical breakthroughs and medical inventions made him a source of pride for the Palmetto State. As White South Carolinians began erecting monuments to memorialize the Confederacy in the early 1880s, members of the South Carolina Medical Association began casting about for someone in their profession to memorialize. Sims, dead since 1883, rose to the top of the list.

Chandonnet tracked the SCMA’s decisions, successes and failures in building the monument on the state house grounds. Reading its monthly journals from 1905 to 1940, she learned that the doctors couldn’t stay on task or raise the money. But their wives could. Led by the unstoppable Daisy Lee Stuckey, wife of Dr. H.M. Stuckey, the Woman’s Auxiliary to the SCMA got the job done in fewer than three years.

White women played a huge role in creating the Lost Cause narrative, Chandonnet writes in her thesis. And the women of the auxiliary believed, with their husbands, that women should aspire only to being wives and mothers. They also believed the “feeble-minded” and “unfit” should be sterilized. Black women, too, should be sterilized – all tenets of the 20th century eugenics movement. Sims fits into the eugenics movement in an unexpected way, she discovered.

“He cured Black women who had vesicovaginal fistulas, an ailment that prevents reproduction; he did the opposite of sterilizing Black women,” she said. “But they were enslaved. And by curing the ailment, he ensured these women could have more children. His surgeries perpetuated slavery and secured White plantation owners’ position of dominance.”

Daisy Lee Stuckey may have influenced another woman, her admirer Ethel Green Blatt, who influenced Sims’ memorialization on the university campus, Chandonnet theorized. Ethel Blatt was married to Sol Blatt, South Carolina Speaker of the House from 1937 to 1946 and again from 1951 to 1973, and a member of the university’s board of trustees. In 1939, when a new women’s dorm was built, it fell to the trustees to name it. Reading Mary Baskin Waters’ 2002 dissertation, Chandonnet learned the women students had voted to name the building for Frances Guignard Gibbes Keith, the university’s first woman student and a successful poet and playwright. But the board voted to name it after Sims. Another women’s dorm was named for Wade Hampton, a Confederate hero and governor.

“When naming a building, people get up in arms,” Chandonnet said. “But what you learn from reading the board of trustees minutes is they needed a name for a building. They didn’t give it that much thought. They deliberated it, didn’t include the deliberation in the minutes, and then they voted. It’s not that deep. You think, ‘these nasty people had such malicious intentions or that they really wanted Sims,’ but neither are true. They needed to name some buildings. I’ll take that with me – sometimes there’s not that much to it.”

Chandonnet cites 91 sources for “Memorialization of J. Marion Sims in Columbia, South Carolina.” Besides board minutes and biographies, she plundered back issues of the Daily Gamecock and the South Carolina Collegian, a newspaper published by literary societies, and the Solomon Blatt papers in the university’s political collections. She also interviewed Jazmyne McCrae and Claire Randall, leaders in the movement to repeal South Carolina’s Heritage Act, which protects monuments in the state.

“Overwhelming” is her word for the research.

“As I was collecting information, it was like ‘where is this going? I don’t know, but I’m writing it down,’” she said. “While I was in the thick of it, I was thinking I can never be a historian. But when it came together, it was so fulfilling.”

America’s racial reckoning brought on by the murder of George Floyd gives her thesis immediate relevance, she said. She believes the Sims monument should ultimately be removed, but that contextualizing it is a solid first step. Her thesis includes language she composed to give the monument and dormitory historical context.

“When you have landscapes or buildings that honor white supremacy, you’re creating fertile ground for acts of violence,” she said. “That’s how I see it.”

A Nashville native, Chandonnet is taking her undergraduate degrees in economics, history and political science to Washington University School of Law in St. Louis. Public interest and civil rights interest her.

“I hope to take some of the skills I learned in history and help people in real time,” she said.

Meanwhile, she’s ruminating on the broadest lesson of all. “There’s still so much to be uncovered in our state and history in general,” Chandonnet said. “Who would think that from research on one monument I could produce a 65-page paper? You don’t have to go very far to find cool and meaningful things.”

The William A. Mould Senior Thesis Award, which includes a $1,000 prize, is given annually by the family of the late Dr. Mould, a cofounding dean of the South Carolina Honors College. It represents the thesis believed to have the strongest impact on the winner’s field of study. 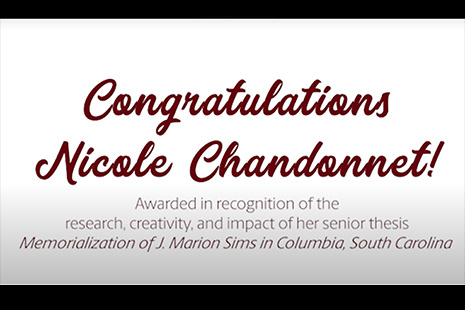 Presentation of the 2021 William A. Mould Senior Thesis Award by Lucille Mould