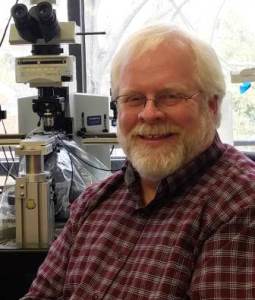 Research in my laboratory is directed toward understanding how synaptic transmission between excitatory and inhibitory nerve cells in the brain is modified as a result of experience. We have focused on neurons in the limbic system, mostly the hippocampus. The hippocampus plays important roles in learning and memory, as well as in pathological conditions, such as epilepsy, schizophrenia and Alzheimer’s disease. We are investigating changes in synaptic transmission that occur in the hippocampus in temporal lobe epilepsy. For example, one project in the laboratory examines how changes in the function of specific excitatory glutamate receptors, called kainate receptors contribute to development of the epileptic state. Another project is aimed at defining alterations in dopamine receptor modulation of synaptic transmission in temporal lobe epilepsy. Other projects examine inhibitory synaptic transmission in epilepsy. These studies are carried out using electrophysiological, behavioral and immunological techniques as well as magnetic resonance imaging. Viral mediated gene transfer is used to manipulate the expression of specific proteins in the brain in an attempt to restore normal function in epileptic animals. We hope that by better understanding changes in the epileptic brain we can develop novel therapies to suppress epilepsy.