The American Medical Association (AMA) has presented William H. Hester, M.D., with the Benjamin Rush Award for Citizenship and Community Service for a lifetime of service to his country and community.

The award recognizes physicians who have gone above and beyond their professional call of duty to make an outstanding public service contribution. Hester, who has served as assistant dean of medical education for the University of South Carolina School of Medicine Columbia’s Florence Regional Program since its creation in 2014, is the first physician from South Carolina to be awarded the prestigious award.

“As a high school teacher, battalion surgeon in Vietnam, family physician and trailblazer, Dr. Hester has spent his entire life leading and serving,” said AMA President Patrice A. Harris, M.D., M.A. “Across 55 years of medical service, he has distinguished himself and improved the lives and health of the people around him. It is an honor to present him with this award.”

Hester earned his medical degree from the Medical University of South Carolina, and, after serving in the U.S. Army as a battalion surgeon in the Vietnam War, he served as a brigade surgeon at Fort Jackson in Columbia, S.C.

He then spent more than a decade as a family physician in Timmonsville, S.C., where for a time he was the only doctor in the town. He was also active with the town council and organizations such as the American Red Cross. After practicing family medicine for 12 years, he established a family medicine residency training program at McLeod Regional Medical Center in Florence, S.C.

In 2014, Hester was instrumental in the creation of the School of Medicine’s Florence Regional Program, which was developed to provide a hands-on clinical experience for third and fourth year medical students with an interest in primary care. The goal of the program is to help address the shortage of primary care providers in rural and underserved areas of South Carolina.

Throughout his career, Hester has been honored with several recognitions including S.C. Family Physician of the Year, Pioneer Award for Excellence in Health Care and the ACGME Parker J. Palmer Courage to Teach Award, given to program directors who find innovative ways to teach residents.

He was awarded the Order of the Palmetto in 1990 by then Governor Carroll Campbell. The honor is the highest civilian award presented to a person who has made significant contributions to the state of South Carolina.

Les Hall, M.D., dean of the UofSC School of Medicine thanked Hester for his dedication to both his profession and his students. “Throughout the 55 years of his medical career, Dr. Hester has served as a role model as a physician, teacher, and community leader. This award appropriately recognizes the amazing positive impact his life and service have had on thousands of individuals,” he says.

Hester received the award during the opening session of the 2019 AMA Interim Meeting in San Diego in November. He described receiving the award as a family affair.

“All my children, their spouses and three of my four grandchildren were with me and my wife, so that made it even better. To receive this particular award is a big accomplishment,” he says.

Hester plans to retire at the end of 2019. “This is a wonderful honor that I and my family will treasure forever," he says. 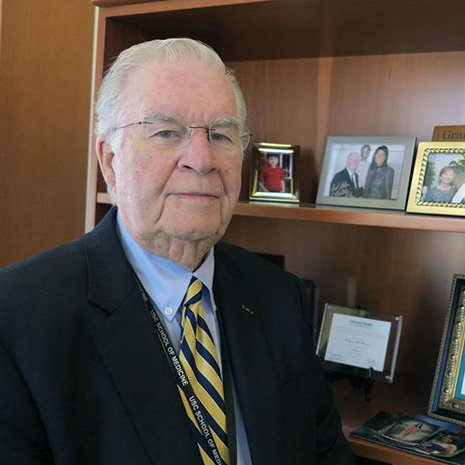 Dr. William "Bill" Hester is the first physician in South Carolina to be awarded the AMA's Benjamin Rush Award for Citizenship and Community Service.