Alumnus recalls how military service led to a career in medicine

Robert ‘Bob’ Crane was a member of the University of South Carolina School of Medicine Columbia's inaugural class, which graduated in 1981. Crane had never entertained the idea of becoming a doctor, at least not until after he spent time in Vietnam working alongside two flight surgeons.

“I dropped out of college after two years and enlisted in the Army to attend operating room technician school,” Crane recalls. “I had to go through basic combat medic/hospital corpsman school as a prerequisite.”

After that, he went through a 40-week program to become a clinical specialist. Crane was then sent to Fitzsimmons General Hospital in Denver where his job was to take temperatures.

Crane ran a clinic at Soc Trang Army Airfield, where he and two flight surgeons provided care to the pilots and troops. He also flew as a medic with Dustoff, the Army’s helicopter ambulance, used for emergency patient evacuation of casualties from a combat zone.

“Flying was quite exciting, sometimes a little too exciting, after all we were in combat,” he says, “but I earned my permanent air crew member wings. I can still hear a Huey a mile away!”

Working with the flight surgeons inspired Crane to think that medicine would be a good career for him. After nearly three years of service, Crane returned to college under the G.I. Bill and earned his bachelor’s degree in biology from California Polytechnic State University. His Army training allowed him to become a licensed vocational nurse, LVN, also known as a licensed practical nurse. He made his way to Guadalajara, Mexico, to begin medical school, where a friend talked constantly about his love for his home state of South Carolina.

It was during this time that the University of South Carolina School of Medicine was being formed with assistance from the Veteran’s Administration and veterans were being encouraged to apply. Crane applied and was accepted into the inaugural class.

There were some challenges, as the class was delayed by one year while accreditation was completed. Crane spent that time working as a nurse for what was then Richland Memorial Hospital, now Prisma Health-Richland, and with a residential substance use program. He also had the chance to work with some big-name acts as a stagehand at the Carolina Coliseum.

“The most famous performer I set up for was Elvis Presley,” says Crane, “but also Fleetwood Mac, Diana Ross, Lynyrd Skynyrd, even Lawrence Welk.”

In the fall of 1977 Crane and his classmates began their journey. Crane admits that medical school was not easy and required much more time hitting the books than he had ever experienced.

“The amount of material you have to learn is truly immense,” he notes. “The days of cramming the night before an exam were over. We had no previous classmates to let us know how we were doing.”

While the program was tough, Crane credits the late William Poteat, Ph.D., professor of anatomy, who joined the School of Medicine in 1974 to help establish the program, with bringing levity to their studies.

“He understood what we were going through, and he asked the class the old joke ‘Do you know what they call the person who graduates at the bottom of the class in medical school – they call him ‘doctor!’” Crane laughs. “We were greatly reassured!”

Crane remembers that several members of that first class were Vietnam veterans like himself – two Navy pilots and an Air Force pilot, as well as the captain of a Navy destroyer.

“We were several years older and more experienced than our non-vet classmates, who we referred to as the ‘whiz kids.’” he says.

After graduation in 1981, Crane returned to California to complete a residency in family medicine at University of California-Davis Sacramento Medical Center. Because of his experience in Vietnam, Crane thought emergency medicine would be his specialty of choice.

“Being a medic in combat was the defining experience for me. Vietnam was baptism by fire, and it made a lasting impression on me,” he says.

“I had been accepted into an orthopedic residency at Richland, but decided against it,” he recalls. “There were only a handful of emergency medicine residencies at the time, all in big cities, so I decided that family practice would give me the training I needed for emergency medicine.”

Crane eventually became board-certified in both family and emergency medicine.

“Emergency medicine is gritty, it is dirty, it is chaotic and yes, it is intense,” he says. “I wanted to make an immediate difference in people’s lives,” he says.

May 2021 will mark the 40th anniversary of when Crane and his classmates made history by becoming the first students to graduate from the UofSC School of Medicine. Today, Crane is retired from practice, and enjoying life with his wife on a small ranch outside of San Jose, California, but he has fond memories of his time in the Palmetto State.

“We enjoyed spending time at Edisto Beach Hunting Island,” he recalls, “and my daughter was born in South Carolina. She had a southern accent for several years after we moved to California.”

He received much gratification from his chosen path and shares this thought with veterans who may consider pursuing a career as a physician.

“It’s a minimum seven-year commitment between school and residency,” he says. “If you’re married, be sure your spouse is on board with you. Ultimately it is an incredibly satisfying career. You get to directly help people in a more profound life-changing way than most careers.” 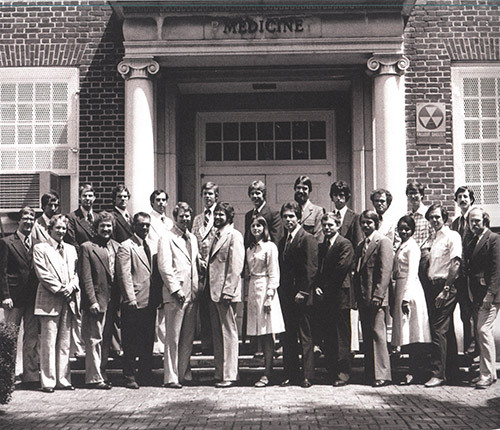 Bob Crane (back row, fifth from right) was one of the first students to attend the School of Medicine Columbia. He and 23 classmates began classes in the fall of 1977. 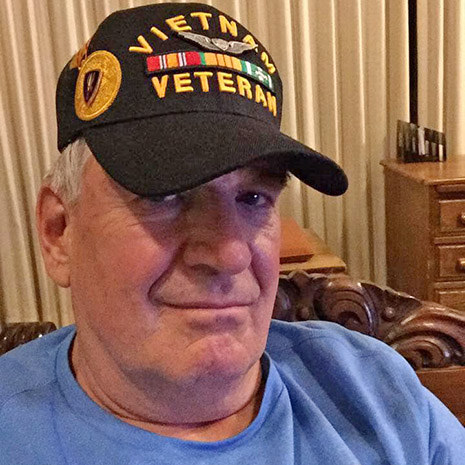 Bob Crane, M.D., served in Vietnam before enrolling in medical school at the University of South Carolina School of Medicine. In Vietnam, Crane ran a clinic at Soc Trang Army Airfield, where he and two flight surgeons provided care to the pilots and troops. He also flew as a medic with Dustoff, the Army’s helicopter ambulance.