A legacy in more ways than one

Grace DeMarco, M.D., may come from a family of health care providers – after all, her grandfather, her father and her brother are all physicians, and her mother is a nurse – but ,when it was time to choose her own career path, she did not let her family’s career choices sway her decision. DeMarco joined the University of South Carolina School of Medicine Columbia because she wanted to incorporate her love of the sciences along with taking care of people.

Grace completed her medical degree with the Class of 2020 and is now headed to Medstar Georgetown University Medical Center in Washington D.C., for a residency in pediatrics and internal medicine. It is the same hospital where her grandfather, William Brannon, M.D., completed his residency in neurology. His career as a neurologist while serving in the U.S. Navy led him to the National Naval Medical Center in Bethesda, Maryland, where he established the Navy’s neurology residency program. After 20 years of naval service, Brannon joined the faculty of the UofSC School of Medicine, where he spent another 20 years sharing his vast knowledge in neurology.

Grace’s father, Paul DeMarco, M.D., a member of the Class of 1989 and a clinical assistant professor of internal medicine at the School of Medicine’s Florence Regional Campus, completed his residency at the University of Virginia in internal medicine. He spent 14 years working in rural internal medicine practice in Marion, South Carolina, before accepting a position as medical director for the physician assistant program for Francis Marion University. He also is a staff physician for HopeHealth, a community health center serving the Florence area.

Grace’s mother, Debbie, a school nurse, is a 1985 UofSC School of Nursing graduate, and her brother, Ben DeMarco, M.D., is completing a fellowship in pulmonology and critical care at the University of North Carolina-Chapel Hill after graduating in 2017 from the UofSC School of Medicine Greenville.

Paul DeMarco says he was surprised when both of his children decided to go into medicine, and he cherishes the moments when he hooded Ben upon his graduation from medical school and presented Grace with her white coat when she entered medical school.

“We’re the kind of parents who didn’t put guardrails around our kids,” he says. “I thought Grace might be a lab scientist and that Ben might be an engineer. We were comfortable letting them choose their own paths,” Paul says.

Grace had a wide array of experiences in liberal arts before she chose medicine. “I took Chinese, studied abroad in Italy and spent a summer in Israel,” she says. “I studied religion and considered law school.”

Then she decided to take a few summer science courses. “I realized I really loved both the sciences and humanities and thought medical school would be the best way to incorporate the sciences into taking care of people. I knew that if I went into medicine, it was 100 percent my decision.”

She also spent a year at Trident Health in North Charleston, South Carolina, as a scribe where she experienced what practicing day-to-day medicine looks like. “That helped solidify my decision to go into medicine,” she says.

Grace is grateful to her parents for being so open-minded and providing her with so many varied experiences. “They never said anything other than ‘we support you.’ That allowed me to explore all the avenues and make the decision more meaningful and the right decision for me,” she says.

Grace and her father also shared a unique experience during her fourth-year rotations. Her father had dreamed of visiting Africa after reading Cry the Beloved Country during his undergrad years as an English major at the University of Virginia. Grace was able to provide that chance during her rotations after learning about an opportunity through Jeffrey Hall, M.D., assistant professor in the Department of Family and Preventive Medicine. He supervises several of the School of Medicine's global health projects, including the fourth-year student international electives, the Traveler's Health Clinic and a Global Health Fellowship program.

“I had made plans with a classmate through a mission program,” Paul DeMarco says, “but it fell through. Then Grace asked me if I wanted to go. I said I had only been waiting for 30 years.”

DeMarco spent February 2020 in Mbeya, Tanzania working at the Mbeya Zonal Referral Hospital and her father joined her for two weeks during her rotation. She describes the experience as eye-opening.

“I worked mostly in the peds malnutrition unit,” Grace says. “It’s a hospital with minimal resources, and patients often had to choose which lab they could afford to pay for if they needed multiple tests. It really pushed the team to hone their diagnostic skills.”

Her father served as a senior member of the team while in Mbeya.  “It was almost as though I had been transported back 40 or 50 years,” he says. “Open wards and rooms with 30 beds, with no isolation, even for patients with active tuberculosis. It was difficult knowing that if some of these patients had been in the U.S., their chances for accurate diagnosis and treatment would have been improved, sometimes significantly so.”

He is hopeful to return to the hospital someday and credits Hall along with Mark Shafer, M.D., medical director and director of the residency training program in family medicine at the John A Martin Primary Health Care Center in Winnsboro, South Carolina, with establishing a good relationship with the leaders of the hospital.

Grace is looking forward to her residency in medicine and pediatrics. “I love spending time with kids, and I love the fact that there is an opportunity for me to do both, to bridge the gap especially for kids with chronic diseases as they transition into adult care.”

Grace is grateful for the knowledge and experience she has gained from all her family members, especially her grandfather who took on the role of teacher for her. “He has continuously coached me and challenged me to learn more, although we are taught much differently now than when he was in medical school and residency,” she says. “And he’s giving me advice on how to navigate from Arlington to Washington D.C.”

Although a generation apart, Grace and her father relish their experiences at the School of Medicine. Paul DeMarco says his greatest impression will always be the quality of the teaching.

“We had strong clinical mentors like O’Neill Barrett and Dean Humphries,” he says. “Dr. O'Neill's confidence in me as a student is something I have always carried with me.”

Grace recalls the feeling of community. “From the administration, the faculty and the professors, everyone was willing to help,” she says. “That allowed me to make life-long relationships with my classmates. The people are what makes it great.” 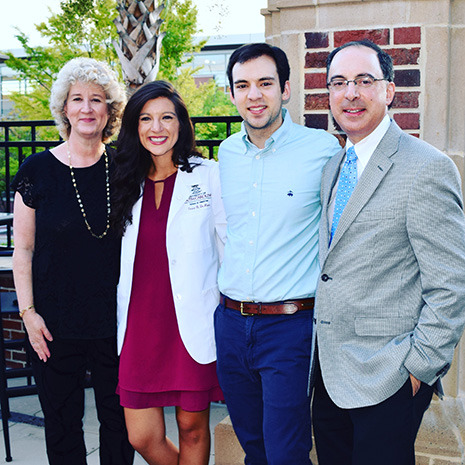 Class of 2020 graduate Grace Demarco, M.D., comes from a healthcare family. Her father Paul DeMarco, M.D., graduated from the School of Medicine in 1989. Her grandfather and brother also are physicians, and her mother is a nurse.