Music from the heart

Edward Middleton spent much of his life focused on helping others as a rehabilitation counselor, but now he is using music to make a difference in his community.

Middleton, who earned his Master’s in Rehabilitation Counseling from the University of South Carolina School of Medicine Columbia in 1999, taught himself to play guitar in the 1990’s.

“Playing was really therapy for me,” he says. “I played for me, my family, and a few friends when we were just sitting around.”

After graduating from the UofSC School of Medicine, Middleton worked with the Lexington Richland Alcohol and Drug Abuse Council and with William Jennings Bryan Dorn VA Medical Center. In 2006, he received the school’s Distinguished Master’s Alumni Award. Last year, when his son was diagnosed with heart failure and had to travel to Arizona for a heart transplant, music played a therapeutic role for both Middleton and his son.

“My son could synthesize music and we realized it was something we could do together,” Middleton says, “So, we started writing a song together called ‘Love is on the Way.’”

Middleton’s son worked on the background music while he was recuperating from surgery and undergoing outpatient therapy. Seeing the role music played in helping his son overcome his health condition spurred Middleton to pursue his music more seriously. He decided to share his music with others by playing impromptu sets in a park near his home in Irmo.

“One day I started playing when there were just a few people around, then closed my eyes and really got into the music,” he says. When he opened his eyes, a crowd had gathered. They gave him a standing ovation when he finished.

Today, Middleton continues to play at the park and even at local coffee houses. He hopes to eventually record his music, including the song he worked on with his son. 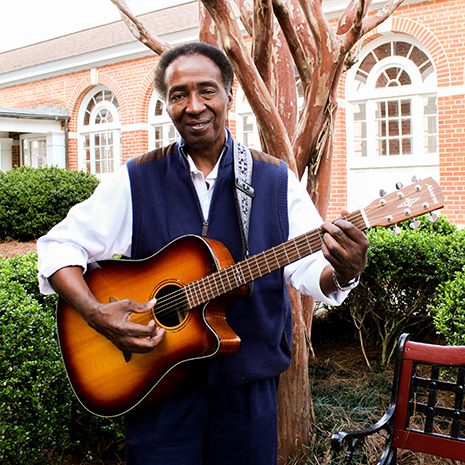 After a successful career as a rehabilitation counselor, Edward Middleton is turning his focus to music.