Nurse anesthetists are critical members of the surgical team, ensuring patients remain pain free and surgical procedures can be performed safely. They not only work in traditional operating rooms, obstetrical delivery rooms, and ambulatory surgical centers, but also in a variety of other settings where anesthesia and pain services are used to treat patients.

The University of South Carolina School of Medicine Columbia’s Nurse Anesthesia Training Program has roots that go back more than five decades, even before the formal creation of the school. The program was established in 1970 at what was then known as Columbia Hospital, and has been producing skilled nurse anesthetists for South Carolina and beyond for 50 years.

In March 2020, colleagues, classmates, faculty, and staff came together for an event to celebrate the program’s milestone anniversary. The special evening gave guests the opportunity to reconnect and reminisce.

Among the guests at the reunion event was Charlotte Roseman, who served as the Columbia Hospital program’s first director, helping the program move through the accreditation process in 1969. Roseman had earned her nursing degree from Mercy Hospital in Charlotte, North Carolina, before her husband’s job brought them to Columbia.

“They had actually offered the position to someone else,” she says, “but he never showed up, so they asked me to become director.”

While there were a few physicians who were not so keen on the idea of nurses handling anesthesia duties, Roseman recalls several who were very supportive of the new program.

"Most physicians saw us as an integral part of the surgical team,” she says.

The program, which was the second nurse anesthesia training program in South Carolina, matriculated its first class in 1970. Roseman remembers that it was not difficult to attract students to the program.

“Most of them were OR nurses, and when they saw how well the program was going, they were ready to go back to school,” she notes.

The program became part of Richland Memorial Hospital in 1972, when the new facility replaced Columbia Hospital. Kristi Williams also spent much of her career in the nurse anesthesia program, first as a student, then eventually returning to serve on two separate occasions as director, as well as, assistant director and faculty member. She helped oversee the transition from the diploma or certificate program to a master’s degree program in 1998, when most nurse anesthesia programs were still under the direction of schools of nursing.

“At the time, only one other nurse anesthesia program was seated through a school of medicine, and that was Baylor University,” Williams says.

Several faculty members from the School of Medicine encouraged the affiliation of the Nurse Anesthesia Program with the medical school, including then Chair of Pharmacology Don Allen and then Assistant Dean for Graduate Studies Jim Buggy. They helped organize Physiology and Pharmacology graduate level courses required for the Nurse Anesthesia Master’s program and integrated the program into UofSC Admissions and course registration systems.

Buggy, Williams, and Nurse Anesthesia alum Richard Wilson also helped to expand the Nurse Anesthesia Program in 2010 to include Greenville Hospital System, now Prisma Health-Upstate, as a second primary clinical training site. The accreditation for the expanded combined program featured live interactive teleconferencing so that students in Columbia and Greenville shared the same didactic courses with class sessions originating in Columbia and others in Greenville.

“We added nurse anesthesia and rehabilitation counseling as graduate offerings in 1994” he says, “That helped build the recognition of the university.”

Buggy eventually relocated to Greenville and served as associate dean for Admissions and Student Affairs at the UofSC School of Medicine Greenville until his retirement in 2016.

“I have the pleasure of having served as a founding member for both University of South Carolina Schools of Medicine,” he says.

Williams credits the success of the program to both the clinical and didactic faculty.

“Many of our faculty who were part of the program have a great deal invested in the program. They wanted to see it succeed and ensure our graduates represent the program well,” she says.

Williams believes the transition from a master’s program to a doctorate program, which is currently underway, reflects the significant role nurse anesthetists play in today’s medical setting.

“The type of services that we provide has become more technical and complicated, requiring more knowledge,” she says.

Current Director Kevin LeBlanc, Ph.D., himself a graduate of the School of Medicine Nurse Anesthesia Training Program, also earned a doctorate in biomedical sciences at the UofSC School of Medicine. LeBlanc, who has served as director since 2016, feels the program is poised for continued growth and success.

“We have a 90 percent first-time pass rate for national boards, which is well above the national first- time pass rate,” he says.

He attributes the pass rate to the combination of expert instruction in both the classroom and clinical areas, and to the unique partnership between the SOM and its clinical partners. The program graduates on average 30 students each year, and about 80 percent of graduates remain in South Carolina to practice.

For Roseman, it is rewarding to see just how far the program has advanced since that first years of just four students in a class.

“I am so very proud of the school. We helped to fill a need when there weren’t enough anesthesiologists,” she says, “and we provided better outcomes for patients by working as a team.” 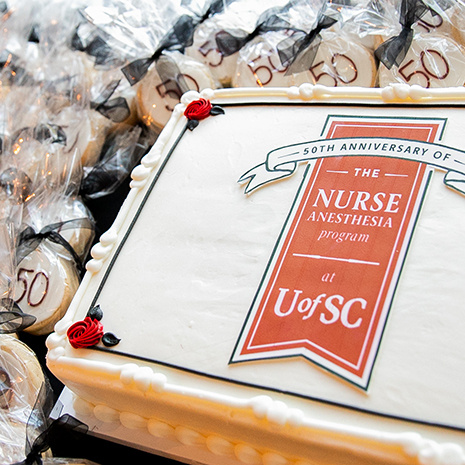 The Nurse Anesthesia Program is celebrating its 50th anniversary in 2020

On March 6, the school hosted a celebration honoring the 50th Anniversary of Nurse Anesthesia at 701 Whaley in Columbia.

See photos from the event.