From NICU to residency

Growing up, Gabbie Rhinehart always thought she would become a veterinarian as she had spent much of her youth on her grandfather’s farm in Wagener, South Carolina. But around the age of 16, she started working in her father’s office at Columbia Heart Clinic.

“I fell in love working with people, both on their good days and their bad days,” she says. “My dad encouraged me to work with the nurses, the nurse practitioners, the secretaries, the clinical assistants, the PAs, the physicians, everyone so that I would understand what was involved with every role. I knew from that point I wanted to go to medical school.”

Gabbie earned her bachelor’s degree in genetics from Clemson University, then returned to her father’s alma mater to attend the University of South Carolina School of Medicine Columbia as a member of the Class of 2020. “I was accepted to other universities, but I wanted to come back here,” she says.

Her father, Rodney Rhinehart, M.D. F.A.C.C., completed his bachelor’s degree in physical education at UofSC. “I always knew that I wanted to teach or coach,” he recalls. Then he made the decision to apply to medical school to become the first physician in his family.

“I remember another medical school told me ‘Mr. Rhinehart, people like you don’t go to medical school,’ meaning because I was from a small town and graduated with a PE major from USC Aiken.  I have laughed about that for years,” he says. “I called the director of admissions at the UofSC School of Medicine every week. Two weeks before school was scheduled to start, he told me that I had a spot if I would just stop calling him."

The admissions director’s gamble paid off. When Rhinehart graduated with his medical degree in 1991, he was ranked 10th in his class.

“I was fortunate to get into medical school,” he says, “because I know not everyone gets that opportunity. And I still get to teach and coach in medicine.”

Gabbie is excited to have matched in internal medicine at the same hospital where her father completed his residency and the hospital where she spent her first days when she was born.

“I was born three months premature,” she says, “My dad was chief resident at the time, and my parents could spend time with me during his breaks.”

Gabbie had a sneaking suspicion that she would follow a path to internal medicine. “I enjoy talking with older folks, gaining wisdom from them,” she says. “I think it is a special gift to have conversations with people on some of the worst days of their life. I believe face-to-face conversation is becoming a lost art with my generation, and I think that is why I am drawn to that.”

Her father agrees that technology has introduced a new way of training today’s physicians. “We had more didactic and textbook training, where students today have more virtual training,” he says. “And I’m not sure that today’s medical students are exposed as much to patient interaction as we had in our day. That is something they will have learn more of during residency.”

For those considering a career in medicine, Gabbie offers some words of wisdom. “In your first year of medical school, you will have to learn to say no to many things you are accustomed to saying yes to, like social events,” she says. “By your third year, you’ll be reminded that you are responsible for people’s lives.”

Gabbie’s father says perseverance and preparation are key to becoming a good doctor. “You have to separate yourself from the rest of the pack. Just because you are accepted does not mean you will be successful,” he cautions. “You have to work hard throughout your entire training.”

Gabbie credits her father’s encouragement with her ability to interact well with her patients. “I had a lot of first-hand experience before I stepped into the hospital,” she says. “Working with my dad for so many summers, learning how to have both good and hard conversations, and adopting things I learned from him along with new skills that I learned in school have helped me connect with people. To watch and learn from him has been a great privilege.”

The only disappointment Gabbie had during her medical school experience was a result of the COVID-19 pandemic. “I’m sad that my father didn’t get to hood me,” she says, “but the opportunity to be able to work alongside doctors who took care of me when I was born 26 years ago at the hospital that saved my life, well that’s just a sweet story.” 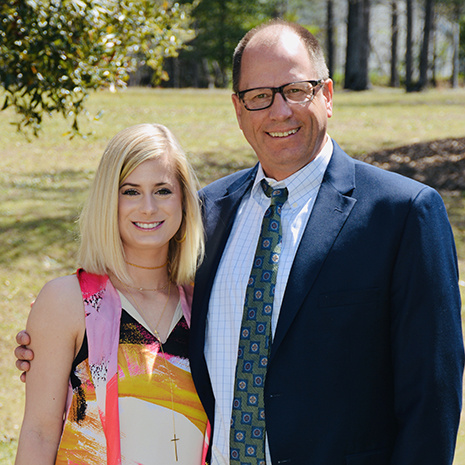 A legacy of care

Gabbie Rhinehart is completing her residency at the same hospital where doctors saved her life when she was born premature 26 years ago.