Embryologist walks the same path as his patients

When most students start down the path toward an advanced degree, they usually have an idea of why they are headed in that direction. For Richard Kordus, however, his journey to earning his Ph.D. in Biomedical Sciences, took a bit more time than he anticipated. And little did he know that he and his wife would become patients in his own field of expertise.

Kordus describes his choice of careers as a ‘fortunate accident.’ After graduating from Valparaiso University in Indiana with bachelor’s degrees in biology and chemistry, Kordus began working as an inorganic chemist, then became interested in embryology, working in the areas of infertility and in vitro fertilization (IVF) An embryologist may facilitate testing, sample retrieval, and laboratory work for assisted reproductive technologies like IVF.

“I began looking for a new career because I wasn’t really being fulfilled,” he says. “A friend working in fertility suggested I consider her field. I didn’t even know being an embryologist was a job. Now I love what I do.”

After spending several years in Wisconsin and New Jersey working in the fertility clinics, Kordus came to Columbia, South Carolina, in 2004 to help establish a fertility clinic with Gail Whitman-Elia, M.D. He then entered the University of South Carolina School of Medicine Columbia and earned his master’s degree in biomedical sciences in 2010.

Kordus had begun work on his Ph.D. in 2006, but stopped in 2010. “It was great that I could still attend class, but it was a difficult challenge to balance a full-time job and grad school, so I decided to focus solely on my master’s.”

Around 2014, Holly LaVoie, Ph.D., professor in the department of cell Biology & anatomy and medical micro-anatomy course director, encouraged Kordus to consider returning to complete his doctoral work, and in 2015, he returned to the School of Medicine with the goal of completing his Ph.D.

As fate would have it, the fertility clinic where he worked was sold in 2016, and he eventually found a new position with Fertility Center of the Carolinas the following year. That enabled him to work on his research in both Greenville and Columbia.

“I knew that if I wanted to advance my career to become a lab director, I would need a Ph.D. to be considered for such a position,” he says.

Kordus credits LaVoie and the research she was conducting in reproductive biology and her background in cell biology with his ability to do significant research for his field of embryology,” he says. “I was able to study so many things that are related my field of invitro fertilization.”

Kordus’ research, most recently published in the Journal of Assisted Reproduction and Genetics, has focused on the granulosa cells of the human follicle as it relates to embryo implantation. Granulosa cells reflect the overall heath the of the oocyte, an immature egg cell, and many studies are being performed to look at biomarkers to predict embryo development and pregnancy potential, helping to reduce the costs associated with IVF.

“Our long-term goal is to create a biomarker panel that will help embryologists select the embryos with the best chance of implantation as quickly as possible to help reduce the cost associated with multiple IVF cycles,” Kordus says.

Little did Kordus know he would have to rely on his training when he and his wife decided to start a family.

“Ironically, my wife and I have experienced infertility,” he says. “and we have been through the process. Due to our specific circumstances, we will have to use a surrogate for a future pregnancy, but I know that everything I have done was also for the benefit of our own embryos.”

Kordus is grateful to the School of Medicine and LaVoie in allowing him the flexibility to continue working full-time and continue his studies. He presented his thesis and graduated this spring with his Ph.D. in Biomedical Sciences.

“Being able to work on my research that directly impacts what I do in my career has been a blessing,” he says. “It’s a rewarding career and I’ve never looked back.” 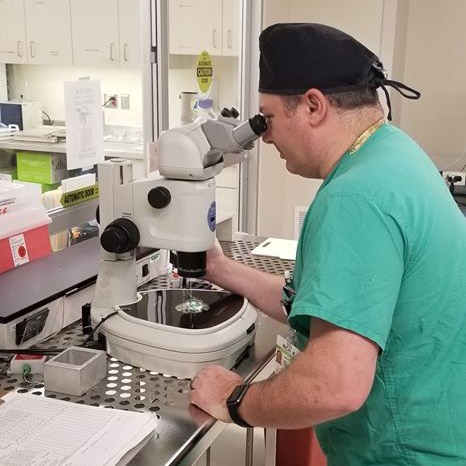 After earning his Ph.D. in biomedical science in May, Richard Kordus is continuing his work as an embryologist and his reasearch on infertility.