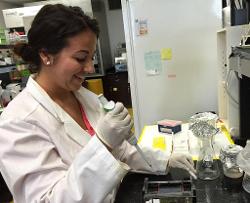 The words summer and vacation go together like peanut butter and jelly for a lot of college students. But in the famously hot months, the University of South Carolina offers meatier sandwiches on its academic menu. This summer, the university’s Center for Colon Cancer Research brought undergraduates from around the country into a new biomedical research experience, one that the organizers hope will help bring more minority students into a discipline where they are under-represented.

For students who participated in the 10-week program, it opened their eyes to what a career in research really entails.

“I really don’t get an opportunity to do research at my school, because it’s so teaching oriented,” says Tinom Shokfai, who is originally from Nigeria and is now a senior at Allen University. “Internships give me that opportunity to get my hands on a real experiment. It gives me a feeling for what real-life research is all about.”

And real-life research, they found, is often about finding success in failure.

“In school, our labs are set up for us to make an experiment successful,” says Ji’Vone Freeman, a junior at Philander Smith College in Arkansas. “What you don’t learn is that in research, 90 percent of the time, your experiments are not going to work. It’s a huge trouble-shooting process and you have to come up with alternatives when something doesn’t work out.”

Helping students understand the paradigm shift between undergraduate and graduate school was a focus of the program. It included professional development seminars covering topics such as technical writing, research ethics and the process of successfully applying to graduate school.

Putting together a program that would provide a full-immersion research experience for minority students took time, as did the beginning of the program itself. The inaugural Summer Undergraduate Minority Research Program had its roots in a grant renewal that the Center for Colon Cancer Research received from the National Institutes of Health a couple of years ago.

Originally organized with a five-year, $11 million Center of Biomedical Research Excellence grant in 2002, the largest single grant the university had garnered at the time, the Center for Colon Cancer Research is as an interdisciplinary biomedical facility focused on laboratory and clinical approaches to understanding and treating colorectal cancer. Although the administrative offices are in the Jones Physical Sciences Center, researchers are located all over campus, from the department of chemistry and biochemistry to the School of Medicine to the South Carolina College of Pharmacy.

The grant was successfully renewed in 2007 and 2013, and in the last go-round, the NIH program officers made a request: They wanted suggestions and a budget line for developing a program to improve minority recruitment into biomedical research.

It is, as South Carolina College of Pharmacy professor Doug Pittman relates, a noticeable deficiency in the field.

“We do have minority student majors as undergraduates, but at the Ph.D. level, there just aren’t very many,” says Pittman, a center researcher who now serves as director of the summer program. “And if you look at faculty in Tier 1 research institutions across the country, it’s nowhere near the percent of the population that it should be.”

Frank Berger, director of the Center for Colon Cancer Research since its inception, put together a committee to determine how to better recruit and retain minority biomedical researchers. Pittman, who was a committee member throughout the inception process, says one early initiative was to travel to nearby undergraduate-focused institutions to recruit students for graduate work at Carolina in center laboratories, but in the process they had an epiphany.

“We realized that if we wanted to do a good job of recruiting minority students into the sciences, we needed to start when they’re undergrads, not when they’re making the transition between undergraduate and graduate school,” he says. “The decision has already been made at that point, so we need to get to them earlier. And the faculty at the places we visited were really excited about the opportunity to put their undergraduate students in high-level research labs.”

Pittman had run a summer undergraduate research program, when he was an assistant professor at the Medical College of Ohio (now the University of Toledo Medical Center), which made him an ideal candidate to put together one at Carolina. Starting a new program from scratch turned out to be a seemingly endless series of daunting challenges, but Carolina has a long history of hosting student researchers over the summer, and there was plenty of institutional know-how and infrastructure already in place.

“Our Office of Undergraduate Research here really deserves a lot of the credit for helping get this going," Pittman says. “Their director, Julie Morris, and Lauren Clark from the Office of the Vice President for Research put a lot of effort into this. I went to them for all of the many questions that came up and I had no idea where to go. They were the hub.”

The finished product, even in its first year, has won some rave reviews from its participants.

“I would highly recommend this program to anyone. It gave us great insight into what to look out for and what to do to prepare for graduate school,” says Marianna Maddalena, a senior at James Madison University in Virginia. “It’s just a great experience.”