Steaming out some of luminol’s wrinkles 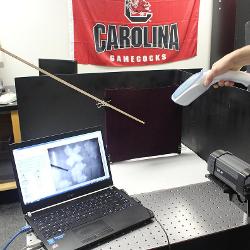 A new visualization technique highlights places where crime scene investigators need to look more carefully. A University of South Carolina research team shows that using a hand steamer with thermal imaging can make even a highly diluted blood sample stand out from its background — much like luminol, but without some of its drawbacks.

Luminol gets trotted out pretty frequently on TV crime shows, but a new technique might someday compete with the storied forensics tool as a police procedural plot device and, perhaps more importantly, as a means of solving real crimes. Recently published work from the University of South Carolina is showing that what the researchers term “steam thermography” has the ability to spot blood spots in all kinds of spots—even in spots where luminol can’t.

University of South Carolina chemistry professors Michael Myrick and Stephen Morgan use a hand steamer in combination with thermal imaging in their new visualization method, which can make even a highly diluted blood sample stand out from its background. Their laboratory work has roots in the technology of “night-vision goggles,” which have been a staple of popular fiction for at least 25 years.

In Silence of the Lambs, for example, Buffalo Bill wore a pair to “see” Clarice Starling in a pitch-black dungeon. In Patriot Games, a splinter IRA terrorist group used them to attack Jack Ryan’s home after dark.

Night-vision goggles contain an infrared sensor that can differentiate between areas from which large and small amounts of IR radiation, commonly referred to as heat radiation, are emanating. They sense heat contrast, in other words. The device converts the data into a visible image distinguishing between warm and cool areas—perfect for making a hot-blooded creature stand out from the background.

Myrick, Morgan and their students have been carrying that idea further, working to develop IR-sensitive cameras into instruments that highlight a lot more than the difference between warm and cold. The light radiation that any object gives off is a function of the molecules that make it up, so the research team has been refining the ability of IR-sensitive cameras to recognize chemical contrast; that is, “see” the difference between chemically distinct objects that are otherwise indistinguishable in an image.

Courtroom exhibit A in that effort is blood. Using grant money from the National Institute of Justice (the research funding arm of the Department of Justice), the researchers have been developing a system to make blood spot stand out from the background in a thermal image.

In the course of trying different approaches to enhance contrast, they found one that was really eye-popping. By first spraying blood-spattered fabric with a hand steamer, the team showed that droplets of even 1/1000-diluted blood would stand out brightly in thermal imaging under the right conditions. And the contrast enhancement is evident in real time—an observer can watch blood spots emerge on the IR camera’s viewscreen as steam is applied. The researchers recently published their results in the journal Analyst.

The team has worked with trained forensic scientists, who verified that highly diluted bloodstains that their “steam  thermography” technique reveal are not visible with standard light visualization techniques.

That would make this one of the few techniques to really give luminol a run for its money. Luminol is not used as extensively in crime labs as its portrayal in movies and on TV might imply. The technique requires a solution of luminol and another reagent to be sprayed on the surface of interest, which effectively contaminates a crime scene.

As a consequence, using luminol is often a last resort, when other methods fail to highlight where blood is present—when someone tried to clean it up, for example, and not much is left. With demonstrated success at 1/1000 dilution, steam thermography is a promising alternative.

What’s more, you need a darkened room to see the faint, distinctive blue glow that is generated for a short time when the luminol solution has come in contact with blood. That precludes its use outside. Steam thermography doesn’t have that limitation.

Myrick and Morgan’s method does introduce a brief steam exposure to a crime scene, but they show that adding an already ubiquitous chemical (water) that quickly evaporates doesn’t warm the surface much (less than 20 degrees Fahrenheit), and they verified that DNA testing of blood spots wasn’t affected.

Moreover, they’ve also established that their new technique isn’t fooled by common materials that can cause false positives with luminol, which include bleach, rust and coffee stains.

That makes steam thermography a good candidate for filling some niches where luminol doesn’t fit—and perhaps even some where it does but investigators would prefer a tool that doesn’t contaminate the crime scene.