Probing the depths with robotics 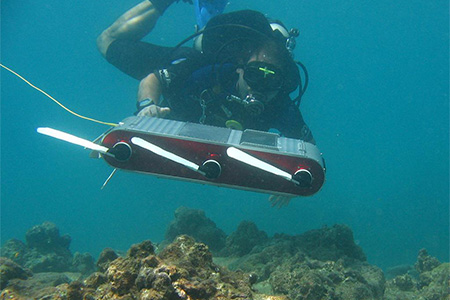 Assistant professor Ioannis Rekleitis is leading an effort to gather oceanographic data with robotic probes.See what's been happening on and around campus this week.

It’s not the only frontier he’s intent on exploring, but the watery one that covers 70 percent of the globe has long transfixed Ioannis Rekleitis, an assistant professor in the department of computer science and engineering.

A robotics expert, Rekleitis is helping shine new light on the oceans’ murky depths by developing better self-reliant robotic probes. He and his research team are using a new National Science Foundation grant to get their feet wet sampling data in and above coastal waters.

They’re taking a three-level approach, using drones in the air, floating vessels on the water’s surface and underwater devices to chart the depths. Central to their effort is developing strategies to make teams of robots work together efficiently to cover three-dimensional space, while also marking data with the added dimension of time.

The ultimate goal is to develop data-gathering strategies that robots can use independently at greater and greater depths, where human intervention becomes more and more difficult.

“It’s a long way down,” Rekleitis says. “Human divers can go to 120 feet or so, maybe 300 feet with special training, but the ocean floor is 11 kilometers (nearly 7 miles) below the surface in places.”

Working with robots sent to remote environments is old hat now for Rekleitis, who worked for three years at the Canadian Space Agency as a postdoctoral fellow. There are many parallels between operating in oceans and in space, he says, and his research will help push the boundaries of knowledge in both places.

But for now, Rekleitis’ focus is on the oceans he began exploring as a child growing up in his native Greece. Given a spear-gun for fishing when he was 7 years old, he took up snorkeling and eventually became a certified scuba diver.

A career in computer science might sound like a life spent in front of a computer screen, but it doesn’t have to be. As a faculty member in the University of South Carolina’s College of Engineering and Computing, Rekleitis has found a profession that makes a lifelong passion part of every workday.