Microevolutionary evidence: The eyes have it 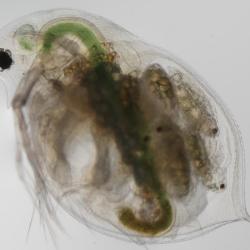 A team led by biology professor Jeff Dudycha recently published a paper showing that larger eye size is the source of a sizable reproductive advantage for a tiny freshwater crustacean. The research provides hard data for eye microevolution that, until now, were lacking.

For a beholder who is an evolutionary biologist, the eye is has long been a fascinating puzzle because of the many parts that must seamlessly work together for the whole to work properly. Biologists have addressed the question of ocular evolution with comparisons between different species, or macroevolutionary studies, and shown how the evolutionary process can be broken down into discrete steps through which a simple light-sensitive cell can evolve into a complex, multicomponent eye through adaptation.

In contrast, hard data for how the process might work within individual species — a microevolutionary approach to the eye’s evolution, that is — have only just arrived. A research team led by biology professor Jeff Dudycha recently published a paper in the Journal of Evolutionary Biology showing that larger eye size lends a sizable reproductive advantage to individuals of a particular species.

“What also turned out to be interesting is that we were also able to measure the effect of variation in body size, and it turns out that the effect of eye size was greater than the effect of body size,” Dudycha says. “Within ecology and evolution, everybody understands that body size is related to reproductive output. Larger individuals can produce more offspring, and that’s true over a wide variety of organisms. So here was something that everybody knew and understood affected reproductive success, and we have data that said that eye size, which nobody had looked at anywhere as far as we can tell, had a bigger effect.”

The focus of the research team was a tiny freshwater crustacean, Daphnia obtusa Kurz. Just 1 to 2 millimeters long, Daphnia would be hard to spot except for one distinguishing feature: its black eye, which is large for its body size.

“A big eye is costly to maintain, because any kind of neurological tissue, including retinal tissue, is energetically demanding relative to other kinds of tissue,” Dudycha says. “And we also know there are organisms, like blind cave fish, that once had eyes and have moved into environments without any light at all, and they lose their eyes, which wouldn’t happen unless there was a cost to having an eye. So if there is a cost to keep having eyes, there needs to be some kind of benefit, and we were wondering if we could measure that benefit.”

The team, which included graduate student Chris Brandon and summer undergraduate researcher Tiesha James, did that by collecting more than 200 female Daphnia individuals from a pond in South Carolina’s Congaree National Park and determining both eye diameter and clutch size, or the number of eggs each carried.

The correlation was clear: An increase in eye diameter of 20 micrometers, which is about one standard deviation of the mean diameter, translated into about one more egg beyond the average of about six.

They went further by doing laboratory work with collected specimens to ensure that the variation of eye size in the wild wasn’t a result of other factors, such as differing light or nutrient availability among juveniles. Their results demonstrated that genetic variation is a substantial driver of differences in eye size and reproduction.

The study provides a quantitative foundation for eye microevolution where it had been lacking, Dudycha says.

“The macroevolutionary approach shows differences in eyes that are much larger, that are big jumps compared to what we looked at,” he says. “We were looking at the question, ‘Are there tiny little steps that connect the big jumps?’ And what we found was, there were.”

The primary research article in the Journal of Evolutionary Biology can be found online. Tiesha James' undergraduate research was supported through the University of South Carolina-Morris College Summer Mentoring Program.