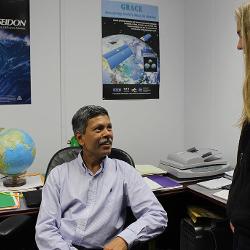 Professor Subrahmanyam Bulusu is part of an international team collecting hydrographic data in pirate-infested waters to better understand the northern Arabian Sea circulation. Key to the effort, and an essential element of the team’s variant of a widely recognized acronym, NASCar, is autonomous research.

Oceanographer Subrahmanyam Bulusu would like to help make life a little easier for hundreds of millions of people, but pirates keep lousing things up. These are not nonthreatening buccaneers of cartoons or cinema, but rather the serious and potentially deadly criminals that still sail the modern seas.

“The Somali region has many pirates, and they are stopping research vessels and robbing them,” says Bulusu, a professor in the University of South Carolina's School of Earth, Ocean and Environment. “They are taking scientific instruments, and they do not even know what these instruments are.”

Bulusu is part of an international team of researchers that needs those instruments to collect data in the northern Arabian Sea. Oceanographic information, such as temperature, salinity and current speed, is a necessary component of any method for reliably predicting the cyclic rainfall patterns that hold sway over the livelihoods of the many people inhabiting that part of the world.

In India’s summer monsoon season, winds from the southwest drive copious amounts of moisture from the Arabian Sea onto the subcontinent. The nation of nearly 1.3 billion count on it every year.

“About 80 percent of the Indian economy depends on the monsoon, and if it doesn’t trigger or if it ends early, it’s what we call a break monsoon,” Bulusu says. “If that happens, then everyone has a reason to worry.”

Bulusu’s expertise is in combining the sparse hydrographic data available with computer models and satellite data to provide as accurate a map as possible of how the waters change over time. The map, always evolving in real time, is a critical input for any prediction process that involves the oceans, whether it’s forecasting the track of a hurricane over the next six hours, the monsoon rainfall expected in the coming six weeks, or the change in surface salinity of the oceans in coming decades.

Without good measurements of actual ocean conditions, the models are limited. Fortunately for the scientists focused on the north Arabian Sea, they have an ally in the Office of Naval Research.

“Last year, the Navy started a project on autonomous data,” Bulusu says. “It is called Northern Arabian Sea Circulation — autonomous research, or NASCar. They are providing funding to researchers to deploy gliders, which can be released from ships or aircraft and will glide on the surface of the ocean, collecting data and transmitting it back to the U.S. via satellite.”

The Navy has a practical interest in understanding the waters in that area, which are contiguous with the Red Sea and the Persian Gulf. Anti-submarine warfare relies in part on accurate water temperature and density information, Bulusu says. The information from the new pirate-elusive gliders will augment another form of autonomous research data, satellite information that his team has been analyzing for years now, and combined with computer models to generate the most accurate evolving map of the region’s oceans ever developed.

Accurate ocean models are important for efforts like search and rescue, Bulusu says, "such as recent uses in tracking potential wreckage from Malaysian Airlines flight 370 and in safely disposing of the cruise ship Costa Concordia after it ran aground off the coast of Italy."

And then there is the matter of planning for an integral contributor to one of the world’s largest economies: that of India, driven by the monsoon.

Bulusu's team recently published a paper in Geophysical Research Letters that shows changes in the surface salinity of the world's oceans over the past 50 years, showing the drift of subtropical gyres over the decades. Some of the work of Bulusu's research group using satellite data was featured in an earlier story.