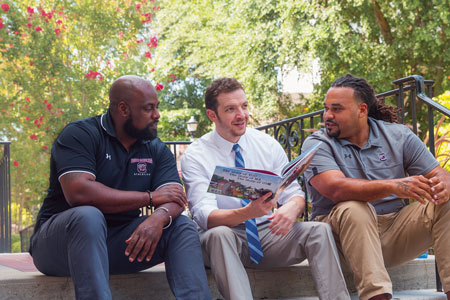 To that end, Moore and Thorne, teamed up with fellow alumnus Kev Roche, a freelance illustrator, to hatch the Gamecock-themed children’s book “#JustaChicken.”

“It’s based on an old parable that I had heard over and over, and we adapted it to the Gamecock culture,” says Thorne, a former team co-captain who’s now a teacher and coach at Blythewood High School near Columbia. “We put the message on the back of the book: ‘This is the story of you; the story of me; the story of USC.’ ”

The two authors drew on some of their personal experiences to create the story and the message.

“To me the story is somewhat synonymous with our experience in the football program,” says Moore, who after graduation spent seven years in the NFL and is now the sideline reporter for Gamecock football radio. He’s also co-creator of EAT2WIN, a camp devoted to eliminating childhood obesity by promoting healthy eating and physical fitness.

“We had those seasons where we were a combined 1 and 21, but then it changed,” he says. “I remember sitting in the locker room thinking ‘What do those other teams have that we don’t have?’ We were searching for something and then we found a way to do it, and the program got better.”

“We would love for all of the kids in South Carolina to read the book and identify with it,” Thorne said. “We want moms and dads reading with their kids. We want kids to spend more time with books in their hands instead of ‘screen’ time.”

“Education is important to us,” Moore said. “We talk a lot about that in camps. If we can use our popularity as football players to talk about education, we’re all for it.”

Roche is a freelance illustrator and graphic designer who works with ESPN on baseball-related broadcasts. He jumped at the chance to work on a children’s book involving the Gamecocks.

“I always wanted to do a children’s book,” Roche said. “I think it’s a good story with a good message about how everyone can play an important role.”

The book is being marketed through Mascot Books and can be found on Amazon.com. While “#JustaChicken” has characters representing most of the Southeastern Conference mascots, there’s still room for a sequel, Thorne and Moore say.

“We definitely have a couple of ideas for where we could take the story,” Thorne added. “We can relate the stories we’ve been told in the past, but in a way kids can better understand.”