When conservation met tourism in the Serengeti 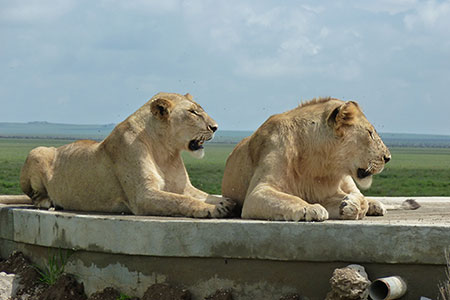 Wildlife can come in close proximity to tourists in Serengeti National Park, as shown in this photograph of a cistern serving the main lodge.

Picture, if you will, what “wildlife conservation” looks like. Do any human beings appear in your mind’s eye? Probably not, or at least not many — with almost no chance that a gaggle of tourists might intrude on the scene you conjure up.

But as University of South Carolina history professor Tom Lekan knows, from the close study of an era and sensibility that anyone passingly familiar with Marlin Perkins and Mutual of Omaha’s Wild Kingdom would recognize, tourism and conservation have a long history of mutual influence. One might say the two have co-evolved, a symbiotic pairing of organisms having a predator (tourism) versus prey (conservation) relationship, inasmuch as conventional tourism is typically viewed as potentially lethal to wildlife.

The predator-prey relationship flourishes in nature; in the animal kingdom, it’s literally the way of life. But the human constructs of tourism and conservation are products of very human circumstances, and Lekan is currently working on a book that examines those circumstances in the decades just after World War II ended. That was the start of a fertile period of growth in global conservation, particularly in post-colonial Africa.

It was a growth spurt that was in part predicated on the economic promise of tourism, and Lekan chronicles the choices made by people with changing notions of how global conservation might be achieved and with early ideas of how tourism could be implemented sustainably to support wildlife conservation.

The modern-day consequences of those conservation efforts include two internationally renowned national reserves in Tanzania, but, as Lekan relates the story, they came at a cost, particularly to indigenous people.

The subject of Lekan’s research is the Serengeti, East Africa’s crown jewel of large-animal diversity and abundance. In the post-WWII years in Africa, even as nations were achieving independence, they were also being subjected to a new external influence.

“Africa was on the brink of decolonization at a time when the Cold War was very hot,” Lekan says. “All of these countries in sub-Saharan Africa were kind of a testing zone between the Soviet Union and the western bloc. It was seen as an ideological proving ground.”

For people concerned with wildlife, biological diversity and preservation of the natural world, Africa’s natural bounty looked to be threatened. A prominent global conservationist of that era, Bernhard Grzimek, the director of the Frankfurt Zoo, saw potential disaster in the offing.

“People were talking about African wildlife going the way of the American buffalo,” Lekan says. “Grzimek felt that Africa was on the brink of modernization, and that its wildlife would soon be destroyed.” 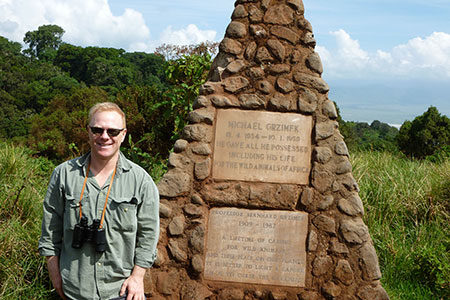 Bernhard Grzimek’s son Michael died in a plane crash during the filming of "Serengeti Shall Not Die." His gravestone, which also holds Bernhard’s remains, now looks out over the Ngorongoro Crater.

Lekan originally thought that Grzimek would make an interesting chapter of his book, but the German eventually moved up in billing and essentially became the main character in the manuscript he is completing, which is tentatively titled "Saving the Serengeti: Tourism, the Cold War, and the Paradox of European Conservation in Postcolonial Africa, 1950-1985."

Although largely unknown in the United States, Grzimek was probably as popular, or more so, in Europe as Marlin Perkins of the syndicated "Wild Kingdom" TV series (1963-1985) was in America. Grzimek was, like Perkins, a TV star of a show that showcased animals in their natural environment, and he got started even earlier in popular media, directing the Oscar-winning 1959 documentary "Serengeti Shall Not Die."

Grzimek was a key player in the Serengeti in the 1950s and 1960s, exerting a strong influence on decisions that led to the formation of conservation areas in Tanzania. One of those decisions involved the indigenous Maasai, a cattle-herding people who rarely hunted and had lived in the Serengeti for generations. They were ejected from land that is now within the Serengeti National Park and relocated to what is now the Ngorongoro Conservation Area.

It was a decision that remains controversial, and not only because an aboriginal people was evicted from their homeland. Some modern ecologists argue that the Maasai are an integral part of the Serengeti ecosystem’s evolution, making anthropogenic contributions — for example, burning brushland and grazing cattle — that helped shape the ecosystem into what conservationists and tourists cherish today.

“These rangeland ecologists think that it was a misguided path to create this ‘fortress park,’ a place that nobody, except tourists, could use,” Lekan says. “It was a particular vision of Africa as an Eden, a people-less Eden, that really shaped outcomes for people who lived there.”

And there was much more than that vision that contributed to the mix of ideas and ideals underpinning the formation of eco-tourist-friendly conservation areas, Lekan adds. Hunting preserves, a place where indigenous people were usually evicted and where mostly rich, white hunters would pay top dollar for hunting privileges, were a common part of the pre-1950s colonial landscape. They were, in fact, an early attempt at conservation. 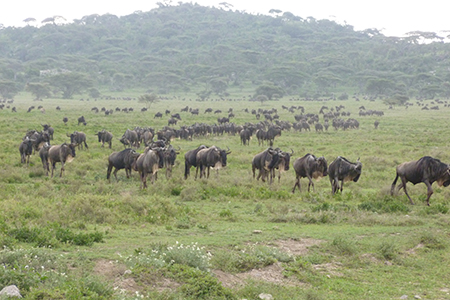 Wildebeest migration is one of the Serengeti's main eco-tourism draws.

“It was the idea that you could save wildlife by consuming it,” Lekan says. “It was very important at the time, but these colonial game preserves were often hated. They had alienated people from their land.”

It was in this context that Grzimek, a citizen of a country that had once been a colonial overlord, helped convince post-colonial leaders of the value of their ecological resources, and to transition to a form of tourism that consumed visually, rather than viscerally.

“Grzimek, along with a lot of other conservationists, were trying to advocate for these newly independent countries to create national parks to protect wildlife,” Lekan says. “And the carrot, for them, was tourism.”

In part because of overly optimistic visions of tourism revenues (the Disney park empire was probably at the height of its growth during the conservation areas’ formative years), the parks were established. And the Maasai were relocated, creating a problem that persists to this day.

“There were unintended consequences of what was a well-intended effort to create a national park and move to this other form of tourism,” Lekan says. “A Maasai delegate to an international conservation summit in Bangkok told a shocked audience in 2004, ‘Now you have made us made us enemies of conservation.’ ”

For Lekan, it’s a history that bears understanding today, as the human population grows and a collective interest in protecting the natural world grows with it.

“There’s a lot of debate now about eco-tourism, and there’s a lot of hope that tourism can still serve a role in protecting wildlife,” Lekan says. “There is more of an awareness of the Serengeti case, where it was fought very top down, and where we have this legacy of some resentment about the loss of land. And so there are a lot more attempts at what they call community conservation now.

“And really, I think, the origins of that come out of this postwar moment around decolonization. The idea of a sensitive nature tourism is older than we might think. They didn’t call it eco-tourism, but a lot of the rhetoric sounds very similar. They didn’t call it sustainable development, but that’s what it was.”