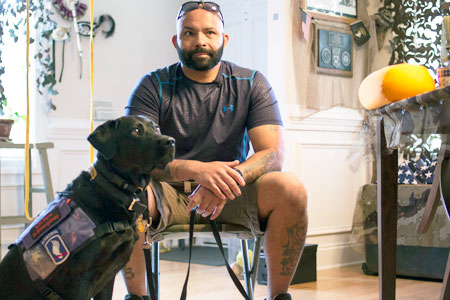 Army veteran Will Roberts says his service dog RC saved his life after he came home and was diagnosed with PTSD.

Fred is the ideal companion. He’s always eager to help out. He’s entertaining and he’s great with people.

“A Helping Paw, ” a short film directed and edited by University of South Carolina media arts student Faith Cox tells the story of Fred and his human partner Becky Sullivan. The documentary is the inaugural winner of the Walt Hanclosky Social Issue Production Award for Media Arts in the School of Visual Art and Design.

Produced nearly a year ago, the eight-minute documentary follows Sullivan and Will Roberts and their service dogs in a series of vignettes. “Each story provides the viewer an insider’s look at these incredible animals and how they impact the lives of those around them,” says Cox, who’s been interested in filmmaking since elementary school when she got a plastic purple camera as a present.

Sullivan, who suffers from Multiple Sclerosis, a debilitating neurological disease, relies on Fred to help her with mobility and helps out around the house. “He picks things up for me and helps with laundry,” says Sullivan in the film. “He does lots of the things that most people take for granted."

Palmetto Animal Assisted Life Services is the Columbia-based organization that trains animals to assist people with varying abilities to live more independent and enriched lives by providing them with assistance dogs. PAALS matched Fred with Sullivan.

And PAALS takes extra care matching the right human with the right dog. “Fred’s personality is so well matched with mine,” explains Sullivan. “He’s a goof. He’s constantly is coming up with ways to make me laugh.”

PAALS trainers teach dogs to turn lights on and off, tug open doors, pick up dropped items and alert for help to assist individuals in wheelchairs. And some are trained to assist children with autism and individuals with Post Traumatic Stress Disorder.

MS sufferers often experience severe fatigue and depression. “Before Fred, it was hard to find the extra energy to try and fight,” says Sullivan, “and now that I have him, it’s given me the courage to start fighting again.” Putting her wheelchair in the garage is just one sign of the progress Becky has made since the yellow Labrador retriever became part of her family. “That’s where I’d like it to stay,” she says.

In addition to Cox, fellow media students Andrew Zah, sound recorder and camera operators Kennen Banks and Christian Harper produced “A Helping Paw.” The film has been shown at several festivals since its completion, including the Orlando Film Festival, the Richmond International Film Festival and the Big Mini Media Festival in Brooklyn, New York.

“We don’t tend to think of animals as useful to human health and well being; Faith was really able to focus on this, and also tell a story about the human condition,” says UofSC media professor and documentarian Laura Kissel. “She also did a terrific job connecting to the people who appear in ‘A Helping Paw.’ ”

For her work, Cox received the first Walt Hanclosky Award and a cash prize of $1,000 to support the film’s production. The award is named in honor of Hanclosky, a distinguished emeritus professor, and is supported by the Hootie and Blowfish Foundation.

The film was a growing and learning experience for Cox in many ways – especially when the team met RC and her human companion, Will Roberts. “We weren’t prepared to hear their story,” Cox says.

Roberts thought he was OK. He wasn’t looking for help or even a dog. But soon after coming home, he realized all wasn’t well, especially when he became frustrated or anxious.

“RC just knows when he’s uncomfortable. She’s extremely perceptive about how he’s feeling and how to comfort him in those situations. I’ve never witnessed a bond this close between a man and a dog,” says Cox.

Now Roberts can’t imagine life without his service dog. “She works very hard for me every day. It’s awesome how she just knows,” he says, adding that he feels like RC saved his life. “If I didn’t have her, you would be talking about me and not with me,” he says in the documentary.

Watch the documentary "A Helping Paw" on Faith Cox's website.