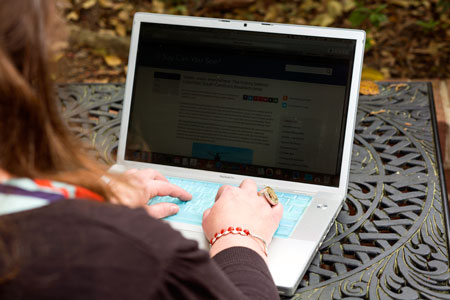 “If you are going to be a public intellectual, you’re going to have to engage with the public." — Public history professor and blogger Allson Marsh

For researchers, little else is more gratifying than studying something that helps someone else — whether it’s finding a sustainable healthy diet, a better way to motivate workers  or a way to make coursework more engaging.

For some professors and researchers at the University of South Carolina that means taking their scholarly work out of the journals and into the blogosphere, where they can reach not just others in their profession, but those who might learn from their work.

“Scholars are turning more to accessible media to get their scholarship to a broader audience,” says public history professor Allison Marsh, who writes a blog for her former employer, the Smithsonian Institution. “All the scholarship is rewarded when a reader wants to follow up.”

For Marsh, that moment came on her most recent blog about the Columbia Canal following October’s catastrophic flooding across the state. A civil engineering professor at the university called her to talk about possible changes in the introductory civil engineering course he teaches to include local public works projects.

“As historians, we want to be relevant to current events,” Marsh says, adding that her canal blog used architectural  renderings that she knew the Smithsonian had in its collection.

“The archival staff helped with quick turnaround time,” she says. “I wrote a draft and revised it on an airplane. It was  the first time I ever paid for Internet access on an airplane.”

Staying current is also important for law school professor Colin Miller. For the past year, Miller has participated in the “Undisclosed” podcast re-examining evidence in the murder trials of Adnan Syed, whose fate has been chronicled by the national podcast “Serial.” The podcast looks at evidence that has been explored by the national podcast produced in the style of “This American Life” as well as looking at new evidence the “Undisclosed” team has uncovered. He also writes for Evidence Prof Blog.

“Part of my goal is to educate the public,” he says. “Another part is to keep a toe dipped into what’s going on in the actual trenches and another part is to discover ideas for my scholarship or for use in the classroom.”

To that end, the blog helps Miller stay up to date on the latest cases and rules of evidence.

“I am always trying to find what’s going on so I can keep current in my scholarship and teaching,” he says. “The worst thing you can have is a classroom where you’re citing cases from 1903, and the students’ eyes are rolling back in their heads.

“It’s better if I can come into the classroom and say ‘Here’s a case involving Uber or here’s one involving Twitter.’ ”

Another feature of the blog for Miller is the idea of educating the masses, of translating his scholarship into understandable bits for potential jury members.

“The entire foundation of the American justice system is an educated jury,” Miller says. “But a lot of people don’t get that justice education. I love the fact that somebody who might  not know about the rules of evidence can hop on my blog  and learning something.”

That translation from academia to the real world is essential for business professor and human resources expert Patrick Wright at the Darla Moore School of Business. His twice-a-month blog for the HR Policy Association is nothing like his scholarly output.

“Blogging is for practitioners who don’t speak academic jargon,” Wright says. “I am writing much more for general understanding. How can I provide data and knowledge to  the practitioner? How can practitioners see the value in  academic research?

“When you are in a business school, it is absolutely critical, being able to translate from academia to the real world.”

The bonus is that readers — mostly human resource officers  at major corporations — get to see quality research coming out of the university and the Moore School.

“The practice community is becoming more evidence-based now, there is more of a thirst for that information,” he says. And that can lead to new research projects.

Finding those moments of value to the university and the world of research are important if blogging is to be taken  seriously inside academia, public historian Marsh says.

“Not everyone thinks it’s scholarship,” she says. “They wonder ‘How can you put anything intellectual into something so breezy?’

“There is a misconception that blogs are just your thoughts, that they’re not scholarly. But my most recent blog had to go through a review committee just like any other scholarly publication.”

And, unlike scholarly publications, blog feedback is immediate and can sting.

“If you are going to be a public intellectual, you’re going to have to engage with the public,” Marsh says. “But, the public talks back. That is why No. 1, your scholarship has to be in place.”