Student documentary gives viewers something to chew on 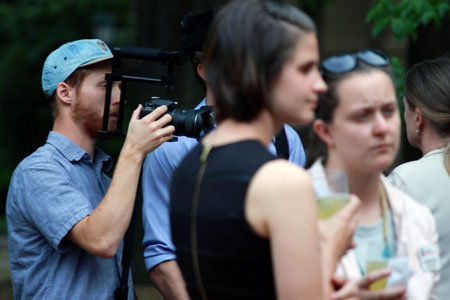 Real food, as in fair, local, humane and ecologically sound, was something that Ryan Gaucher says his group had “moderate interest” in before filming its documentary, “Something to Chew On.” But Gaucher and classmates Cole Haltom, Coleman Krietemeyer and Colin Rex were able to use a class assignment to better understand and improve their community.

After completing the capstone project for Laura Kissel’s media arts class in documentary production, the team graduated from the University of South Carolina and set off on their careers, looking for work in videography and commercials and as production assistants. Haltom is working in Japan, while Rex is in Argentina.

But they say the project helped them grow in more ways than just as filmmakers. And that, Kissel says, is the whole idea.

“It’s important to me that young people think critically about our society,” Kissel says. “We are citizens in a democracy, which means all of us have to participate and work together to build a more just and fair society. Doing documentary work is a way to express curiosity about the world, suggest solutions to problems and build community.”

She asked her class to create a documentary about a social issue that affects the residents of Columbia.

The filmmakers’ original plan was to make to make a film about Camon Sushi.

“We were kind of going down the road of food as an art,” says Gaucher.

However, they had some friends in Real Food Challenge — a student organization that works closely with University Dining to incorporate more organic, locally sourced and fair trade food on campus. After getting more information about what sustainable or real food was, they decided to create their documentary based on real food systems implemented on and off campus.

It took the group a month to film and another week and a half to put the documentary together. Gaucher says it required some long work days.

“We shot it fairly quickly. There was a week where we had a different interview pretty much every day,” he says. “The last week or so was the editing process, with a lot of long, long work days where we’re working almost every day. And the last few days, we were up till 6 in the morning.”

“Something to Chew On” brought a new challenge to these filmmakers as the longest documentary they’ve ever created. But the group also went a step beyond and created a website to give viewers a platform to find ways to get involved.

“We wanted a place where we had all these resources that allow people to take the next step,” says Gaucher. “It’s just one thing to talk about it in a film, but it’s another thing to think, ‘How do I act on it?’ "

After the documentary and website, the filmmakers gained a new perspective on sustainable food and its effect on the local community.

“We all learned so much about the different aspects of real food and local food while making the film. We really saw how you can make a difference on a small scale. That’s was kind of our goal of the film to show small things that you can do as an individual,” says Gaucher.

Visit the students' website to watch the documentary and learn more about sustainable food options in Columbia.