The buzz on cicada killers 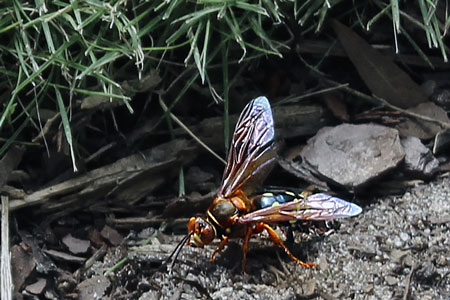 The cicada killer wasp is abundant this time of year, taking advantage of the abundance of cicadas. The wasps do exactly what their name says and use paralyzed cicadas to feed their young.

You might have noticed some large wasps in your yard or on campus this summer. These wasps are known as cicada killers, identified by their size and their black abdomens with three yellow spots on either side, rather than stripes across the back.

These insects do exactly what their name says — kill cicadas, a larger insect that has eyes set wide apart, thin wings and a unique song. The wasps are focused on the cicadas, leaving little threat to humans and other animals.

We caught up with Rudy Mancke, naturalist-in-residence at the University of South Carolina, to learn more about the cicada killer wasps buzzing around the university’s Horseshoe.

What is the difference between the cicada killer wasps and regular wasps?’

“The cicada killer is not a social insect, meaning it does not instinctively protect a nest. Social wasps are typically aggressive because they are guarding their colony and nest. The cicada killer is a solitary wasp, which means these insects act as predators and hunt their prey, like the cicada. Solitary wasps often build smaller nests that can be hidden and abandon these nests after they lay their eggs.”

How does the cicada killer wasp fit into nature?

“The cicada killer wasp act as one of nature’s ways to control the cicada population. When the cicadas start to emerge during the summer and early fall, they surface in large numbers. The cicada killers will paralyze the cicadas to use as food for their young by taking them into their tunnels for seven to 10 days until their eggs can eat them.”

What’s the difference between female and male cicada killer wasps?

Are cicada killers dangerous to humans?

“The female cicada killer does have a large stinger, but it is not as dangerous as social wasps. Typically these insects choose not to bother humans and other animals as long as they are not being harmed.”

What are common areas where cicada killers can be found?

“Cicada killers can be found near areas with an abundance of cicadas. Cicadas usually choose to lay their eggs in trees or branches, so the cicada killers stay close by. The cicada killer wasps prefer to build their tunnels in open spaces with soft soil that is easy to dig in, such as edges of grass, mulch or sidewalk. These tunnels can be identified by piles of dirt that the cicada killers have displaced to dig underneath the surface.”