After the flood: Stopping tomorrow's floods

South Carolina’s 1,000-year rainfall event and catastrophic flooding in October 2015 caused several deaths, scores of dam breaches, extensive property damage, drinking water contamination and agricultural loss. Immediately after the catastrophe, the Office of the Vice President for Research created internal funding opportunities to support relevant faculty research. Thirty-four projects, led by more than 80 faculty researchers, were funded and reports from each project will be presented this October at the S.C. Floods Conference. Here is the first of six stories from a cross-section of the projects. 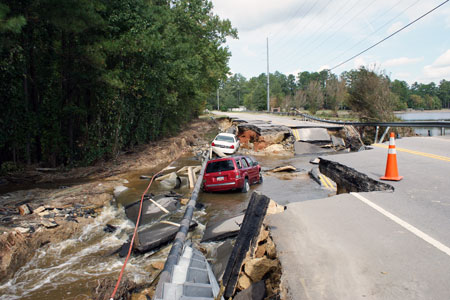 Destruction from the flooding was exacerbated by numerous dam and levee breaches in Lexington and Richland counties.

Hanif Chaudhry, a civil engineering professor and associate dean of the College of Engineering and Computing, is leading a team of researchers who aim to learn as much as they can from the dams that failed. The researchers didn’t have a moment to spare once the rain stopped falling.

“It was very time-sensitive,” Chaudhry says. “When there is a failure, if they want to rebuild, they will start right away with construction. Or if the dam is gone, the flow of water will change the characteristics of the site. Or if some of the structure is left, it might present a hazard that the owner will move in quickly to remove.”

Fortunately, Chaudhry and his engineering colleagues were already in the midst of two similar studies of dam breaches, including a $3 million project funded by the National Science Foundation. They had the manpower, training and laboratory equipment to quickly collect and analyze field samples.

As part of the S.C. Floods initiative funded by the university’s Office of the Vice President for Research, Chaudhry’s team visited 14 sites with major damage to earthen levees, nine of which involved total failures. Data collection included geometric measurements and samples of the materials present in the remnants of the structures.

The full analysis is still in progress, but the consequence of overwhelming the capacity of a dam’s spillway to move excessive inflow to the downstream side of the embankment was clear. The result, Chaudhry says, was “overtopping. That’s why most of the dams failed.”

He hopes that a complete analysis of the dam materials and the failure conditions might lead to design recommendations that will mitigate damage in future flooding events. Moreover, hydrological modeling of levee capacities at the point of failure should provide leaders with the capacity to better manage dams and levees that are highly connected.

“Some of these dams were in series,” Chaudhry says. “So even if a given dam is in good shape, if an upper dam fails, it comes down as a major wave, and if that cannot be handled it overtops, and then the next one. So it can become a cascade. The dams are a system that we need to properly manage.”