If you’re paying $700 for a meal, it had better be special. An experimental gastronomy event coming up at the Montalvo Arts Center in California promises to be just that — and University of South Carolina art professor Virginia Scotchie is helping to make it so. 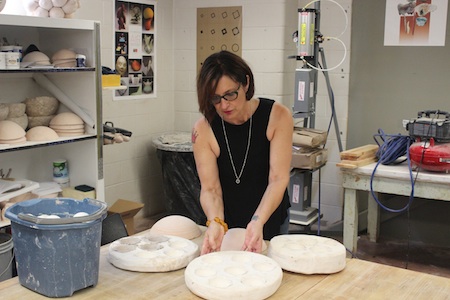 Virginia Scotchie, head of ceramics, experimented with her process as she created 75 platters for the Steinbeisser Experimental Gastronomy event on Sept. 25 at the Montalvo Arts Center in California.

Scotchie, a ceramic artist and head of ceramics at Carolina, was contacted over the summer by Martin Kulik, artistic director of a Dutch creative collective called Steinbeisser. Kulik was in the process of organizing the experimental event — which pairs top Bay Area chefs with contemporary artists to create a vegan meal highlighting cuisine, design and nature — and came across Scotchie’s work on her website. Kulik was impressed and invited her to create 75 ceramic platters for the dinner, which is on Sept. 25.

The Steinbeisser collective formed in 2012; its mission is to create contemporary cuisine at the highest level and to bring together “design, gastronomy and nature in an exciting and inspiring new context.” The dinner, which Scotchie will attend, is the first one the collective has presented in the U.S.

Despite the tight turnaround time, Scotchie jumped at the opportunity.

“Martin looks for artists he is interested in and chooses artists in ceramics, metals, wood and glass to create art for this very unique and amazing dinner,” Scotchie says. “I said sure, why not?” Kulik gave Scotchie feedback on the specific aspects of her work that he was attracted to, including particular colors, and then stepped back to let her create. “I really felt like I had the freedom to make what I wanted to,” she says. 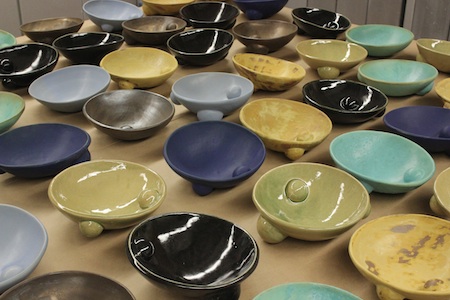 Scotchie's platters follow a generally similar design but vary in terms of size, type of glaze and placement of semi-spheres.

Scotchie was attracted not only to taking part in a unique and exclusive event, but also to the artistic puzzle of pairing of food and art and translating her sculptural skills into functional artworks.

“I always enjoy the making process,” Scotchie says. “I am a maker, and that’s very important to me — to explore what you can create out of one of the most abstract materials you could possibly work with,” she says. “So, just having that challenge — of how I would interpret my sculptural work into a functional piece — and just doing that research, coming up with this and then seeing it in use, is so exciting.”

The project found Scotchie developing new approaches to her sculpture. She has often used spheres in her work, but for this project she used semi-spheres and made them through a process she hadn’t used before.

“I got a bunch of styrofoam spheres and cut them in half, and I made a plaster mold out of them,” she says. She created molds in 10 different sizes and experimented with both size and placement. The platters follow a generally similar design but vary in terms of size, type of glaze and placement of the semi-spheres.

“The spheres that I put on the pieces are kind of molecular — so the idea is the nature that you don’t see, or that you might see if you looked under a microscope,” Scotchie says. 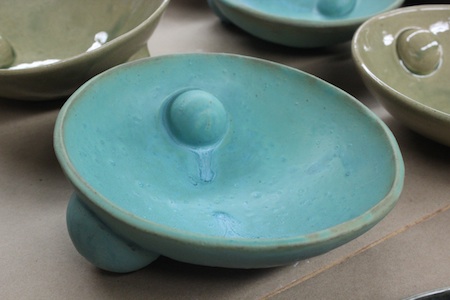 “The spheres that I put on the pieces are kind of molecular — so the idea is the nature that you don’t see, or that you might see if you looked under a microscope,” Scotchie says.

Interestingly, it’s not the first time Scotchie has made culinary pottery for something happening in California. She also created hundreds of Egyptian-style pieces for the 2014 TV movie “Hieroglyph.”

“We had to research Egyptian pottery and make peasant ware and royalty ware,” she recalls. “Actors and actresses would pretend to eat and drink out of them, but they never do.”

Each body of work Scotchie creates involves research, experimentation and a learning process. And this time, the guests will actually dine straight out of Scotchie’s pottery.

“As an artist in academia, I say it’s my creative research,” Scotchie says. “But it is also academic research, because I probably wouldn’t do anything like this if I were working in a studio making work to sell. It’s academic research because I had to explore and think about what I would create and how I would create it. This is not the first idea I came up with — there were many prototypes that just didn’t cut it. This is the one the seemed to make the most sense.”