Imagine leaving everything you’ve ever known behind for a one-way ticket to a country many people can’t easily find on a map. Imagine going alone to that place, a developing country filled with unfamiliar dangers and poverty unfathomable to your family and friends. Imagine doing it all at the age of 21. 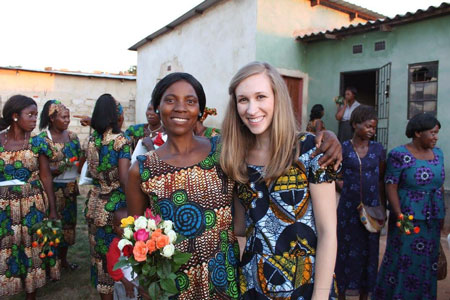 Lainess (left) had endured an awful loss yet was all smiles on her graduation day standing with her classmates and Amy Bardi, the founder of Clothed in Hope.

Amy Woodell Bardi doesn’t need to imagine. She did it all, and all for the women of Zambia. She bought that one-way ticket after graduating from the University of South Carolina in 2012 with a degree in fashion merchandising from the College of Hospitality, Retail and Sport Management. She started the nonprofit Clothed in Hope to empower women she knew barely or not at all. Four years later, she has seen success beyond her wildest dreams.

"I always said that if it just impacted one person it would be a success,” Bardi says on a recent visit to her alma mater. “I would have never imagined that we would have 175 names on our roster, and so many people waiting to join."

Clothed in Hope has grown exponentially from its humble beginnings with Bardi as the founder and sole employee. The story started when a college junior found the dream she had since junior high suddenly replaced by a new one.

"My sophomore year of high school, I kind of made this path for myself with the end goal of being a buyer in New York City." Bardi, a Raleigh, N.C., native, dedicated herself to that path. She came to UofSC and pushed herself to leadership positions on the Fashion Board and in her sorority. She built relationships with professors and with people in the industry. She was on her way. Then, in her junior year, she found a student ministry online organizing a trip to Africa.

"People were like 'Why?' I don't know. I think I just thought it was kind of cool," Bardi says, remembering with a smile. The initial plan was a six-week tour of South Africa, but that country was hosting the World Cup, and trip organizers suggested a change in destination, to Zambia. Bardi remembers her reaction as that many Americans would share. "I have no idea where that is."

Still, she went. The group was made up of college students from the Great Lakes region, and Bardi, who knew no one on the trip. What she saw there changed her life. "When I went, I was exposed a lot of the reality of an impoverished nation that I had never seen before,” she says. "It was eye-opening to see the poverty on such an individual level. We would see people who were starving, or children who had signs of physical abuse."

Bardi remembers Mary in particular. At 6 years old, Mary’s “job all day was to take care of her baby brother because her mom was too ill to take care of them." The story was not an uncommon one in Zambia, a place where AIDS has taken a heavy toll and health care for those living in poverty is theoretically available, but in practice rarely helpful.

"I had this vision standing in the yard of this orphanage of what would it look like to empower those women to take care of their kids to prevent orphans,” Bardi says. Many who go on similar trips have similar ideas, plans to change the world. Many come home and the determination fades. Not Bardi. "After four or five months of really mulling over this idea of empowering women to take care of their children and doing so through the vehicle of fashion and textiles, I just decided to go for it."

"I didn't know what that entailed,” she says. “I had no idea how to start a nonprofit, how to run a nonprofit. I had no idea how to do anything." She did have passion, and intelligence to match. Online research was her path to many answers, and she went to work. She returned to Zambia the following summer (2011) and spoke to five women there about her idea, and Clothed in Hope began to take shape.

"We came up with this idea of starting an educational program for vulnerable women,” Bardi explained. “It teaches them sewing, small business management, and over the years, we've also incorporated health classes, disease prevention, nutrition, maternal health, all sorts of things to create this education that most women didn't have."

In her senior year at UofSC, she was focused on her new dream. She found help in Kathy Smiling’s HRSM 301 class. The curriculum included fundraising for a nonprofit, and when Smiling heard of Bardi’s dream, she had the class adopt Clothed in Hope. By the end of the semester, Bardi’s classmates had brought in $10,000.

"If I didn't have that money, Clothed in Hope would have never started. I don't say that exaggerating. That was it. That was our seed,” Bardi says. "It's just incredible to see how you guys have supported us from the very beginning."

A lot of our program is not about the products. I see the products as a vehicle to get people involved in the educational support for our ladies.

With that seed in hand, she was off. After graduating from UofSC in the spring of 2012, "I booked a one-way ticket and moved to Zambia by myself." Laughing, Bardi recalled how naïve she was about the dangers of being a young woman living alone in a developing nation. "I have no idea why I did that. I think it was just being really dumb and 21 years old."

Despite the dangers, despite not fully knowing what she was getting into, Bardi succeeded. Clothed in Hope has grown to offer a 12-month program in which Zambian women begin with learning to thread a needle and a year later, know how to sew garments without patterns and run a small business.

"A lot of what I learned at Carolina, honestly, was a lot of what I incorporated,” Bardi says. “It was very heavily focused on the business aspect, so when they graduated, it would be a sustainable change, it wouldn't be they just knew how to draw pictures and make pretty things."

Bardi’s first class had just five women. It would not stay small for long. "Last year was really exponential growth for us,” she says. "It was really our women who led that. They said 'We have this skill now and we can't keep this from our friends and our neighbors. We have to get this out there.’ ”

Bardi replicated her initial program in a second compound in Zambia and added an outreach program in a smaller village. There, women learn to make items such as twist bracelets, which require fewer raw materials. Sex trafficking and prostitution are rampant in Zambia, and one of Bardi’s students will be launching a program to help some of the women trapped by those horrors.

"One woman who is the age of your students came to me and said 'The only reason I'm joining this group is because I want to learn this and teach all my friends who are prostitutes,’ " Bardi explains. The prostitutes would not feel safe coming to Bardi’s classes, so the young woman plans to go to them and show them a way to a better life.

Some of Bardi’s students have started their own businesses, with microloans from Clothed in Hope. Asked about the repayment rate on those loans, she smiled again. “100 percent. Every single loan has been paid back.”

Clothed in Hope also buys many of the accessories sewn by the Zambian women and sells them online and in stores in the U.S. After almost three years living in Africa, Bardi moved back to Raleigh in 2015 and runs the nonprofit from there, visiting Zambia several times a year. She turned over the day-to-day operations there to the best people for the job: her former students.

"We have 10 local staff running it now while I'm here,” she explained. “We have 10 people salaried and then we have 100 people plus waiting to join our program." The most recent expansion in Zambia was supposed to start small. It would not work out that way.

"A lot of our program is not about the products. I see the products as a vehicle to get people involved in the educational support for our ladies,” Bardi says. She adds that the women are looking neither for a handout nor for pity. “We try to tell their stories in a dignifying way. It's just amazing the vision these women have for their own communities."

Clothed in Hope products are available online, along with much more information on the nonprofit Bardi founded and the women it serves. The products will also be on display at a trunk show at Wildflower Boutique in Five Points Nov. 20. Amy Bardi’s dream of being a fashion buyer came true, but in a better way than she ever imagined.