Supporting the next mission

As Duke's first game of the NCAA Men's Basketball Tournament tipped off in Columbia, one big Blue Devils fan was not watching.  Army veteran Walter James loves basketball, but was happy to be in the kitchen with comrades in the Wounded Warrior Project.

"I’m missing Duke's first game today because being here for this meant so much to me,” he says.

The Wounded Warrior Project exists because its staff and supporters believe “that every warrior should have a positive future to look forward to.” The University of South Carolina shares that belief and is proud to be counted among those supporters.

The latest collaboration between the university and veterans came to fruition March 22 at McCutchen House, as a group of Wounded Warriors took part in a private Chef du Jour class designed especially for them.

"Doing these events and getting involved with universities or other community organizations can really help veterans adjust to civilian life, become part of the community and grow.”

“The Wounded Warrior Project contacted us to see if they could arrange a class that involved teamwork and communication,” says George Hendry, director of the Culinary Institute and instructor in the School of Hotel, Restaurant and Tourism Management at South Carolina. “I told them about our Chef du Jour classes for the community — they are a great way to enjoy a new challenge in a supportive and relaxed environment.”

The group of nine veterans, all of whom incurred injuries in the service, were joined by one very helpful young daughter. The evening started in a classroom, as Hendry explained how they would work together to prepare a four-course meal. From there, they split into teams and went to work in the kitchen — listening closely, following instructions precisely, as one would expect, and having a good time along the way. 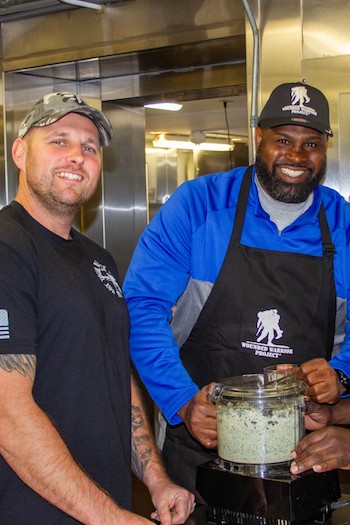 The veterans worked in teams to create a great meal.

Participants in the Chef du Jour class get to enjoy the results of their cooking, and the Wounded Warriors unanimously agreed that their work led to an extremely tasty feast.

“We had a great time. It was better than expected,” says Rusty Baggett, outreach specialist with the Wounded Warrior Project. “It was laid back, yet still professional, and the way it was presented was user friendly, even for people who weren’t well versed in the kitchen.”

Baggett served 16 years in the U.S. Army before his medical retirement after sustaining a jump injury as a paratrooper. He now helps coordinate events for Wounded Warriors in the Carolinas.

“My biggest drive is to get the veterans out in the community so they can get involved, reconnect and grow,” Baggett says. “When I first got out of the military, there were a lot of feelings, like, maybe the general public might not understand me. But I found that’s not the case. Doing these events and getting involved with universities or other community organizations can really help veterans adjust to civilian life, become part of the community and grow.”

The Wounded Warrior Project plans to do more events on campus in the future, and Hendry says it was a privilege to instruct the group.

“For me, the best part of having them here is their level of respect for each other, a few stories between themselves, and their attitude to learn and have fun at the same time,” he says. “I cannot wait to do another class for them.”

The university has made veterans a priority in many ways. Information on veterans programs and services available on campus are posted on the registrar’s website.

More information on cooking, dining and wine tasting events for the community are available on the College of Hospitality, Retail and Sport Management’s website.