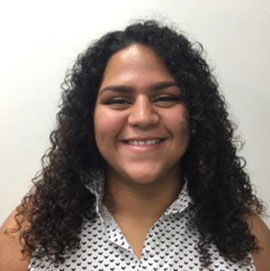 "Ever since I was a child, I've known that I want to be an attorney and, specifically, practice immigration law, but I had a narrow vision of it. Now I'm learning that there are many different things included within immigration law."

Ever since I was a child I’ve known that I want to be an attorney and, specifically, practice immigration law, but I had a narrow vision of it. Now I’m learning that there are many different things included within immigration law.

I’m a daughter of immigrants, so I know the legal battle that people face to be in this country. So many people that I know are either undocumented or at some point in their life have been undocumented. I thought that here in D.C. there would be more organizations dedicated to this cause and, fortunately enough, I was able to find an organization that specifically works with the undocumented population.

What does your internship entail?

We primarily work on new visa cases for undocumented victims of crime. One of the first stages is to request a police report, proof that the crime occurred how the victim stated. So I’ve just been talking to police departments and sheriff’s offices across the country to get these reports because they are essential to these victims’ applications. Sometimes the victims themselves have a police report number, but the cases are old or they don’t remember exactly when the crime happened. Sometimes it’s hard, but you’re helping someone, so that makes it worth it.

What about life in the city? Had you ever been to D.C. before?

No, I had never been to D.C. I take the metro to work every single day, and that’s something new for me. And then being car-less, you have to walk everywhere. That’s nice, too. In Columbia or in Myrtle Beach, where I’m from, you get everywhere by car. It’s nice that on the way to work I pass by the White House and so many different things. Every day you see something new. This Thursday, we’re going to see our first play, so that should be fun. I’ve never actually seen a play like this before. That will be something new, as well.

How about life in the house? What’s it like living with so many other students under one roof?

We all have pretty busy schedules so we come home, talk about our days. We had a debate in class on Monday, and we all agreed that it got pretty intense, and a little heated, but once we got home everything was fine. That’s something we’ve talked about. We try to leave everything we debate in class in class, so when we come home we get along. I’m kind of not looking forward to my presentation on immigration for that reason, but I’m going to do it anyway.