Listen up, there’s going to be a test — if Dan Fogerty has his say, a whole battery of them.

According to the National Institute on Deafness and Other Communication Disorders, one in three Americans over the age of 65 have some degree of hearing loss. The traditional hearing aid is an effective means of amplifying sound, and can be very important for treating the main limitations in speech understanding associated with hearing loss. However, it’s less than a perfect technology. Partly that’s because amplification can cause distortion and partly that’s because competing sounds can muddy the mix, especially in a noisy environment.

The challenge is to be able to improve these devices, but for them to still be affordable, too. The hardware is there, the capability is there, but are we using it as effectively as we could be?

But there’s another big variable in what we do and don’t hear, and how we respond to both — and that’s our individual cognitive abilities. As Fogerty explains, the brain plays an even bigger role in processing speech than you might think, and for people with hearing loss, understanding that role could make a big difference.

“When a person comes into this situation, they bring a lot of things to the table,” Fogerty says. “It’s not just the ear. The mind is processing things. Understanding the cognitive requirements, and knowing what are the cognitive capabilities of a given individual is crucial, too.”

But whereas one line of research focuses on improving hardware, Fogerty’s lab is focused on software — the kind that can improve that existing hardware’s functionality. “We’re not necessarily writing the programs but coming up with the parameters necessary for those programs,” he says.

And one of the biggest factors? The timing of auditory signals. In fact, temporal signals from our ears affect not just how much we hear but how well we understand language — even when the words drop out of earshot or get muted by competing noise.

“Recent developments in the field are showing that the temporal signal is crucial for understanding speech,” says Fogerty. “So instead of taking a static view of speech, we’re looking more at dynamic changes and trying to find a compromise, where we’re boosting the signals that people can’t detect but also preserving temporal changes that are very important for understanding speech.”

Fogerty, whose current research is funded in part by a $1.5 million grant from the National Institutes of Health, is creating a battery of tests that can be used to assess how cognitive abilities affect an individual’s processing of speech in different dynamic listening environments.

Among other diagnostic tasks, clients in Fogerty’s lab listen to a portion of speech in which some words are audible but others are inaudible and are then asked to fill in the blanks. That cognitive ability to compensate for what isn’t heard by the ear could help audiologists customize hardware to better serve the client’s specific hearing needs.

“Once we have a profile of how listeners perform, then they’ll run through the experimental tasks that focus on how they actually use different acoustic cues in different situations,” he says. “From there, we’ll look at standard amplification strategies and see how the performance varies.”

“One of the benefits of the direction I’m pursuing is that it relies on using existing technology,” he says. “The challenge is to be able to improve these devices, but for them to still be affordable, too. The hardware is there, the capability is there, but are we using it as effectively as we could be?” 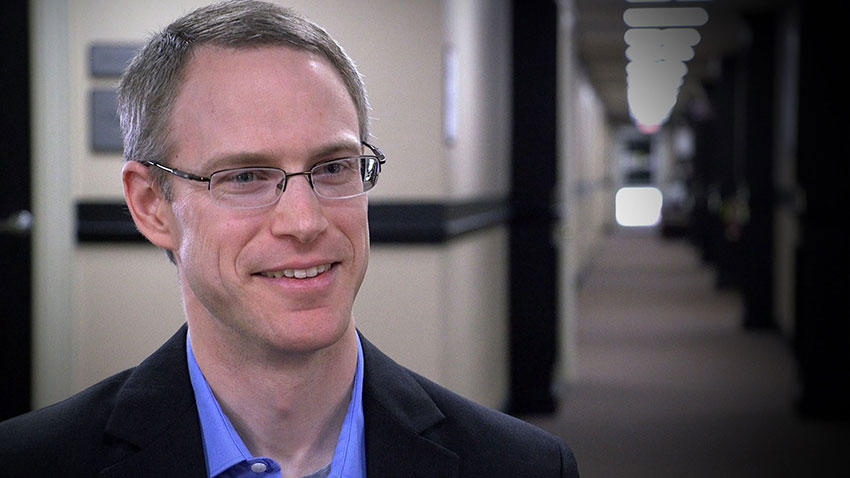