Honor for a Lifetime

Andy Gillentine laughed when asked about receiving a lifetime achievement award when his lifetime is far from complete.

Gillentine, professor and associate dean in the College of Hospitality, Retail and Sport Management at the University of South Carolina, is neither retiring nor dying, but he did recently join a very distinguished list of winners as he received the Sport Management Lifetime Achievement Award from the Applied Sport Management Association.

The award, established in 2008, recognizes individuals who have made significant contributions to the academic field of Sport Management.

“He is the reason students like me join the SPTE program and the reason they stick around.”

Gillentine accepted the award and delivered the keynote address at the assocation's annual conference, hosted by Louisiana State University on Feb. 24, sharing his thoughts on sport management as a profession and its future direction.

"It’s a very nice honor," Gillentine says. "To be included in that list of people that have received this before, it's good company."

He says the award is a compliment not just to him, but also to the standing of the university and the College of Hospitality, Retail and Sport Management and the sport and entertainment management department in particular.

Dean Haemoon Oh says he was proud to hear about the award, but not surprised.

“Andy’s dedication to quality education is unrivaled not only in the field of his expertise, sport management, but also in our college where he has served as associate dean of academic programs,” Oh says. “We are proud of him receiving this award, reflecting his outstanding career and the significant positive impact he has made on countless students and colleagues.”

“Andy is a worthy recipient of this award,” Brown says. “He has been recognized continuously for his commitment to teaching and research and has been a mentor to many in our field.” 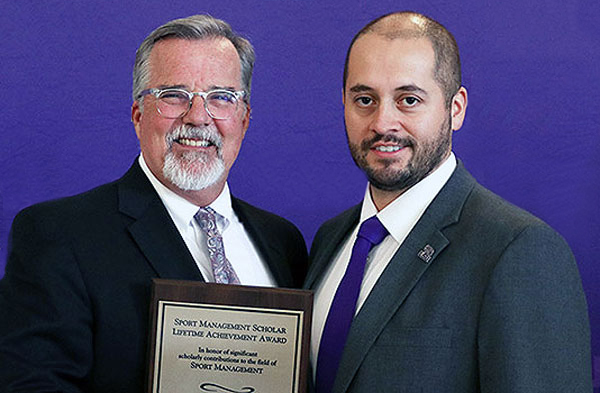 Gillentine has conducted research projects for numerous sport organizations that have resulted in more than 50 publications, four books and over 100 national and international presentations. His areas of research include sport marketing, tailgating, entrepreneurship and innovation, customer service and professional development. His textbook, "Foundations of Sport Management," co-edited with Brian Crow, is widely used in sport management programs throughout the country and is currently entering its third edition.

Among his many accolades, Gillentine was named Distinguished Sport Management Educator by the North American Society of Sport Management in 2012, becoming only the fifth person to receive the honor.

For all the honors he has earned, however, the most impressive thing about Gillentine may be the impact he has had on students, and the testimony current students and alumni like Kelly Ballance,’15, give about him.

“He is the reason students like me join the SPTE program and the reason they stick around,” Ballance says. “He has positively influenced me as collegian and as a person, more than any mentor I've had, never once giving up on me or my dreams and always keeping his office door open when I needed advice or a friend to listen.

“He is supportive, he is wise, and he is the epitome of a well-deserved recipient of the lifetime achievement award,” she says. “His infectious positivity and encouragement and that radiant smile are probably what got me through college, and I am a better person having known him — we all are.”