Tangles of grape vines, lush plums and dangling pears, oyster plants and delicate roses — you wouldn’t know it today, but 200 years ago the downtown Columbia hilltop now dominated by the University of South Carolina's new law school was thick with competing gardens. And the most prominent of those gardens, across Gervais Street from the new law building, was owned by Nicholas Herbemont, a renowned horticulturalist and the university’s first French instructor.

“That entire block was a sort of horticultural paradise,” says David Shields, professor of early American literature and self-styled culinary historian. “There are stories from early Columbia of women being bedewed with purple if they walked on that side of the street under the vines. His great dream was actually that the Midlands of South Carolina would become a wine district.”

To listen to Shields’ colorful descriptions is to enter a world of vanished splendor. “Herbemont’s wife, Caroline, was a breeder of roses, including the Herbemont rose, a noisette musk cluster rose, white with a pinkish hue,” he says. “The top of the hill in Columbia was considered almost like the gardens of Babylon!” 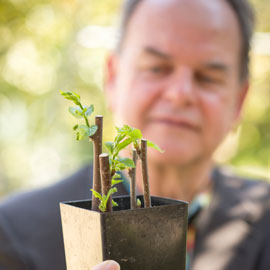 Shields has license for a little hyperbole. Over the last two decades, he has collaborated with farmers, horticulturalists and chefs interested in bringing back lost cultivars, and he has traveled the world to find them. And while the downtown Columbia block three streets from his campus office would be dwarfed by contemporary farms and gardens, it’s a virtual backyard for his imagination, not to mention his research.

Witness the Hicks Everbearing mulberry, a cultivar produced by Nicholas Herbemont around 1813 and one of Shields’ many obsessions. As Shields explains, Herbemont crossed the hearty native red mulberry with the more delicate Asian white mulberry, a plant prized by entrepreneurs and schemers seeking to establish a silk industry in America. Herbemont planted approximately 20 of the new trees on his property and wrote at length about their propagation, according to Shields, but his goal wasn’t mulberry pie or preserves or fruit for the table. Unlike many of his contemporaries, he wasn’t hoping to enter the silk trade, either.

“He certainly wrote about silk, and he thought silk would be part of the future of South Carolina, but from the first, he intended it as food for hogs,” Shields says. “His intention was to create a mulberry that didn’t just drop fruit for a month and a half but that would produce enormous amounts of fruit for four months.”

And his mulberries did well — not just in his Columbia orchard but throughout the Southeast.

Thanks to arborists William and Adam Summer, who ran the famed 19th century Pomaria Nursery 30 miles from Columbia and distributed Herbemont’s cultivars to other nurseries, the new mulberry wound up in orchards, gardens and backyards far from their original breeding ground.

The tree was eventually rechristened the Hicks mulberry by an arborist in Georgia, but Herbemont would be credited parenthetically throughout the 19th century. And as Herbemont intended, its plentiful fruit did indeed become feed for livestock, including not just hogs but also chickens, both of which, according to Shields, were prized for their succulence.

“Every nursery had Hicks mulberries until, I’d say, the 1880s, 1890s, but mulberries suffered this extraordinary decline in repute,” he says. “One, the white mulberry boom busted when streams of silk fortune never materialized, and then the feed systems for hogs and chickens goes almost entirely to grain.”

It’s a familiar story to Shields and his many collaborators, who have thus far reclaimed more than two dozen heirloom varieties of fruit, vegetable, grain and legume. A move toward industrial farming and food manufacture improved yield and boosted industry profits, but crop diversity suffered and, ultimately, so did taste.

“It isn’t disease that kills off the Hicks mulberry. It’s a paradigm shift in how to feed livestock,” Shields says. “In the United States, the mulberry ceases to be grown in the 20th century as a food source for animals, and the ever-bearing mulberry became just the thing that ruined your mom’s rug.”

In time, Herbemont’s once-ubiquitous cultivar became the foodstuff of lore, something scholars like Shields might read about but never sample — until he and alumnus Keith Mearns, ’12, a horticulturalist at Historic Columbia, learned of a vestigial orchard near Mount Olive, N.C.

“Keith and I tracked down a man named A.J. Bullard, this retired dentist, who is also an extraordinary fruit savant,” says Shields. “He himself is a great fan of mulberries, and he grows all sorts of them in his backyard. His favorite are the black English-Persian mulberries, but he knew about the existence of the old historic ones we were looking for.”

Once we get these mulberries back, maybe there is a chef that can make something out of them that makes something new out of their less-inviting qualities — their squishiness, their peculiar and uncomplicated sweetness.

Swallowed at some point by a pine plantation, the nine gnarly, 150-year-old Hicks mulberry trees Bullard led them to were spaced in 40-foot intervals, according to 19th century pomological practice. The nearby presence of persimmons gave further indication that the property had once been a hog farm.

After agreeing to a trade — “Everything in this world is a deal,” Shields says with a storyteller’s knack for drama, “so we took him some Sandhills rosemary” — Bullard showed Shields and Mearns where they could take a few Hicks cuttings. These were then brought to the grounds of Historic Columbia, at the 18th century Seibels House, just six blocks north of the site where Herbemont grew the original stock.

History was coming full circle, the project’s literal fruition was just two or three years off and Shields’ imagination started to play with possibilities. Maybe you could make mulberry sugar, maybe a chef could transform the fruit’s cloying sweetness through molecular gastronomy, maybe someone could breed organic chickens under a Hicks mulberry and reintroduce a forgotten flavor. “It’s worthwhile personally,” Shields says. “Since I’m hunting for good flavor, I tend to eat very good stuff. There is a really immense gratification in adding a significant thing to the quanta of human experience.”

Unfortunately, the initial experiment failed. None of the cuttings took root.

“Getting them to root is probably the hardest part,” says Mearns, who has since tweaked his approach. “It’s sort of a mysterious process. You wait for callous formation, like a wound. After that, it roots out. And if we can get them to root, we definitely have a place for them.”

As of early April 2017, the latest cuttings were sprouting verdant shoots. Once roots establish, Mearns says, the saplings will be transplanted to the gardens at the nearby Robert Mills house, where Historic Columbia is already cultivating other native species, including another Shields reclamation, the Herbemont wine grape. If all goes well, the first mulberries will appear alongside them in a few years.

Time, luck and outside interest will determine where things go from there, but Shields says hog farmers have already contacted the Columbia-based team as well as a woman in Virginia who has since taken her own cuttings from the Mount Olive trees. “If you grow heritage pigs, you want to feed them the stuff that made them famous,” Shields says.

But for the berries themselves to become famous again, the trees need to do more than just bear fruit, says Shields. As with other reclaimed produce — the Bradford watermelon from Sumter, S.C., the now prized Carolina Gold rice from the Lowcountry, the Jimmy Red corn now being used by whisky distillers — Shields would ultimately like to see the Hicks mulberry reinterpreted.

“Once we get these mulberries back, maybe there is a chef that can make something out of them that makes something new out of their less-inviting qualities — their squishiness, their peculiar and uncomplicated sweetness,” he says. “What you want is to exercise all of the free play that human imagination, including culinary imagination, has at its disposal, to take that excellent flavor, mingle it with other flavors or process it in new ways.”

Which is not to say Shields wouldn’t sample a chicken dish like those he has encountered in his research.

“I would love to taste a mulberry-fed chicken. I’ve read about its legendary savoriness,” he says. “But the flavor is the driver. Stuff can have a great story, but if it doesn’t taste good, people aren’t going to buy it. If it tastes good and has a story — bingo, you’ve got something.”