A conversation with Stanfield Gray might take you anywhere 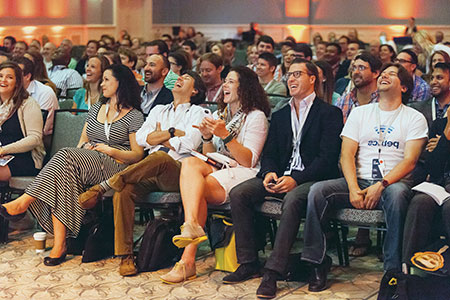 One minute he’s extolling the writings of Thomas Paine and Allen Ginsberg, the next he’s discussing the momentum of the digital economy in the South he so loves.

But don’t think those subjects aren’t related. For Gray, the ’92 English Honors grad who has established the Southeast’s pre-eminent digital conference, it’s all about putting ideas and people together for the betterment of the region.

“I’ve always been interested in writing and music and technology and all things creative, and particularly how they intersect, where those connections are,” he says. “And keeping ideas moving forward.”

The ideas definitely brim and bubble at his annual Dig South Innovation Conference, a three-day gathering of high-level executives, investors, and builders of fast tech startups. It happens in Charleston, Gray’s adopted hometown, and bears many of his hallmarks. Along with 50-plus sessions and workshops, there’s always music: Gray’s a rock guitarist who almost became a musicologist. There’s also plenty of clever wordplay: Besides its Dig(ital) South title, attendees can attend nightly networking “shindigs.” Its website asks viewers to “dig our sponsors.”

Those sponsors are many, impressive, and most notably, repeat. Same goes for the attendees and some of the presenters. Now in its fifth year, Dig South went from 450 attendees its first year to 1,100 the next. Now it draws 2,000.

“Our goal is not to grow to 20,000,” Gray says. “Our goal is to focus on knowledge and networking and developing relationships between executives and entrepreneurs.”

With Dig South, Gray is developing his own entrepreneurial skills, both as master event planner and content creator. While computer-smart, he’s quick to say he’s not a coder. His broad focus is making sure the South doesn’t lag behind the rest of the country, particularly now that the internet allows entrepreneurs to build their companies anywhere. A year in New York exposed him to big-time conferences and the realization that Silicon Valley, Boston, Chicago and New York were leaving the South behind. Back in Charleston in 2012, he thought the time was right for something similar but unique to the South. 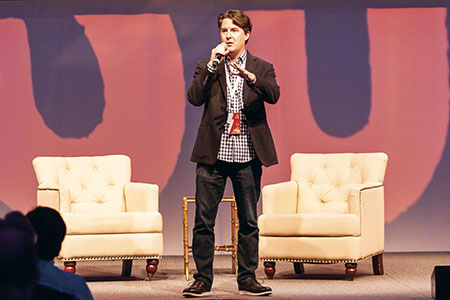 Gray giving a presentation at the Dig South Innovation Conference.

The recipe is working. Presenters — there are about 150 each year — have included representatives from Vox Media, Facebook, CNN, Twitter, the New York Times and Buzzfeed. Gary Vaynerchuk, the web-savvy business builder and venture capitalist, presented the Super Keynote in 2016.

“He said there were tremendous opportunities in the South and came twice in a row, and he seldom goes anywhere twice,” Gray notes. “Our participants are surprised by how strong our companies are.”

Spend some time on digsouth.com and you’ll see Gray and his team are finding and featuring innovative entrepreneurs and companies in major Southern metros. In time, Gray may launch complementary Dig South Conferences in Atlanta and other Southern cities. Promoting and connecting the South as a region is his way of keeping talent from leaving for bigger markets.

“If Atlanta and Raleigh-Durham and Columbia collaborate more and invest capital, we’ll better compete with other parts of the country,” he reasons. “For example, it’s better for Columbia to lose a company to Atlanta because they can more readily partner and collaborate than if they choose Silicon Valley. It develops the regional ecosystem.”

A Spartanburg, South Carolina, native, Gray has been influenced by the civil rights movement, punk rock, the beatniks, bluegrass, jazz, blues, augmented reality and much more. To him, the South is a great place to live, rich in culture and foodways, literature, history and friendly people.

“Why should you have to give those up to work in a business or industry in another part of the country?” he says.

He wants to make sure his son and daughter — wife, Sunny, is Dig South’s CFO — have more opportunities after college than he did. Gray, who earned a master’s in southern studies from the University of Mississippi, maintains there’s more to the South than what happened in the past. In fact, it was a science-fiction course with John Ower at Carolina that helped him think about an alternative vision for the future.

“I appreciate and respect history,” Gray says, “but we can dedicate equal time and energy to imagining a better future.”