On the hunt for history 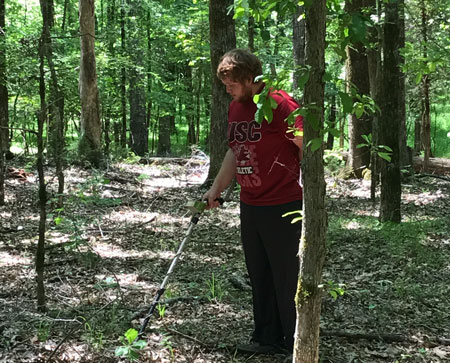 USC students spent three weeks this summer sifting for clues to the past at the Ninety Six National Historic Site. They used metal detectors to examine the soil.

Monzel was one of five University of South Carolina students who joined archaeology professor Steven D. Smith, the director of the South Carolina Institute of Archaeology and Anthropology, at a field school last month at the Ninety Six National Historic Site. The students searched for historic remnants of a trading post established by 18th century entrepreneur Robert Gouedy in the 1750s. The post was later fortified by the Americans in 1759, expanded in 1761, and was twice attacked by Cherokee Indians.

“We’re pretty sure we found the edge of the palisade wall,” Monzel says.

Ninety Six, an early colonial settlement, played an important role in South Carolina history. Besides Gouedy’s post, the park includes the colonial village of Ninety Six and two Revolutionary War forts. The task of helping document that role kept Monzel and his fellow searchers sifting through layers of discolored soil, two centimeters at a time.

“I’m interested in finding out what happened there,” says Monzel, a senior anthropology major from Bluffton. “It tells a story of what was going on. We can tell what people ate, what tools they were using.”

“All of those parks are Revolutionary War battlefields that now share a superintendent and management team,” says Sarah Cunningham, chief of integrated resources and facilities for the Southern Campaign of the American Revolution Parks. “We were able to devote some funding and put that into an agreement and work with Steve to create a field school. The agreement is broad enough that we can initiate work at any other parks.”

Only so much is written down. Being able to see what’s underground can give really good insight.

Along with helping establish the palisade ditch, the USC students also discovered a trash pit filled with time-weathered treasures such as animal bones and arrowheads. Monzel also unearthed ceramic and glass fragments and a few yet-to-be-identified teeth.

“The students are getting archaeological experience. They’ve learned a lot,” Smith says. “We hope to establish this as a continuing program with the National Parks Service.”

Cunningham says that while a fair amount of archaeological work has been done at the Ninety Six site, not much work has taken place in recent years.

“There are a lot of things that we don’t know yet about Ninety Six,” she says. “One of the ways that we can learn more and tell the story of what happened here and the people who lived here is through archaeology. Only so much is written down. Being able to see what’s underground can give really good insight.”

Other finds from the Ninety Six field school included musket balls, lead shot and pieces of a cannon.

“I really enjoyed just going out there and digging and seeing what we could find,” Monzel says.