‘If I can help spare one family…’ 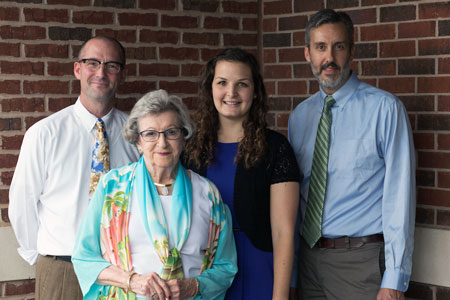 Patricia Beckler pulls no punches when it comes to her feelings about the disease that robbed her and her husband of their golden years. “Alzheimer’s has been the most devastating thing that has happened to our family,” she says.

John Beckler had a long career with Eastman Kodak and Eastman Chemical Co., ending in 1996 when he retired at age 64 after he began showing symptoms of forgetfulness that would ultimately lead to a diagnosis of Alzheimer’s and 14 years of decline and deterioration.

Those early symptoms were the uncharacteristic forgetting of appointments, meetings and plans he and his wife had made.

“We had a crisis one night when we were supposed to meet for dinner in Five Points,” Beckler says, adding that her husband drove around the restaurant and entertainment district in Columbia for a bit, then forgot why he was there. “After that crisis, he said, ‘Something is terribly wrong.’ From that time on, it was a family journey.”

John Beckler died in 2010 not recognizing his five grand-children, his two daughters or even his wife of 54 years.

Beckler wrote a book in 2015, “The Long Goodbye,” detailing her family’s struggle with Alzheimer’s. She gives the books away to book clubs, Sunday school classes and other groups and includes information on how people can donate to the S.C. chapter of the National Alzheimer’s Association. She says donations from folks who have received her book total about $20,000.

“Alzheimer’s is one of the most expensive diseases in our country,” Beckler says.

For her own philanthropy, Beckler has invested in finding treatment and possibly a cure for the disease by donating to research efforts at the University of South Carolina School of Medicine in Columbia. “I became aware of little pockets of research at the School of Medicine,” Beckler says. “It was delightful to me that our university was going forward with this research.”

Alzheimer’s has been the most devastating thing that has happened to our family.

Specifically, Beckler has donated $100,000 to help fund work by researchers Jim Fadel and Larry Reagan, who are looking at the connection between insulin and cognitive decline.

Insulin helps provide energy to cells and regulates the body’s blood-glucose levels. Too much and you have a condition known as hypoglycemia, which can be deadly if untreated. Too little and you have diabetes, which damages vital organs over a lifetime. However, very little insulin is found in the brain.

Reagan and Fadel want to see whether a straight shot of insulin through the nasal passages into the brain can stop or even reverse cognitive decline after it has started.

“When I realized the financial need at the medical school, I put aside other commitments,” Beckler says. The John D. and Patricia L. Beckler Fellowship in Alzheimer’s and Cognitive Diseases Fund provides stipend support for a neuroscience doctoral candidate to study the mechanistic basis of age-related cognitive decline.

Fadel and Reagan say one of the best parts of the gift Beckler made to the School of Medicine is that it will support not only their research, but also the creation of a new Ph.D. in the field.

“By supporting the training of a new Ph.D. scientist who’s got a career interest in aging and cognitive decline, it’s also going to have a multiplier effect by supporting the development of that career downstream,” Fadel says.

Beckler says she hopes their work can help other families. “If I can help spare one family from what we went through, it will be worth it,” she says.