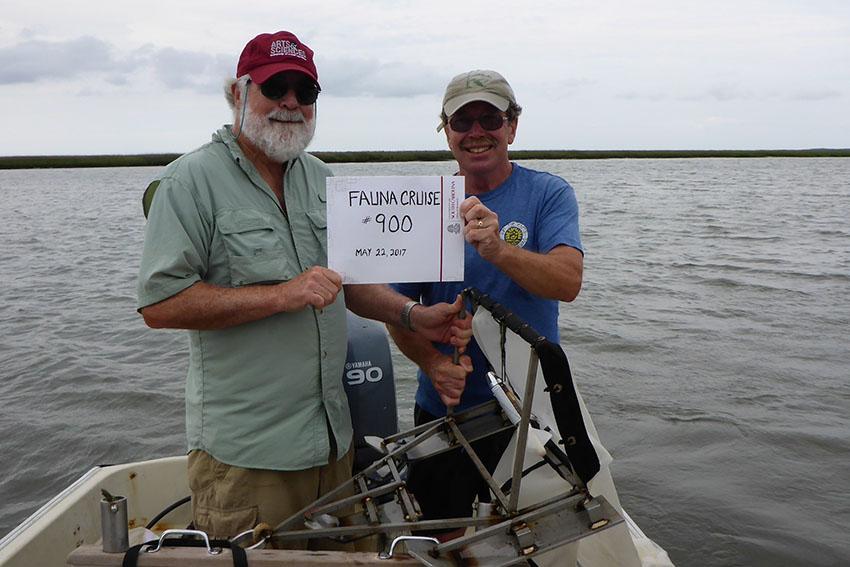 Populations of the smallest animals living in the pristine waters of the North Inlet Estuary near Georgetown, South Carolina, have decreased steadily throughout the past three decades, according to University of South Carolina researchers.

Dennis Allen, research professor and resident director of the Baruch Marine Field Lab, has studied mesozooplankton in the estuary for 36 years. He and his team this summer completed the 900th cruise to collect samples for the study that began in January 1981.

The team’s findings are especially significant to those who fish in S.C. waters and enjoy eating seafood.

“Every big animal you can think of that lives in our salt marshes and waterways produces microscopic larvae — clams, fishes, starfish, crabs, shrimp,” Allen says. “That means that plankton serves as the nursery for larger animals including the ones we harvest. If we have fewer larvae today, that means fewer adults are likely to be caught and consumed tomorrow.”

Precisely what is responsible for the decline — up to half of some populations since the 1980s — is not entirely clear. Allen says increasing water temperature, changes in precipitation and salinity patterns and rising sea level are likely candidates.

“We have a really rare opportunity here in the North Inlet Estuary to look for long-term changes without direct effect of human activity and impact,” he says. “So, the changes we are seeing are driven by something on a much broader scale — the atmosphere, changes in our climate.”

Allen’s research is likely the longest running study of this type along the U.S. coast. The Baruch Marine Field Lab, part of the College of Arts and Sciences’ Belle W. Baruch Institute for Marine and Coastal Sciences, has collected samples using consistent procedures at the same time of day with the outgoing tide every two weeks for the past 36 years.

The project started with funding from the National Science Foundation in the 1980s, continued with National Oceanic and Atmospheric Administration support in the 1990s, and has relied on various other funding sources over time, most recently leaning on students and community volunteers to staff the boat trips for collecting and processing samples.

It’s not uncommon for research studies to last five to 10 years, but more than three decades is unusual because of factors like funding, logistics and personnel changes.

That means that plankton serves as the nursery for larger animals including the ones we harvest. If we have fewer larvae today, that means fewer adults are likely to be caught and consumed tomorrow.

Allen estimates that over the years, more than 100 students, staff and volunteers have been involved with the project, either serving on the boat’s crew or studying samples under microscopes. He’s especially appreciative of Paul Kenny who’s been on staff at the Baruch Institute for 35 years and serves as captain of the boat and organizes collection crews.

The study’s longevity is also attributable to Allen’s dedication to the research and South Carolina’s coast. As a child, Allen possessed a great curiosity for nature and enjoyed exploring the coast of his home state, New Jersey.

Allen is proud of the team’s investigative perseverance, but there also is a downside to being unique.

“It makes it challenging because it’s hard to extrapolate what we have found here to other areas,” he says.

North Inlet Estuary, the relatively undisturbed 16,000-acre Hobcaw Barony near Georgetown, was owned by Belle W. Baruch and preserved as an outdoor laboratory for studying coastal plain ecosystems through a foundation established after her death in the 1960s. Today the Belle W. Baruch Institute for Marine and Coastal Sciences includes the Hobcaw Barony field lab as well as facilities in Columbia and Charleston.

Allen notes there are decreasing trends in similar animal populations in other coastal communities pointing to the idea that the downsizing in the North Inlet is “driven by something far bigger” than local conditions.