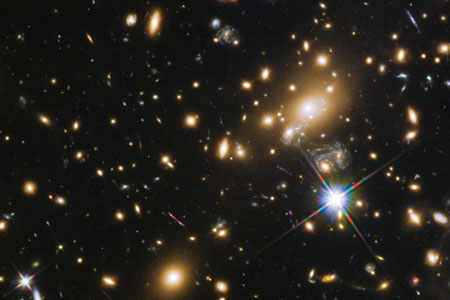 Astronomy professor Steve Rodney and doctoral student Justin Roberts-Pierel are helping to develop new space telescopes that will be able to look into deep space and find stellar explosions that occurred near the dawn of time.

You probably weren’t thinking about this weeks ago while watching the solar eclipse, but it took eight minutes for those solar rays to travel from the sun to the Earth. Kind of mind blowing when you think that traveling at the speed of light — 186,000 miles per second — those solar photons need 4,800 seconds to get from there to here.

Now wrap your brain around this: Astronomy professor Steve Rodney and doctoral student Justin Roberts-Pierel are part of a NASA-funded project that could locate stellar explosions so far away that their light has taken more than 13 billion years to reach us. The universe is a little less than 14 billion years old, so that means those stars exploded — give or take a few million years — near the dawn of time.

“We’re looking ahead to the next generation of space telescopes after the Hubble that will allow us to look much deeper into space," says Rodney. “One of the results of that is finding rare and peculiar stellar explosions that are so far away, it’s taken the photons most of the age of the universe to reach us."

NASA’s James Webb Space Telescope is expected to launch next fall, and it will scan a fairly narrow range of sky but with the ability to look very deeply, to the edge of the universe. Rodney and Roberts-Pierel have NASA funding to develop software that will simulate what the James Webb will see when it first opens its eye to the early universe and help astronomers to understand what they are seeing when those far away stellar explosions appear.

They’re doing similar work on the WFIRST (wide-field infrared survey telescope), another NASA telescope that will be able to scan large swaths of the sky, though not as deeply as the James Webb. The WFIRST won’t launch until the early 2020s — it’s still under development — so Rodney and Roberts-Pierel’s work could play a significant role in optimizing the telescope’s ability to see new objects in space.

“Like the Hubble, both of these telescopes will be deployed in space,” Rodney says. “The James Webb and the WFIRST will be able to make detections that are completely inaccessible to us now. They will revolutionize what we’re able to see from the ground, even with enormous modern telescopes.”

“We’re looking ahead to the next generation of space telescopes after the Hubble that will allow us to look much deeper into space. One of the results of that is finding rare and peculiar stellar explosions that are so far away, it’s taken the photons most of the age of the universe to reach us."

Rodney and Roberts-Pierel will also study a phenomenon known as gravitational lensing, which occurs when light from distant celestial bodies is bent by the warping of space. This distortion is caused by a massive object — a planet or galaxy cluster, for example — that lies between Earth and the distant target object. Light from the distant body becomes visible to astronomers because the massive body between it and the Earth acts like a gravitational magnifying glass. The mass of the intervening body bends the fabric of space, forcing light to follow a curved path and focusing many disparate light paths. Einstein first predicted this effect, and it has now expanded into a vibrant subfield of astrophysics.

“We will soon be able to reach back even farther in time to see even more distant stellar explosions,” Rodney says. “To get ready we're studying what we can expect to find, and getting our tools ready so we can get the most out of these very early stellar systems when we find them."

So what’s the point of being able to look so deeply into space? Astronomers have an answer.

“When we look back at the very beginning epoch of the universe, it doesn’t have a direct impact on our day-to-day lives on Earth, but it contributes to the larger tapestry of our understanding of the universe as a whole,” Rodney says. “Partly, we are driven by natural curiosity, wanting to understand our origins and the whole grand scope of the cosmos. But it's also true that the more we can build up a complete understanding of the way the universe works, the better we can understand our little corner of it.

“We’ve been building up that story over time, and it’s a very complex picture. We’re now reaching back to the very first part, the beginning of that story.”