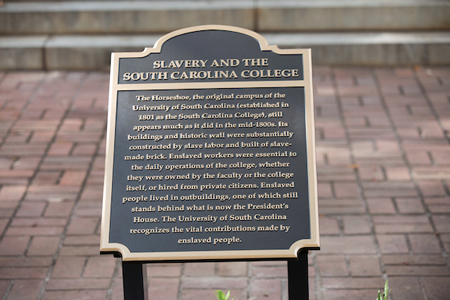 The names — Amanda, Anna, Henry, Jack — are so ordinary they could have come from any class roster on campus.

But these particular names have an extraordinary provenance. They belong to enslaved workers who helped build or worked at South Carolina College — the precursor of the University of South Carolina — before the Civil War. The enslaved workers’ names and acknowledgement of their contributions at the institution during its antebellum era are now immortalized on two bronze historic markers that will be unveiled in a ceremony Dec. 5 at Rutledge Chapel on the Horseshoe.

“These markers have been in the works for quite some time,” says John Dozier, chief diversity officer for the university. "(History professor) Bob Weyeneth’s students conducted research several years ago that has given us the information we have today about the university’s use of enslaved people.”

“One purpose of the marker identifying the former slave quarters is to point out an historic building that has not previously been identified like other historic buildings on the Horseshoe,” says Elizabeth West, university archivist. “These markers are a way to begin representing other communities in the university’s past. We have so much more history to share about this institution than just the white men who had power then.”

With West’s assistance, Weyeneth’s students began searching the university’s archives several years ago for evidence of enslaved people used during the campus’ construction and beyond. Combing through receipts and financial reports, the students were able to trace the sources of slave labor that made bricks for the Horseshoe wall, helped construct buildings and assisted with feeding and housing the student body. The students assembled their research into the “Slavery at South Carolina College” website.

“The college itself had a few slaves, but much of the enslaved labor force was contracted by South Carolina College from private citizens who owned slaves,” West says. “Faculty members also had their own house slaves who lived in outbuildings behind the faculty residences on the Horseshoe. 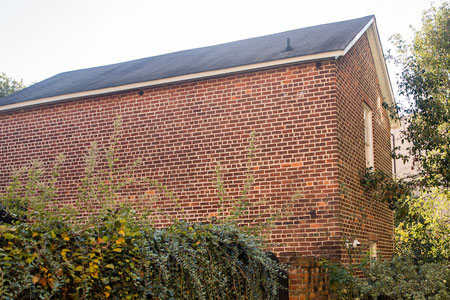 A former kitchen and slave quarters near what is now the President's House is the only remaining such structure on campus.

"Slave Quarters — This last remaining kitchen and slave quarters on campus stands as a tangible link to the enslaved people who lived and worked here. South Carolina College, forerunner to the modern university, owned a number of slaves and hired countless others between 1801 and 1865. Enslaved people made significant contributions to the construction and maintenance of college buildings and to daily life on campus. Despite limited references to individuals, enslaved workers who appear by name in archival records include Abraham, Amanda, Anna, Anthony, Charles, Henry, Jack, Jim, Joe, Lucy, Mal., Peter, Sancho and his wife, Simon, Toby, and Tom. Naming these individuals is an effort to remember all of those who made significant and substantial contributions to the University of South Carolina.”

The second marker will be mounted near the top of the Horseshoe and reads as follows:

“Slavery and the South Carolina College — The Horseshoe, the original campus of the University of South Carolina (established in 1801 as the South Carolina College), still appears much as it did in the mid-1800s. Its buildings and historic wall were substantially constructed by slave labor and built of slave-made brick. Enslaved workers were essential to the daily operations of the college, whether they were owned by the faculty or the college itself, or hired from private citizens. Enslaved people lived in outbuildings, one of which still stands behind what is now the President’s House. The University of South Carolina recognizes the vital contributions made by enslaved people.”

Placing the markers on the historic Horseshoe is appropriate, Weyeneth says, because it’s the part of campus most closely tied to the use of slave labor.

The installation of the new markers shouldn’t be seen as an end in itself, says Dozier: “It’s a step toward complete ownership of who we are as a university. We have been inspired by our students to be more thoughtful about how we tell the history of the university and of the state in more complete ways. This is an attempt to do that; the plaques represent the beginning of how we contextualize our past.”