2017 was a banner year for Carolina in the classroom, in research and in athletics

From winning the national championship in women’s basketball to unveiling a statue of the Cocky mascot and opening our new School of Law, 2017 was a great year to be part of Gamecock Nation. Take a look back at some of our top moments with our A to Z year-in-review video.

Below, we highlight 12 of the happenings that made 2017 such a special year on campus. 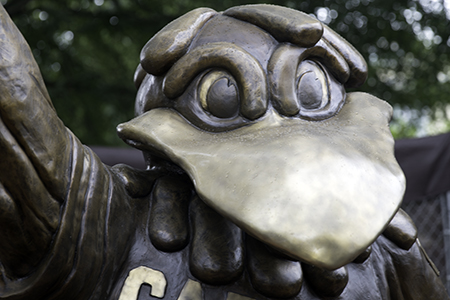 Cocky has been a towering figure on campus for years, but this fall the university's biggest cheerleader finally took a seat, literally — on a bench in front of Davis College, which is home of the School of Library and Information Science. That’s right, we’re talking about the new Cocky statue. The 6-foot-5, 773-pound bronze likeness of the University of South Carolina’s beloved mascot, which was unveiled in September, was sculpted by Carolina alumnus Robert Allison and paid for with private funds. It quickly became a must-visit selfie spot for Gamecock fans and is sure to become a popular place for students to return to.

On Aug. 21, the Columbia campus became a front-row seat to American’s first coast-to-coast total solar eclipse since 1918 — and it was worth the wait. Thousands of visitors joined students, faculty and staff to enjoy the show and participate in planned activities at eclipse stations across campus. University researchers also got in on the action, examining the effects of the eclipse on animals, the atmosphere and more.

This year’s freshman class — 5,874 strong — was the university’s largest ever, thanks in part to a spike in admissions acceptances following Carolina’s historic run in the NCAA men’s and women’s basketball tournaments. To accommodate everyone, the university added about 100 class sessions, hired more faculty and struck deals with nearby apartment complexes to provide student-style housing. The record-setting class brought impressive academic achievements with them, boasting an average SAT score of 1254 and an average ACT of 27.3. We also welcomed 579 students to the Honors College and 1,105 new Capstone Scholars.

Just what the doctor ordered 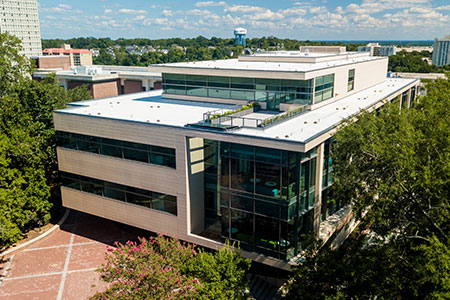 The new Center for Health and Well-Being — which replaces the 45-year-old Thomson Student Health Center next door — is not your grandfather’s student infirmary. With its lush plants, walls of windows and comfy seating, this could actually become a cool place place for students to hang out while soaking up positive vibes. Staff see as many as 500 students per day during peak times in the fall and spring semesters, so the building’s extra space — it’s 68,000 square feet — is much needed, especially with this year’s record freshman class.

K is for Kingston

New head baseball coach Mark Kingston got his first taste of the postseason as an infielder with the University of North Carolina, helping the Tar Heels take the ACC title and earn a berth in the College World Series in 1989. Kinsgton comes to Carolina from the University of South Florida, where he compiled a record of 100-78-1 over a three-year stint. His career record as a head coach — including five seasons at Illinois State — is 253-180-1. As a head coach, he has led teams to the NCAA tournament three times in eight years. The new Gamecock manager has also served as an assistant coach at Purdue, Tulane and the University of Miami, helping guide the latter to a College World Series title in 2001. “The long-term vision is to get to Omaha, to win another championship for this great university,” he told @UofSC in August. “I’ve been there as a player, as an assistant coach and as an associate head coach. The last part of the cycle would be to go as a head coach.” 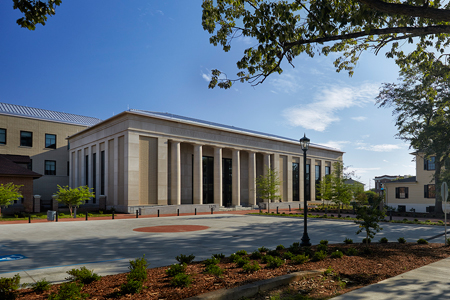 In 2017, the School of Law opened its new building, marked its 150th anniversary — and unveiled a stunning glass sculpture to boot. Anchoring Columbia’s downtown legal corridor, the 187,500-square-foot building on Senate Street is both a tribute to law school’s rich history and a state-of-the-art education facility. Courtrooms, office suites and a two-story reading room are named after prominent alumni who left their mark on the law, while classroom and study spaces were designed with an eye toward contemporary teaching methods. The sparkling glass sculpture in the Senate Street lobby, meanwhile, was designed by the studio of renowned artist Dale Chihuly and given to the university by an anonymous donor. 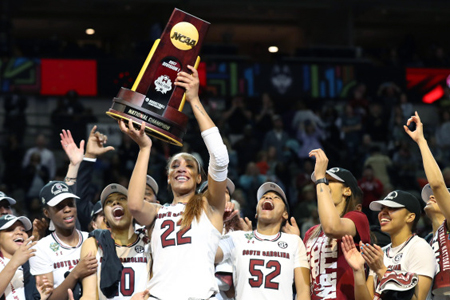 March is always an exciting time of year on the University of South Carolina campus. The spring semester is in full swing, the weather starts to warm, trees begin to leaf and buds begin to pop. March of 2017 was especially exciting, as the USC men’s and women’s basketball teams were tearing through the first rounds of the NCAA tournament, then the Sweet 16 and then the Final Four. The men advanced to the semifinals, while the women drove all the way to the basket, notching the program's first-ever national championship.

National Principal of the Year

Akil Ross was named S.C. Principal of the Year last year, but it turns out the Chapin High School principal deserved even more accolades. In October — who earned master’s and doctoral degrees from USC’s College of Education — was named 2018 National Principal of the Year. “While at Carolina, I came to realize that educators art artists with purpose and mission in our work,” he said. “Our students bring their experiences, both good and bad, to the classroom. We must find a way to help them prepare for the world.” 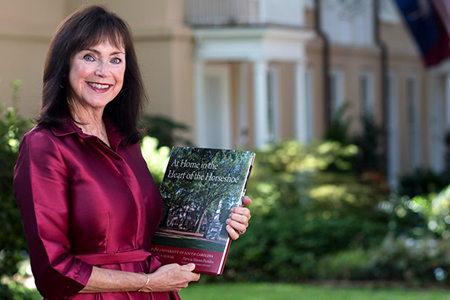 Carolina’s first lady, Patricia Moore-Pastides, has never been shy about her affection for the 19th century President’s House, which she and President Harris Pastides have called home since 2008. That affection, as well as her curiosity about history, shine through in her new book, “At Home in the Heart of the Horseshoe: Life in the University of South Carolina President’s House.” Published last fall by USC Press, the book is a trip down memory lane, complete with historic photos, anecdotes about previous university presidents and their families, and details about the house’s antiques and artwork. Recipes and novel flower arrangement ideas round out the volume.

Carolina programs consistently fare well in the U.S. News & World Report rankings — both our undergraduate and graduate international business programs came out on top again in the 2018 edition — but this year we also earned some additional bragging rights. For example, Carolina placed No. 25 among flagship universities and was named a Best Value School by the go-to rankings publication. We ranked No. 46 in the nation among public universities. This was also a banner year for our system campuses, with USC Aiken being ranked No. 1 in the Top Public Schools category (regional colleges, South). USC Upstate came in at No. 2 and USC Beaufort came in at No. 7 in the same category.

S is for Siemens

In June, technology and manufacturing giant Siemens donated hardware and software worth more than $628 million to the College of Engineering and Computing and the McNair Center for Aerospace Innovation and Research. The McNair Center, which features robotics and machine handling capabilities similar to what is found on production lines in commercial aerospace companies, will use Siemens hardware and software for student research projects. The donation will also help USC create a first-of-its-kind, university-based “digital factory.” President Pastides said, “This partnership with Siemens will position the university among the top universities in the nation for advanced manufacturing education and research."

In 2017, people recognized our achievements from miles around — every time the top of Capstone switched from gold to garnet. The new tradition, which began at the tail end of 2016, sparked plenty of conversation this year, and not just on social media. People in the real world were also curious why we were blushing with pride. The top of the iconic tower went garnet nearly 30 times, recognizing athletic achievements, faculty accomplishments, student scholarship and, in November, the announcement that alumnus Akil Ross had been named National Principal of the Year. Not surprisingly, the crown stayed lit pretty much straight through March, as the men’s and women’s basketball teams busted into the brackets in the NCAA tournaments, and the glow returned several nights in November as the women’s soccer team charged into the Final Four.

Thank you for celebrating 2017’s special moments with us. We look forward to much more excitement in the new year.