Helping the dogs of Chernobyl 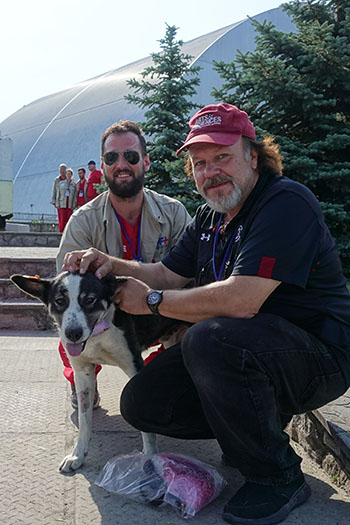 Tim Mousseau (right) recently started a project to investigate impact of radiation on the stray dogs living around the Chernobyl power plant in Ukraine. He is working with a nonprofit organization that sends volunteer veterinarians to administer vaccinations and spay and neuter the animals.

For almost 20 years, biology professor Timothy Mousseau has investigated the effects of nuclear disaster radiation on birds and bugs.

Now his attention is turning to man’s best friend. This summer, Mousseau and his students will visit Ukraine to study the stray dogs living around Chernobyl, the site of one of the world’s worst nuclear disasters.

More than 250 stray dogs roam the area around the Chernobyl power plant, and hundreds more live in Chernobyl City and travel throughout the exclusion zone — an 18-mile radius around the plant.

The dogs are descendants of pets left behind when surrounding villages were evacuated after the nuclear disaster in April 1986. The canine population has boomed in recent years, especially after Ukraine opened the area up to tourists in 2011.

“These dogs provide an analogous model for the human population not only because they have a similar biology, but they face the same stressors,” Mousseau says. “Even though, for the most part, radioactivity is the smallest component of their environmental stress load, poverty, nutrition and their effects on health are the same issues facing the people of Ukraine.”

Nonprofit organization Clean Futures Fund launched a three-year project to help the animals by bringing volunteer veterinarians to the area to administer rabies shots, spay and neuter the dogs and provide care. A colleague who knew about Mousseau’s previous research at Chernobyl approached him about the dog project with the idea that scientific research could be done alongside the medical work.

Mousseau spent two weeks with a veterinary team in August 2017 collecting blood and saliva samples and placing dosimeters — devices that measures exposure to radiation — on the dogs.

In June, he and five University of South Carolina students will travel to Ukraine to assist the volunteer veterinary team, collect more data and follow up on the previous year’s efforts. 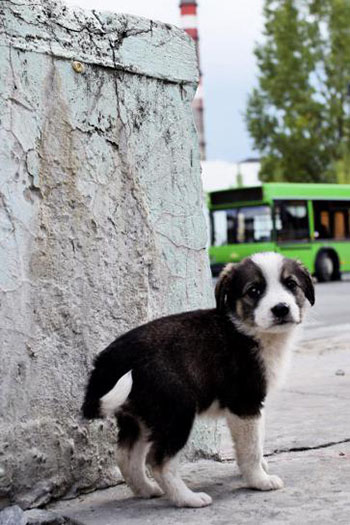 This puppy is one among hundreds of stray dogs that live and roam throughout the area near the Chernobyl power plant. They are descendants of pets of people who were evacuated after the nuclear disaster in 1986.

“This is really a once-in-a-lifetime opportunity to do this kind of study so we really want to gather as much tissue and information as possible,” Mousseau explained to the students in a recent trip planning meeting. “We are asking how did the radiation interact with the dogs’ health? Did the spaying and neutering impact the lifespan of the dogs? If you have research questions, this provides a great opportunity to develop projects.”

Aspiring veterinarian Courtney Rulison, a junior biology major and chemistry minor in the College of Arts and Sciences, looks forward to learning more about the impact of radiation on Chernobyl’s dog population and contributing to improving their overall welfare. She previously volunteered at Pawmetto Lifeline’s spay and neuter clinic in Columbia and shadowed a veterinarian. The upcoming research experience in Chernobyl will open doors to further scientific opportunity.

“Professor Mousseau is doing very extraordinary research in a part of the world that very few people are able to visit and experience,” she says. “I would not have had this opportunity anywhere else. It is very exciting that I have this privilege going into my senior year.”

South Carolina Honors College sophomore Jordan Chertok views the Chernobyl research as a way to diversify her experience in veterinary medicine and make a difference. She has assisted in local veterinary practices for more than a year and will put her skills to work in the Chernobyl clinics.

“This population of dogs was, until last year, very underserved, as a lot of people didn’t know it existed,” says Chertok, who is majoring in biology with minors in chemistry and psychology. “Because these animals were and are in need of medical care, and not a lot of people are so eager to venture to Chernobyl, I wanted to help in any way I could.”

The College of Arts and Sciences offers undergraduate research opportunities so students can apply what they’ve learned from Carolina’s outstanding faculty in a variety of real-world settings. These student experiences empower our future leaders to make a difference and excel in the global economy. Give to the university's dogs of Chernobyl research initiative.