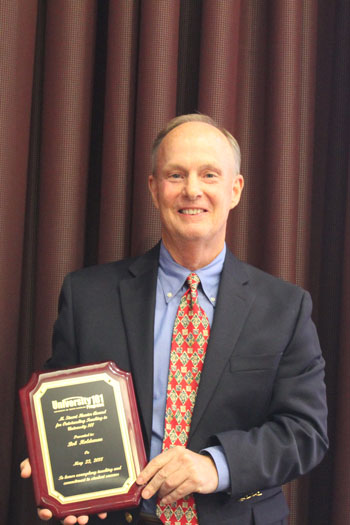 Bob Holdeman with the M. Stuart Hunter Award for Outstanding Teaching in University 101.

Bob Holdeman makes it a priority to form bonds with his students, a practice that helped earn him the 2018 M. Stuart Hunter Award for Outstanding Teaching in University 101.

“I’ve done it for so many years that I really do it for the same reason that I started it: It’s to have a little connection with the students, what they do, where they are, how they think a little bit,” Holdeman says.

When he first started at the University of South Carolina, he was in the department of student affairs, which was more of a management job than a teaching one, and he missed the interaction with students he once had. Later, a spot opened up to teach in the University 101 program and he jumped at the chance.

Over his 30 years of teaching, which started in a Bates House classroom in 1988, Holdeman has garnered praise from his students, including “Bob is all powerful” and “Bob has no weaknesses” written on evaluations from students.

The accolades and awards are welcome, but Holdeman says the real reason he is in education is to build relationships with his students.

“Bob added so much to my first semester of college,” says former student Cara Klich. “He was so welcoming and made the transition from high school to college so much easier.”

Holdeman relates to his students because he remembers what it was like to be in their shoes when he first came to Carolina as a student in the ‘70s. He describes himself as a frightened freshman filled with self-doubt and in a state of confusion much like his students today.

He understands that college can difficult for students adapting to different class sizes and teaching styles. He tries to get and keep students' attention with in-class activities and discussion. He helps them make connections with each other while learning about the university.

“Bob made the material we learned in class fun and engaging and I can honestly say I learned so much about things like the history of our school, the resources available to me throughout campus, the best study tactics and much more,” student Katherine Moran says.