The University of South Carolina is home to a lot of creative people — and not only in the arts.

In addition to his role as associate professor and director of music entrepreneurship at the School of Music, Cutler has been tasked by the Office of the Provost with overseeing a yearlong, university-wide effort to promote innovation and embolden the creative spirit at every level of the campus community.

In the process, Cutler is also highlighting what’s already here, bringing USC’s creative class on board one member at a time.

The initiative, dubbed USCreativity, kicked off in May with the Great Gamecock Design Challenge. The weeklong competition brought together 10 teams composed of faculty, staff and students to reimagine an old Coast Guard bus for a new life as an innovative mobile outreach space.

USCreativity will continue with additional events throughout the 2018-19 academic year. “While most of us surround ourselves with others who look and think a lot like we do, innovation is more likely when we work across disciplines to solve problems,” says Cutler. “The design challenge was a different kind of experience for participants. At each phase, the purpose of the bus is to facilitate conversations that wouldn’t otherwise happen, bringing together communities that wouldn’t otherwise meet, to address important challenges or opportunities facing our state.” 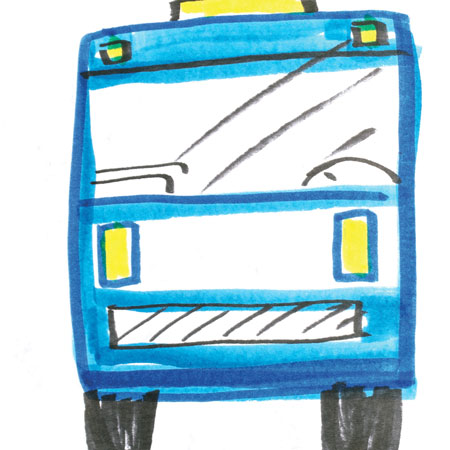 USCreativity kicked off in May with the Great Gamecock Design Challenge — a weeklong competition to reimagine an old Coast Guard bus for a new life as an innovative mobile outreach space.

On the final day of the Great Gamecock Design Challenge, when the judges selected the Creative Coop as the winner, faculty facilitators Tony Dillon, Christy Friend and Sharon Verba were visibly psyched, and why not? The announcement capped a full week of training, orchestrated brainstorming, focus group interviews, consultant meetings and a three-minute Shark Tank-style pitch in front of a live audience.

“There were some serious moments where we thought, ‘We’re not going to get this finished!’” says Friend, professor of English. “In that way it was exciting but also very intense. It was that kind of experience where you have to be on top of your game every single moment because there’s not a moment to lose.”

In the end, the hard work paid off in a proposal that featured video screens on the sides of the bus, a stage on its roof and a production studio inside. Per design challenge rules, the proposal was inspired by the hypothetical needs of a persona — for this team, a new tenure-track professor — but ultimately the bus needed to be something usable by different stakeholders from across the university community and beyond.

As an example of how it could be used, team members suggested that study abroad students could give live presentations about their experiences overseas to audiences on campus or around the state. A speaker or emcee might address an audience from the roof.

“What made it tricky was the bigger charge to make this bus idea something that would appeal to all stakeholder groups,” says Friend. “The persona was just the starting point.”

Of course, the winning team members admit that the entire design challenge was a starting point — and not just for the bus. The process inspired Friend to think about redesigning the conference room outside her office. It inspired Verba, head of research and instruction for Thomas Cooper Library, to consider new possibilities for the redesign of computer classrooms at Thomas Cooper.

“The bus in itself is a project, but what if you can create a culture where we think of different things as projects, and not necessarily just classrooms?” Verba posits. “What if we redesign the way we do a program or the curriculum, and we use some of these same approaches? We now have 30 trained facilitators. Go from there and add some more. Start with some little projects, then do some bigger projects.”

Friend is equally excited about the prospects for future collaboration.

“It was such a great reminder to me of how much I have to learn from all of my colleagues at the university, people I would never otherwise have crossed paths with,” says Friend. “To be able to learn from watching Tony manage a project or how Sharon keeps everything on track was really a gift.”

And the Creative Coop itself? The proposed external video screens might not be street legal, according to engineers, but that obstacle is just another design challenge waiting to happen. Dillon is already working with his colleagues in the College of Engineering and Computer Science to firm up a realizable plan going forward.

“At the end, they said let’s look at all the ideas and take what’s good from each of them,” says Dillon, internship director for integrated information technology at the College of Engineering and Computing. “We’re now creating a bus for all of the stakeholders. The Judges’ Choice and People’s Choice are the primary ones, but we’re incorporating elements from the other eight as well.”

The people’s choice award went to Studio 1801, a bus design that would draw inspiration from the university’s history (thus the name, inspired by the date of USC’s charter) but also look to the future. The facilitators in this case were English professor Ed Madden, business professor Hildy Teegen and nursing assistant professor Tisha Felder, though as with every team, the faculty members were joined by six teammates representing staff and students.

And apart from the name, what set Studio 1801 apart from the competition? Among other proposed features, a geodesic dome dubbed “the Pavilion of Possibilities” and customizable “pods” that can be kitted out for different functions depending on how the bus is to be used on a given day.

While most of us surround ourselves with others who look and think a lot like we do, innovation is more likely when we work across disciplines to solve problems.

“The idea was to create a studio space where different things could happen, whether it be a speaker or a group coming together to discuss an important issue,” says Madden. “Our design was more about creating a functional space for use away from the university, for outreach to and through alumni.”

The focus on alumni wasn’t arbitrary. Rather, it derived from the hypothetical needs of the team’s assigned persona (a fictional law school alumna named Donna) and the perspective offered by the very real alumni who served as the team’s focus group.

But the vision itself derived from the process, which brought together people of different ages, from different disciplines, at different phases of their lives.

“We all have the potential to be creative, it just comes out in different ways,” says Felder. “These types of processes help us see that. People can be intimidated — ‘Well, I don’t sing, I don’t dance’ — but there are so many ways to be creative.”

During the design challenge, however, creativity was channeled in very specific ways. Among other things, participants were expected at different points to wear pairs of color-coded paper eyeglasses, with different colored glasses representing different feedback roles. Blue, for example, was for “boost,” meaning that the person wearing blue glasses was only supposed to offer encouragement at that moment. Red glasses allowed the same team member to be critical.

“As faculty, we just don’t do things that way,” says Felder. “So people might think, ‘Is this a waste of time? Couldn’t we reach the same result doing things the way we have always done them?’ I would say no.”

Teegen agrees and says there was a method to Cutler’s madness. She calls the process “enjoyable but not play.”

“The idea was to be very systematic with the engagement feedback we were providing each other,” she explains. “For me, at least, it gave me greater license to provide feedback that I might have been more reticent to give on the negative side. That was a very helpful new process point that I could see applying in any classroom.”

Unlike most participants, Teegen had done some training in design thinking previously and had even taught a pilot course through the Honors College that was based on similar principles, but she says the Great Gamecock Design Challenge was different.

“I wasn’t coming in cold, but David and his colleagues did a really great job in terms of introducing the concept compared to what I had done before,” Teegen says. “I learned a ton, and part of that was because we were collaborating across disciplines. One of the appeals for me was using this as a mechanism for identifying members of the campus community with whom I can share ideas.” 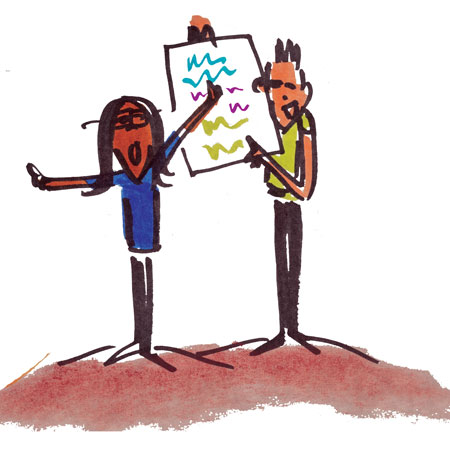 “I learned a ton, and part of that was because we were collaborating across disciplines. One of the appeals for me was using this as a mechanism for identifying members of the campus community with whom I can share ideas.” — business professor Hildy Teegen

Cutler has laid out several phases for the project going forward. This year, engineering and art students are working to redesign and repurpose the space. Communications students will capture much of the work on video. Later, a follow-up design challenge to determine how the bus should be used to serve the university and the state.

“The goal is to elevate creative capacity across the university and the state, while addressing critical challenges facing our community.”

Whatever shape the bus ultimately assumes — whatever

its ultimate purpose — the project is already a success, as Cutler sees it, because conversations are already happening across campus. And that all started in May with creative people from across the Columbia campus all wrestling with a single problem.

“It’s amazing what happens when a diverse group of 150 people are unified around a single creative problem. We had participation from every college across campus,” Cutler says. “I don’t know that that’s ever happened for a voluntary event with faculty, staff, graduate students and undergraduate students. By every metric we were delighted.”

The bus is also just one aspect of USCreativity, which will announce more events as the year progresses, and which reflects the same philosophy as other campus projects, including this year’s First-Year Reading Experience book, “A More Beautiful Question,” by Warren Berger, and October’s sold-out TEDxUofSC event, which was likewise built around the theme of creativity.

Throughout the 2018-19 academic year, the University of South Carolina is showcasing creative thinking and innovative problem-solving, from the arts to groundbreaking scientific research.

Share your own story of creativity and learn more about the USCreativity initiative.