As a Carnegie Foundation top-tier research institution, the University of South Carolina attracts talent from around the globe. But it’s not just our reputation that draws researchers to the Palmetto State. The university’s location provides unique opportunities for scholarship and collaboration. Our series of stories about research that can only be done here originally ran in USC Times this fall.

As he conducted research for Columbia SC 63, a project that commemorated the 50th anniversary of the height of the American civil rights movement, history professor Bobby Donaldson started discovering largely untold stories about the struggle as it played out in Columbia. 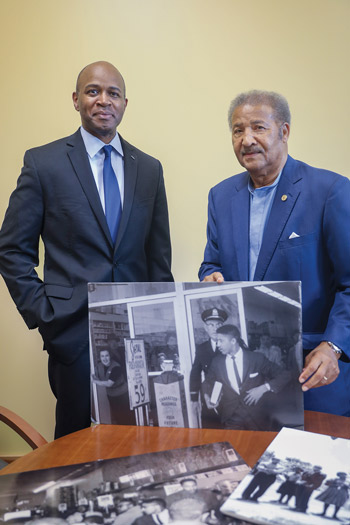 Among the people history professor Bobby Donaldson has interviewed for the Center for Civil Rights History and Research is the  Rev. Simon Bouie. As a 20-year-old student in 1960, Bouie led a sit-in at the Eckerd's drug store on Columbia's Main Street.

The material he and his students unearthed and the people he met helped guide the formation of the South Carolina Center for Civil Rights History and Research, now housed at USC’s Ernest F. Hollings Library. The center is dedicated to documenting South Carolina’s civil rights story, and was founded in November 2015 with the receipt of the congressional papers of Rep. James E. Clyburn, the state’s first African-American member of Congress since Reconstruction.

“One of the things that makes the state a great classroom or laboratory is that many of the people who were young leaders and activists in the 1950s and 60s are still with us,” says Donaldson, the center’s director and an associate professor in the College of Arts and Sciences. “In the past three years, we’ve been able to travel the state to visit sites where events occurred to provide some contextual basis for our research.  Additionally, we’ve been able to talk to people, record interviews and add these reflections to our oral history collection.”

Among the people Donaldson has interviewed is Simon Bouie. As a 20-year-old Allen University student in 1960, Bouie led a sit-in at the Eckerd’s drug store on Columbia’s Main Street and was arrested and convicted of trespassing, a typical charge for African-Americans who attempted to be served at lunch counters in the 1960s. His appeal was argued by attorney Matthew J. Perry, who later became the first African-American U.S. district judge in South Carolina. The U.S. Supreme Court overturned Bouie’s conviction in what became a landmark ruling that was later used in other sit-in cases around the country.

The center’s collection includes a copy of Bouie’s trial transcript and a photo of a previously unknown student at a local sit-in that has now been identified as Bouie. Bouie has also been identified in a 30-second film clip housed at USC’s Moving Image Research Collection that shows the arrest of two young men in downtown Columbia. The original film canister identified Bouie simply as “Negro demonstrator.”

Bouie, who attended Booker T. Washington School before enrolling at Allen, moved home to Columbia a couple years ago and has been shown the film footage. He has also been interviewed by Donaldson and his students.

“Our location in the center of the state and in the heart of downtown Columbia has expanded my teaching and research efforts,” Donaldson says. “We have a great partnership with the Booker T. Washington Foundation, and our students have opportunities to conduct or listen to first-hand interview accounts.”

The collections also include documents that show the strategy used by the Freedom Riders, who traveled across the South in 1961; photos of marches and protests in downtown Columbia; and interviews with key players in the civil rights struggle in South Carolina. The center and the library will showcase  some of that material in a major exhibit next spring.

“Within the Caroliniana and the Hollings Library, there are boxes of materials about the state’s history. In those boxes there’s a wealth of information on civil rights, much of which I did not know,” Donaldson says.

“Through the research that we’re doing and with the students in classes, we have more eyes and hands on this material. We’re able to expand our study and documentation of what occurred in South Carolina during the past century.”