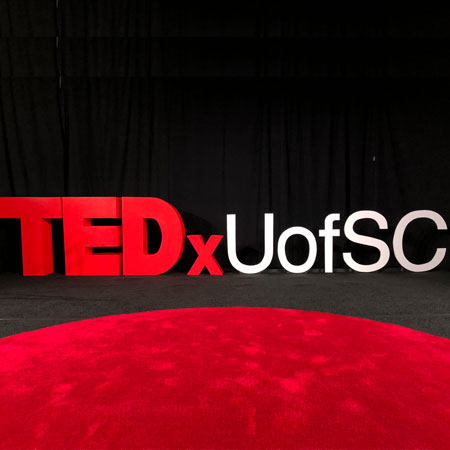 Overcoming stereotypes and drug addiction, learning to listen in uncomfortable conversations about race, and finding new ways to diagnose and treat mental illnesses were just some of the wide range of topics presented by speakers at the inaugural TEDxUofSC event Tuesday.

The event, a locally organized version of the TED organization that is committed to ideas worth spreading, brought together scientists, entrepreneurs, students and performers, all sharing their ideas for a better world.

“How do we bring about connection when our world seems to be so divided?” University of South Carolina Ph.D. candidate Kassy Alia asked at the beginning of her talk. “I believe the answer lies in empathy and finding the courage for collaboration.”

Alia shared the story with the audience about her husband, Greg, a police officer who was shot and killed in the line of duty. In the days after his death, Alia looked for ways to share that police officers are often the good guys, not always the bad apples that seem to get the most media attention.

She says that effort led her to learn to listen to people whose experiences with the police were vastly different from her own.

“I learned what it felt like to lean into what was uncomfortable for me to hear, to listen deeply and openly, and I learned that change was less about being understood but in seeking to understand.”

Learning to have those difficult discussions around race relations fueled the presentation of junior Lyric Swinton, who is majoring in sport and entertainment management.

Swinton talked about being an advocate for inclusion and equity in Student Government.

“There was always a little voice inside my head that created doubt, wondering if I was there because I was valued or was I there because diversity and inclusion were good buzzwords and my face fit the bill,” she said.

The two were among a dozen speakers and additional performers who shared their personal stories or creative takes on finding solutions to inform and inspire the audience.

Restaurateur Sarah Simmons talked about her efforts to remake her company, City Grit, into one that focuses more on the community than on profit, supporting local farmers and training non-college-bound young people for careers in the restaurant industry.

"All it cost us was a little extra time and a lot of innovative thinking," Simmons said of the transformation.

Shigeharu Kobayashi talked about how he always asks potential employees at his family’s Camon Japanese Restaurant and Sushi Bar to describe for him how they brush their teeth.

“If you’re working in a restaurant, you have to take some ownership of your station, are your tools clean and easy to reach, do you work mindfully? … Do you work well as a team? Are you able to share your space?” said Kobayashi, who has also served as program director at Tapp’s Arts Center in downtown Columbia. “A lot of that gets mirrored in brushing your teeth.”

“One in five Americans is prescribed antidepressants — that’s a phenomenal number of people,” the biochemistry professor said. “And antidepressants don’t work for the majority of patients who take them. And, the research community has lost interest in recent years in developing better and more improved antidepressant therapies.”

Hashemi’s lab discovered a correlation between serotonin levels and histamine levels in mice that were not helped by the most commonly prescribed antidepressant medications. Her team found that lowering histamine levels improved serotonin levels and reduced symptoms of depression. But their work also is looking at ways to actually measure levels of serotonin and histamine in an individual’s brain and prescribe medicines accordingly, something that cannot currently be done.

“For the first time, we have this idea of taking something peripheral — outside of the brain — to give us information about the brain; no need to open up your brain and stick a probe in there,” she said.

David Cutler, associate professor of musical entrepreneurship, capped off the inaugural TEDxUofSC event with a call for embracing creativity — which, he said, means challenging the status quo. To prove his point, he then conducted a nine-piece musical ensemble in a reimagined rendition of Tchaikovsky's famous Violin Concerto in D Major, which found the Romantic-era masterwork re-envisioned as a piece that ranged from classical to rock 'n' roll to swing-era and avant-garde jazz.

Throughout the 2018-19 academic year, the University of South Carolina is showcasing creative thinking and innovative problem-solving, from the arts to groundbreaking scientific research.

Share your own story of creativity and learn more about the USCreativity initiative.