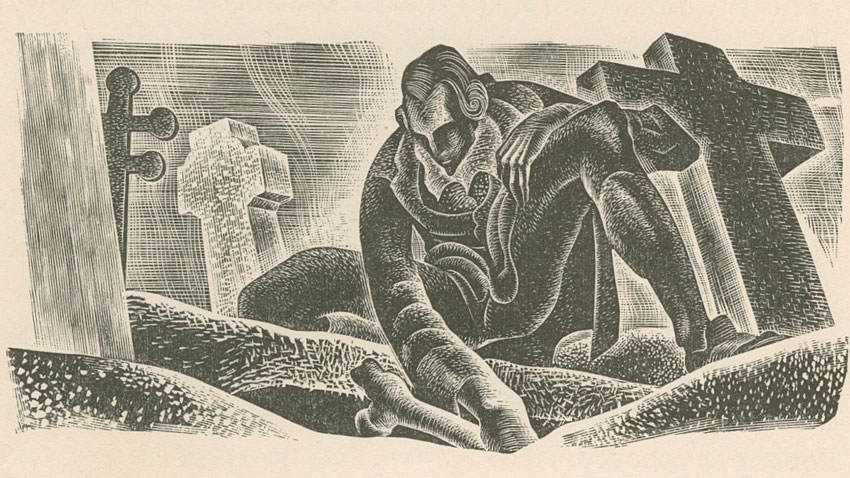 The desire of a young mother to revive a lost child and the longing of a motherless child for connection with a distant father are the foundation of one of the most iconic science fiction novels ever written. The book was published two centuries ago and was written by a teenage girl as part of a ghost story writing contest with her summer housemates, including her partner and one of the better-known writers of the day.

“Frankenstein,” Mary Shelley’s tale of a scientist pushing the boundaries of knowledge and ethics to reanimate lifeless flesh, turns 200 this year, and the University of South Carolina is celebrating the anniversary by reaching into its rare books collection and tapping faculty expertise to tell the story of Mary Shelley, Victor Frankenstein and the creature that has spawned many reincarnations throughout popular literature, film and television.

Curated by Jeanne Britton with the Irvin Department of Rare Books and Special Collections, the special Frankenstein exhibit offers insight into not only the novel, its author and its historical background, but also issues still relevant today, including the origin of life, what it means to be human and the ethics of revolutionary science.

“Through the novel, Mary Shelley is at least in part exploring the nature of responsibility in science,” says George Khushf, philosophy professor and director of the Center for Bioethics at Carolina. “For this reason, the novel has been of interest, and enduring interest, in exploring the ethics of science, especially the more visionary, wilder kinds of science on the cutting edge.”

The exhibit includes books on science that are 400 years old as well as a first edition of the 1818 novel that started it all and the 1831 edition that historically has been the most widely read version. Other items include novels and collections of poetry by Shelley’s contemporaries as well as comic books and pop culture references to Frankenstein’s monster through the ages.

“There were only 500 copies of the first edition. It’s amazing that we have that,” Britton says. “By the time of the second edition, people knew that Mary Shelley had authored the text, her name appeared on that edition. We also have the edition revised by Mary Shelley, which is technically the third edition of 1831.” 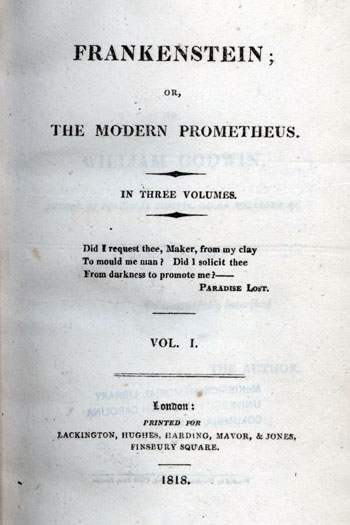 The front page of the original 1818 version of Mary Shelley's "Frankenstein," which did not reveal her authorship.

Shelley referred to the revisions in the 1831 edition as “slight modifications” and “minor corrections.” But the differences are more significant than that, while still not changing the overall story, Britton says.

One big difference is that in the first edition, Victor Frankenstein is raised with his biological cousin whom he intends to marry.

“For undergrads today, that requires some explanation,” Britton says.

In the revised edition, he’s raised with the same character, the name is the same, but her background is different. She is a European orphan adopted by Frankenstein’s family.

“He’s raised with her and thinks of her as his adopted cousin and intends to marry her,” Britton says. “The significance of that change is vast, because we have a different understanding of a family. What does that say for the monster, who is not a biological relative of Victor Frankenstein, who is different from everyone else, but wants desperately to have a family.”

Those revisions are the focus of a panel discussion Nov. 2 that is part of the university’s series of events related to the novel’s 200th anniversary.

“My feeling is that the 1818 edition, which is the one I usually teach in undergraduate classes and students really love, doesn’t give any clear motive for why Victor abandons his creature,” says English professor Tony Jarrells, who will be a part of the panel discussion. “Victor sees his runny, yellow eyes and says, ‘It’s not beautiful,’ and runs away, setting in motion the creature being on its own in the world, trying to figure out language and relationships, and wondering where is his parent, his creator?

“The 1818 novel is wonderfully ambiguous. The 1831 edition, at least as I have read it, seems to try to make Victor a little better than he is.” 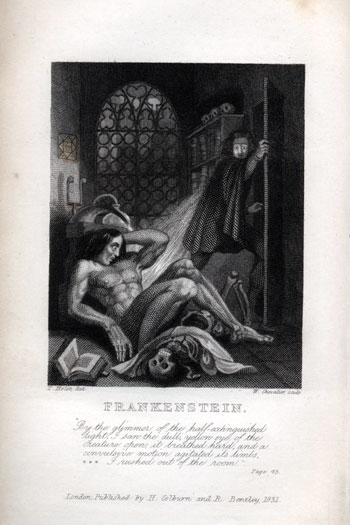 By the 1831 revised edition, Mary Shelley was widely known to be the author of the very popular novel and she made the revisions herself.

Paula Feldman, a renowned scholar of Mary Shelley and the Romantic era and the C. Wallace Martin Professor of English at Carolina, gives a talk Oct. 24 on the author and how Shelley’s life informed the novel.

“I was in grad school and I was taking a seminar on the poet Percy Bysshe Shelley,” Feldman says. “We read this novel by his wife — and that was how it was presented — we were only reading this because it was the context for his poetry.

“At that time — this was 1972, I think — ‘Frankenstein’ was not part of the academic curriculum at all. It wasn’t taken seriously as literature. Anyway, I read this novel, which was presented at the time as, ‘This is about the poet Percy Bysshe Shelley.’ I read it, and I thought, ‘No, it’s not.’”

Feldman decided to do some research and write a paper about Mary Shelley and her novel “Frankenstein,” making the argument that the novel was more autobiographical than about the poet Percy Bysshe Shelley.

“That summer, I went to England. It wasn’t a research trip, but I did stop at the Bodleian Library at Oxford and poke around for a while. They had just deposited there, in 10 grocery bags, the Abinger collection of Shelley materials. I thought, ‘I really ought to look at that.’

“Amongst all these uncatalogued papers, I found Mary Shelley’s private journal, her own handwriting, drawings, doodles.”

Feldman says the journals she saw had more material than a journal she had read that was published in the 1940s.

“I thought, ‘Wow! There’s all this good stuff here that nobody’s read before.’ ”

Feldman eventually edited a two-volume groundbreaking edition of “The Journals of Mary Shelley,” published by Oxford University Press in 1987.

It is those journals that give a fuller understanding of the author and perhaps of the origin of the Frankenstein story itself.

“I have a lot of fun talking to my students about the novel. It’s not frightening, not a horror story, in the conventional sense,” Feldman says. “The more you know about Mary Shelley’s life and the materials she was working with, the more horrifying it becomes, starting with a 19-year-old saying, ‘To understand the causes of life, we must first have recourse to death.’ ”

Shelley was surrounded by death, starting with her mother shortly after Mary was born, followed by the deaths of three children, the suicides of her husband’s first wife and Mary’s half-sister, and later her husband’s death just shy of his 30th birthday.

“Mary Shelley felt guilty about her mother’s death. She grew up, like her creature, like Victor Frankenstein, motherless,” Feldman says.

Mary Shelley was just a teenager when she eloped with the already married Percy Bysshe Shelley and lost a child of her own shortly after giving birth. It was the suicide of Percy Bysshe Shelley’s first wife, Harriett, that enabled him to marry Mary Godwin.

“She blamed herself, and it all comes out in the novel, as Victor sees everyone around him dying and feeling responsible for it,” Feldman says.

It is that tapping into truth that perhaps explains how a first-time, teenage writer was able to capture the imagination of the reading public and create such an iconic creature.

“The novel works in a powerful, subliminal way,” Feldman says. “Part of what it’s about is our fear of rejection. Everyone wants to be accepted, and here’s this creature who’s good at heart, who does benevolent things for people, but because he looks different from others, he’s not only rejected but treated with violence.

University Libraries has a full lineup of events to celebrate the 200th anniversary of Mary Shelley's "Frankenstein." Visit the libraries' website for details.