Students reflect on professor emeritus who never stopped teaching them

From the start, Will Pearce’s career in corporate finance law has flourished. He’s had stopovers in New York and London and now works in the Bay Area of California, where he made partner in his firm.

But the 2002 Honors College graduate isn’t just a number-crunching lawyer. He focused on religion and philosophy at the University of South Carolina before earning a dual degree in religion and law at Emory. That underpinning proved vital when he underwent a radical brain tumor surgery in 2017 that few survive. Slowly recovering and reflecting on what life had dealt him, Pearce reached out to James Cutsinger, his favorite religious studies professor and mentor at UofSC.

“I shot him an email to let him know that in the decade or so since we last saw each other life had been hard, but I fought through with some of the inspiration he gave me in class,” Pearce says. “I wanted to let Dr. Cutsinger know that some of the things he had taught me years ago had helped me.”

It’s a familiar refrain in academia — former students reconnecting with professors — and it has replayed innumerable times for Cutsinger, who taught thousands of students over the course of 37 years. But this time was different. Pearce learned that Cutsinger had gone through his own struggles with serious illness, having recently retired following a diagnosis of stage IV lung cancer. Despite the grim news, Pearce found his professor, affectionately known by many as “The Gray-bearded Pilgrim,” to be as steady and resolute as ever.

What made the deepest impression right off the bat was how seriously he took his time with students in the classroom. It wasn’t something he took for granted.

“It wasn’t just being successful in the world that caused me to reach back out to him,” Pearce says. “His inspiration had kept me going in law school, and I got the great jobs I wanted because his inspiration pushed me ahead. He gave me the strength to fight through a brain tumor that was supposed to kill me. It’s an inspiration that has lasted more than 15 years beyond college.”

Not many professors inspire that kind of tribute. Some we forget and others are scarcely remembered. The taskmasters held us to high standards and perhaps earned respect for the knowledge they instilled. But inspiring? Only a select few reach that pedestal, even as they maintained lofty expectations and, through wit, charm, charisma or some other secret sauce, earned our enduring devotion.

Teaching religious studies undoubtedly contributed to some of Cutsinger’s deep connections with students as they tackled such heady topics as faith, suffering and the existence of God.

“People in that typical age range of 18 to 22 are often trying to figure out what in the world is going on, what the meaning of life is,” Cutsinger says. “I don’t think they get answers to those questions from most philosophy and religious studies professors, who are a little skittish about talking too much about Meaning with a capital 'M' in the classroom. 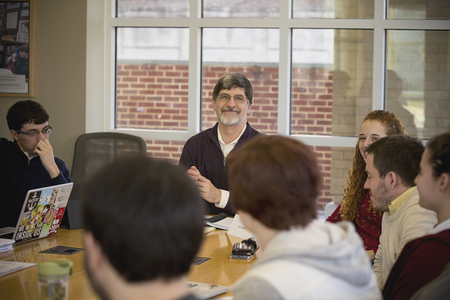 Employing the Socratic method in his teaching, James Cutsinger inspired students for 37 years as they tackled such heady topics as faith, suffering and the existence of God.

“I never did pussyfoot around and say, ‘Some people say this, and some people say that.’ I’m an absolutist, not a relativist. I would always say instead, ‘This is what I know or at least believe to be true.’ And it seems I was able to do that in a non-threatening, inviting way. Somehow, I was able to share the joy I have in big ideas, and people picked up on that.”

From the beginning of his career in 1980, when Cutsinger was a 27-year-old assistant professor, students started hanging out with him. With some, he mixed conversation and basketball, playing one-on-one on the courts around the corner from his office in Rutledge. Hoops sessions were less frequent as his knees got older, but the conversations were forever new, sometimes with whole groups of students gathering in his office after class.

Some sought him out well past graduation. Judy Lui, who earned bachelor’s and medical degrees in 1988 and 1992, respectively, took several courses with Cutsinger as an undergrad, the first of which “opened the door to another world I had never known before.” In medical school, her former professor became a sounding board as she wrestled with various ethical questions and moral dilemmas associated with her chosen field. “He helped me to think through death and the soul and the body — and that became part of my med school education.”

J. Bradley Studemeyer, a 2014 religious studies graduate who began law school at UofSC this fall, says Cutsinger never dodged students’ questions or tried to talk over their heads, but he was always trying to bring them to a broader view.

“The fact that he was able to take all religious traditions seriously, to take them at their word and try to understand why they believed it and whether it was worth believing yourself — there’s just something incredibly engaging about that that you don’t get in other disciplines,” he says.

Cutsinger’s personal faith lies unshakeably in Orthodox Christianity, with a strong leaning toward its mystical elements, but students of other faiths — Muslims, Buddhists, Hindus and generic spiritual seekers — joined the list of those who stayed in touch after graduation.

“In the university classroom, I always took a perennialist approach, the idea being that Truth with a capital 'T' has been expressed and re-expressed over time in a variety of spiritual dialects,” he says. “A common analogy I liked to use with college kids is that God is at the top of a mountain, while various world religions represent divergent starting points at the base, following different paths of ascent, but coming closer to each other as they approach the summit.”

Scott Murray, a 1994 Honors College graduate who took several of Cutsinger’s courses, says there was something ever deeper at work in those class sessions, a nearly palpable sense among the students that this professor wanted them to reach higher, push harder and excel.

“What made the deepest impression right off the bat was how seriously he took his time with students in the classroom. It wasn’t something he took for granted,” says Murray, who has worked abroad for years, most recently as a tonal wood buyer for guitar manufacturing in India.

Far more precious than any skills he helped impart, James made me realize the connection between ideas and life, between what one studied and how one lived, between knowledge and virtue.

“He took very seriously the students who were understanding the material and who obviously gravitated toward it. But he also took seriously the student who had an honest or perhaps an even less than honest objection to something that was being said. He responded with equal discipline of mind and attitude toward everyone. He would take an inordinate amount of time to help one student understand something that I suspected 90 percent of the others understood quite well.”

Jordan Bissell, one of Cutsinger’s graduate students from a decade ago, remembers getting back the first paper with his prof­essor’s edits. “It was marked with so much red ink that you could have mistaken it for a spilled bottle of ketchup,” says Bissell, now an academic adviser at Indiana Uni­versity. “And yet attached to it was nearly a page of typed commentary from Dr. C, encouraging me and also noting where my ideas were incoherent or underdeveloped.”

It’s true that Cutsinger made student writing a focus and didn’t hesitate to uncap his red pen. To cure their writing deficiencies — or at least reduce the severity of the most serious illnesses — he produced “A Breviary of English Usage,” a 15-page guide to clearer writing that he distributed at the beginning of every semester. But better writing wasn’t the only outcome of his efforts.

“Far more precious than any skills he helped impart, James made me realize the connection between ideas and life, between what one studied and how one lived, between knowledge and virtue,” says Wade Kolb, a 2000 history graduate.

While Cutsinger devoted himself to teaching in and out of the classroom — and was recognized with the university’s highest teaching awards — he poured himself into scholarship nearly every summer, writing and editing 14 books over the course of his career. “That was almost serendipity, really. I never had to go in search of a publisher; acquisition editors often came looking for the books,” he says. Senior stars in his field, like Huston Smith, became close friends and were generous in offering their support to a fledgling academic. Several of Cutsinger’s titles, including Advice to the Serious Seeker, explored the teachings of Frithjof Schuon, a 20th-century Swiss philosopher.

Eric Cox Merkt, one of Cutsinger’s first students in 1981 and now a senior lecturer at the American University of Iraq, was introduced by Cutsinger to Schuon and other authorities on traditional metaphysics and comparative mysticism. Those studies widened Merkt’s vision, and he ultimately forged a friendship of nearly 40 years with his former professor. “I never ‘lost’ anything in my studies with Professor Cutsinger, but I found the goodness of my insights confirmed and expanded, comprehended into something ‘more,’ something truer, more comprehensive, and consequently more beautiful,” he says.

As word of Cutsinger’s illness has spread, former students who haven’t been in touch in years have reconnected. Many traveled long distances to attend a retirement event in his honor last year in Aiken, South Carolina, trading good-natured quips about the professor who profoundly influenced so many.

“Through him, I came to understand that whatever conclusions one reaches regarding the riddle of life or who one is as a human have profound implications for how one acts in the world and how one treats others,” says Kolb, who graduated 19 years ago.

“James did not convey [this] in a clever lecture or a probing question or a comment in the margin of an essay. He conveyed it instead through the self-effacing gift of himself, given generously to generations of students who know him as a friend, and as the one who helped them find the light within themselves.”