100 years of suffrage: Reconstruction through ratification

SC women take up the fight for suffrage, equality

This is the second in a series of stories commemorating 100 years of women’s suffrage by examining the history of the women's movement in South Carolina and the role UofSC plays in documenting and preserving that history.

Following the Civil War, a new ruling class took over in South Carolina — albeit only for a dozen years under the protection of the federal government and U.S. military during the era known as Reconstruction. Among the leaders of the post-war government were former officers in the U.S. Army during the war — such as Robert Scott, a white man from Ohio, who was twice elected governor (1868-1872) — and William J. Whipper, one of the most influential Black politicians in South Carolina’s Reconstruction government.

Whipper’s wife, Frances Rollin, was the oldest of five Rollin sisters who took the capital city by storm, hosting well attended salons and even speaking to the state Legislature on women’s suffrage.

The Rollin sisters, starting with Frances in 1845, were born in Charleston to free parents of color. Their father was of French descent and owned a successful lumber business and insisted his daughters receive an education despite restrictions on Black education in South Carolina. The family was considered a part of the “colored aristocracy” that existed in antebellum Charleston. After the war, the sisters moved to Columbia and hosted politicians — Black and white — from the ruling Republican Party. These events were considered a bit scandalous in their day for the mixing of races at social events.

In March 1869, Charlotte Rollin spoke to the South Carolina Legislature in favor of voting rights for women: “We ask suffrage not as a favor, not as a privilege, but as a right based on the grounds that we are human beings and as such entitled to all human rights. While we concede that woman’s ennobling influence should be confined chiefly to the home and society, we claim that public opinion has had a tendency to limit woman’s sphere to too small a circle and until woman has the right of representation this will last, and other rights will be held by insecure tenure.”

I made history for at least 30 seconds.

“The first charter in South Carolina for the suffrage movement is 1871, and that is the Rollin sisters,” says Valinda Littlefield, professor of history and African American Studies at the University of South Carolina. “Charlotte Rollin gave a testimony urging the legislators to give women the right to vote in 1869.”

The effort had the support of the governor and lieutenant governor as well as many Republican politicians of the day and an amendment to the state constitution was proposed. The debate over women’s voting rights was fierce, including a fistfight in the Legislature, and was ultimately defeated.

“The other thing about that particular beginning of the suffrage movement in South Carolina — the Rollin sisters — it included Black and white,” Littlefield says. “But the shifts happen later, and you get the women’s movement moving on parallel tracks, but never together.”

When Reconstruction ended, the Rollin and Whipper families left South Carolina. William Whipper made a last-ditch effort to codify civil rights as a delegate to the South Carolina Constitutional Convention of 1895, but it failed, and South Carolina entered the era of Jim Crow, segregation and the continuation of violent assaults on Blacks by whites. 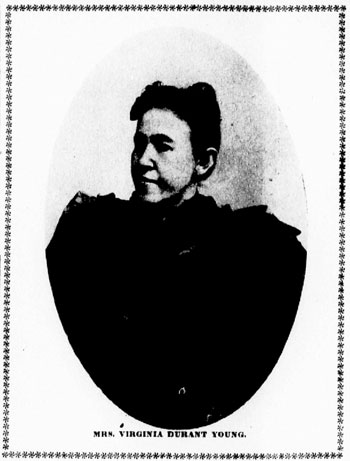 Photo of Virginia Durant Young as it appeared in the March 13, 1904 issue of State newspaper. Full page article is available from NewsBank: South Carolina Historical Newspapers.

The next women’s suffrage push in South Carolina came from Virginia Durant Young, a white journalist, author and activist.

Born in 1842 in Georgetown County, Young lost her mother at a young age and her close relationship with her father has been credited with her progressive ideas about the roles of men and women.

In 1858, she married, and in addition to her life as a wife and homemaker, she wrote short stories and a novel under various pen names. When her husband died in 1879 in Mississippi, she returned to South Carolina where she met and married Dr. William Jasper Young, a physician in Fairfax. They were married in 1880 and she began working with the Women's Christian Temperance Union in 1886. She used her literary skills to write letters to the editor, articles and a newspaper column in support of the temperance movement. Three years later she became part-owner of the Varnville Enterprise newspaper.

In 1890, Young and several like-minded women, established the South Carolina Equal Rights Association at a meeting in Greenville. She and her equal rights contemporaries lobbied politicians for support and in 1892, state legislator Gen. Robert R. Hemphill introduced an amendment to the South Carolina Senate that would grant women the right to vote and hold office. This amendment was voted down 21 to 14. Young and her fellow suffragists tried unsuccessfully again at the South Carolina Constitutional Convention of 1895 and, the following year, Young spoke before the state Legislature and gave speeches around the state, to no avail.

In 1899, she became the full owner of her newspaper, changing the name to the Fairfax Enterprise and operated it with an all-female staff, though there was no immediate successor to her suffrage efforts.

“When she died in 1906, it appeared the suffrage movement in South Carolina died with her,” Littlefield says.

Young also published three novels in her later years: Beholding as in a Glass (1895), A Tower in the Desert (1896) and One of the Blue Hen’s Chickens (1901) — the last of which is included in the collection of her papers held at the South Caroliniana Library.

Turn of the century

One of the great motivators for joining the suffrage movement — especially for South Carolina’s upper-class women — came in the form of a particularly contentious divorce between a couple from two very high-profile families. Lucy Pickens Dugas was a granddaughter of one of the most influential politicians in South Carolina and the Confederacy. Her husband, B.R. Tillman Jr., was the son of a controversial, but popular, politician Benjamin Ryan Tillman. The senior Tillman was serving as a U.S. senator from South Carolina when Lucy and B.R. divorced, in part, because of the younger Tillman’s heavy drinking and gambling.

In the ensuing custody battle over the couple’s two daughters, the younger Tillman “deeded” his children to his parents in 1909. In doing so, he acknowledged his own unfitness as a parent and claimed that his wife had abandoned her family. Lucy Tillman’s attorneys petitioned the state Supreme Court for a hearing in the case, citing, among other things the fame and influence of both parties’ families as a deterrent to a fair hearing in a lower court. In early 1910, the court agreed to hear the case and the details of the very public trial appeared in South Carolina papers and the case was even covered by The New York Times and the Washington Post.

Reaction to the case was overwhelmingly in favor of Lucy Tillman, as women and men expressed concern about children being taken away from a caring and capable mother. Lucy Tillman’s cause was taken up by women’s groups around the country and inspired many South Carolina women who had previously been on the sidelines to join the fight for equal rights and suffrage. It also drew outrage from many who thought that children should not be “deeded” to anyone as though they were property.

And that was the key issue in the court’s decision, which ruled that allowing children to be deeded away without consent of both parents violated the children’s rights to due process under the 14th Amendment. The state Legislature changed the law to give both parents equal rights to their children.

Part of the fallout of the case was the number of women who were drawn to the cause of equal rights and suffrage, including Eulalie Chafee Salley (1883-1975) and Emma Anderson Dunovant (1866-1956), who both fought unsuccessfully for ratification of the 19th amendment in South Carolina, which did not happen until 1969.

After Tennessee provided the last needed ratification in August 1920, both Salley and Dunovant became leading voices for political participation by women and for educating women on issues.

Salley got a business license in real estate to support her women’s rights activities and was very successful. Dunovant wrote many editorials that appeared in The State newspaper in Columbia supporting women’s right to vote and other progressive issues.

Salley later purchased Edgewood — Lucy Tillman’s ancestral home — and moved it piece by piece to Salley’s grandfather’s homesite in Aiken, where it still sits today as the Pickens-Salley House on the University of South Carolina Aiken campus. 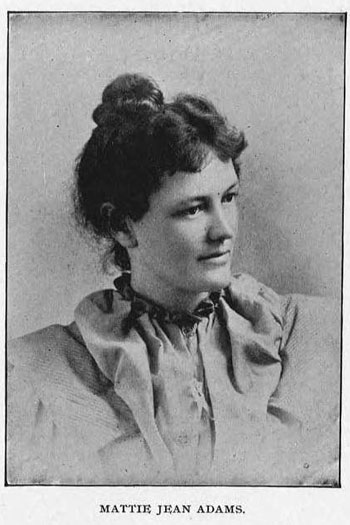 While efforts to pass the 19th Amendment in South Carolina failed in the early part of the 20th century, women were still making headway in other areas.

In 1895, Frances Guignard Gibbes became the first woman to enroll at the University of South Carolina. While she didn’t graduate, she did go on to a successful career as a poet and playwright. The first woman to graduate was Mattie Jean Adams in 1898. By the turn of the century, there were nearly two dozen women enrolled at the university, but the numbers were kept low for years, in part, because the university did not have housing for women until the 1920s.

In 1918, the UofSC law school had its first woman graduate, Claudia James Sullivan. Her degree spurred lawmakers to pass legislation allowing women to practice law in the state. Sullivan had argued her own case to win admission to the law school. “I made history for at least 30 seconds,” she wrote.

The university’s yearbook, the Garnet and Black, said: “Miss Sullivan is just one of the fellows — witness the nickname Jim. Flits about the campus chattering like a jaybird, saucy as a wren, and self-assertive as an eagle. Chafes under conventions and chimes in over every conversation. [T]he only branch of law that will be of service to her is that of domestic relations.”

For more on S.C. women in the suffrage movement, visit the South Carolina Suffragists Collection for oral history interviews conducted by UofSC historian and researcher Constance Ashton Myers in the early 1970s. 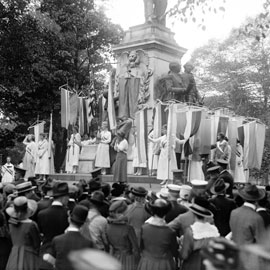 The month of August marks 100 years since the ratification of the 19th amendment giving women the right to vote in the United States. South Carolina women were a part of the fight for suffrage that started here in the years after the Civil War. Historians and librarians at the University of South Carolina have played a major role in documenting and preserving their stories.

Stories in our series

Oral History Department
The University of South Carolina is home to three oral history collections related to suffrage and the women's rights movement. Many of the interviews are available online.